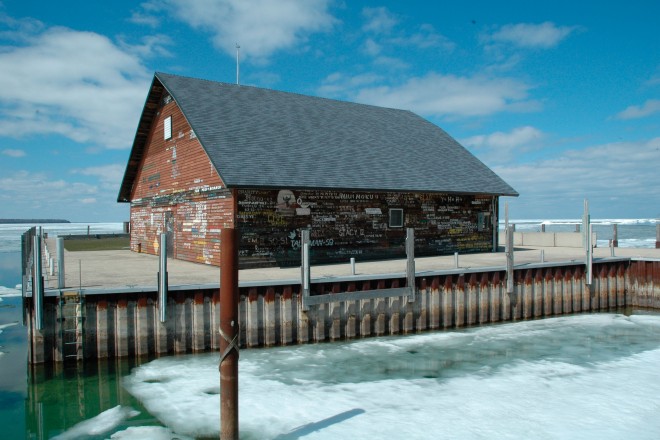 Scandinavians staying in Door County have been known to experience a more friendly type of “Stockholm Syndrome” whereby the affected travels thousands of miles to feel as if he never left home.

Case-in-point is recent Swedish immigrant Helene Ingsten-Anderson, owner of Flora Special Occasion Flowers in Sister Bay, who sees glimpses of her homeland at every turn.

“When I’m driving, something will catch my eye that’s like Sweden – a mix of trees, a meadow, even the certain placement of a farm homestead tells me it was built by a Swede,” she says.

As the view of the countryside changes in front of her windshield, Ingsten-Anderson frequently takes notice of the many Scandinavian flags displaying the Nordic cross in the colors that are particular to each country. And, there are signs in front of businesses and homes, written in Swedish, that make her smile. A sign near Kangaroo Lake on Highway 57 boasts “smärt fri” (painless), and in Ellison Bay two signs mark residences with “Mormor’s House” (the home of the grandmother on mother’s side) and “Drömmen kom sann” (Dreams come true).

Sue Antonsen Daubner, co-owner with her husband, David, of the Norwegian-influenced Sister Bay Café and gift shop, also sees the similarities between the peninsula’s landscape to the Scandinavian country she knows so well. “Just look at Door County’s inlets and bays,” she says. “And, the rocky soil is also reminiscent of Norway. The hills aren’t as high as the mountains, but there are forests and fishing – things a Norwegian would be familiar with.”

That familiarity gave rise to the Scandinavian settlement of Door County in the mid-1800s, when Swedes were drawn to the bountiful fishing off the shores of the peninsula and to Sister Bay in particular. The Norwegians, meanwhile, came to Door County for the logging opportunities and also religious freedom. Members of the Norwegian Moravian Church settled Ephraim. One hundred and fifty years later, two Moravian churches – one on the bluff overlooking Ephraim and another amidst the farmland in Sister Bay – continue to serve those faithful to Moravian worship.

The simple white-painted frame buildings that climb the hills in Ephraim are indicative of the lasting mark Norwegians have made in the small village. The Anderson Dock, Anderson Store Museum, Anderson Barn and historic Iverson House also give homage to the village’s Swedish ancestry.

Also, in celebration of the coming of spring, Ephraim celebrates the annual Norwegian festival of Fyr Bal, which includes the lighting of bonfires along the town’s shoreline.

A more recent settler to Door County, Al Johnson, kept Scandinavian authenticity foremost in his mind when he had both his log home and restaurant/gift shop built. Johnson enlisted the services of Norwegian builders, instead of Swedish builders, to construct these buildings in Norway and then dismantle and rebuild them in Sister Bay due to the complications of Swedish government “red tape.”

Johnson was raised in the Chicago area but spent six years in Sweden. He met his future bride, Ingrid Forsberg, when she came over from Sweden to work at Gordon Lodge in Baileys Harbor.

Johnson’s establishments go beyond just being true to Scandinavian log architecture. The restaurant is famous for its Swedish selections of meatballs, herring, and pancakes with either lingonberries or strawberries and whipped cream.

Ingsten-Anderson worked as a waitress at Al Johnson’s when she first came to Sister Bay in 1983. She validates the authenticity of the Swedish recipes at Al Johnson’s, but says how they’re served is all American. “In Sweden, we would use two slices of thin boiled ham, not a four-inch high stack,” she says. “And, pancakes with strawberries and whipped cream is nothing we’d have for breakfast – ever – it’s what we’d have for dessert.”

All meals at Al Johnson’s are served on plates with a blue and white Norwegian pattern. As for the famous dirndls worn by the waitresses? They’re actually Austrian. Many may have assumed the dirndls were Swedish but Roxy Wiltse, who has worked in both the restaurant and gift shops since 1974, says practicality and comfort had to be considered. Rather than outfit the women in the traditional, heavy wool of Sweden, a cooler Austrian costume was selected for an ethnic flair.

Across the street, the Sister Bay Café serves up true Norwegian fare in a dining room adorned with the Norwegian traditional arts of “rosemalling” (decorative painting) and “hardanger” (cutwork embroidery). Above the entrance to the dining room, written in Norwegian, is a table prayer.

Among the traditional menu selections are the breakfast dish of five heart-shaped waffles attached in a circular pattern with cardamon flavoring, and rice porridge with butter, cream, cinnamon and sugar. Later in the day, open-faced sandwiches on buttered bread with cold meatballs, smoked salmon or shrimp in dill sauce are served. Diners are encouraged to utilize the Norwegian custom of eating the sandwiches with a fork.

Daubner says there’s basically no difference between the ingredients in most Swedish and Norwegian dishes, including the meatballs and tinnepannekeker (pancakes).

She goes back to Scandinavian history to explain the countries’ similarities. At one time, Sweden and Norway were part of Denmark. During a Napoleonic war, Denmark lost Sweden and then offered up Norway to the Swedes. In 1914, Norway gained its independence from Sweden.

And, that’s where Lena and Ole come in.

“Because of the split, there’s a good-natured ribbing between the Norwegians and Swedes that’s going on still with the Ole and Lena jokes,” she says. Known in Door County and the northern Midwest where many Norwegians have settled, Lena and Ole jokes are a self-deprecating brand of Norwegian humor that also pokes fun at the Swedes.

In the display case underneath the café’s cash register are boxes that contain the unexpected combination of Chinese fortune cookies with Lena and Ole jokes replacing the Oriental words of wisdom. The dim but apparently happy couple graces the cover of their namesake “Lena and Ole Cookies” box.

Solbjørg’s (Sue’s), the gift shop at Sister Bay Café, sells both things made in Norway, like porcelains and woven blankets, as well as pieces handcrafted in the Norwegian tradition by Midwestern craftspeople. Among them are flat plane wooden figure carvings and the “hardanger” embroidery.

Daubner, whose husband worked for Al Johnson’s for decades, thinks of the Swedish restaurant/gift stores as a Scandinavian “Disneyland” compared to her smaller “McDonalds.” “People are bedazzled by the goats,” she says.

Ingsten-Anderson delights in the irony of the popularity of Al Johnson’s with vacationing Swedes. “Every year, my friend’s 80-year-old mother has to visit Al Johnson’s at least three times before she returns to Sweden from Green Bay,” she says.

Wiltse has also witnessed this phenomenon several times while working in the shop. “There’s more authentic Scandinavian items available in this one shop than they have in any store in Sweden because it’s all consolidated,” she says.

From clothing to figurines, Al Johnson’s brings in merchandise from all the Scandinavian countries, which in addition to those mentioned, include Iceland and (depending upon who you talk to or “Google”) Finland.

According to Wiltse, being made in Scandinavia is paramount to making a sale. “Whether it’s for the customers themselves, or a friend, it must be authentic – because it’s their heritage,” she says. “The customer wants to make sure they have it right, they want to see the ‘Made in Sweden’ in writing.”

Equally popular are the elfin figures of gnomes, trolls, nisse and tompte. Confusing one with the other truly makes for a “mis-gnomer.” Trolls have tails, and display more of an “ugly” expression and are Norwegian. The Santa-like elves with the red hats folded over to one side are either named Tompte, by the Swedes, or Nisse, by the Norwegians. The gnome, made popular by Travelocity ads, sports a red hat that sticks straight up and is of Danish origin.

Whether driving around the peninsula or skimming a phonebook, the names of businesses like Scandinavian Lodge and Scandia Cottages, both in Sister Bay, as well as the large number of Scandinavian surnames demonstrate the Scandinavians and their traditions in Door County are here to stay.

Ingsten-Anderson, whose husband Mike is a fourth generation Swede, explains the attraction this way:  “Mike is a stone mason and his Swedish relatives come from Smoland, which is littered with stone,” she says. “After 100 years of plowing and moving stone, where do they go? [To Door County] where they have to work so hard to get so little out of the soil. It must remind them of home. After all, they could have gone to Iowa.”