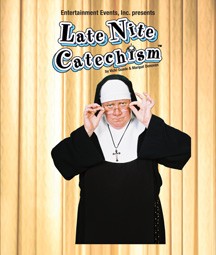 On July 19 at 7 pm the nationally acclaimed theater production/comedy of Late Nite Catechism will take the stage at the Peg Egan Performing Arts Center in Egg Harbor.

Late Nite Catechism has grossed more than $100 million in box office receipts. It has been presented in more than 410 cities around the world, has played six countries with more than 3.5 million people in attendance. The show has raised more than $4 million for retired Sisters and Catholic Organizations.

Late Nite Catechism is an uproarious piece of theater that takes audience members back – sometimes nostalgically, sometimes fearfully to the children they once were. The Irrepressible Sister teaches an adult catechism class to a roomful of “students” (the audience). Over the course of the play, Sister goes from benevolent instructor, rewarding the students for correct answers with glow-in-the-dark rosaries and laminated saint cards, to authoritative drill sergeant. These abrupt mood swings are bound to strike a resonant chord with everyone who survived the ups and downs of going to school with an omniscient authoritarian at the helm.

The Peg Egan PAC is located on Church Street in Egg Harbor, and all concerts are free and open to the public. In case of rain, all concerts will be held at the Calvary Methodist Church 4650 Country Road E, Egg Harbor. Remember to bring blankets or lawn chairs. Carry-ins are allowed. For more information, call 920.493.5979.