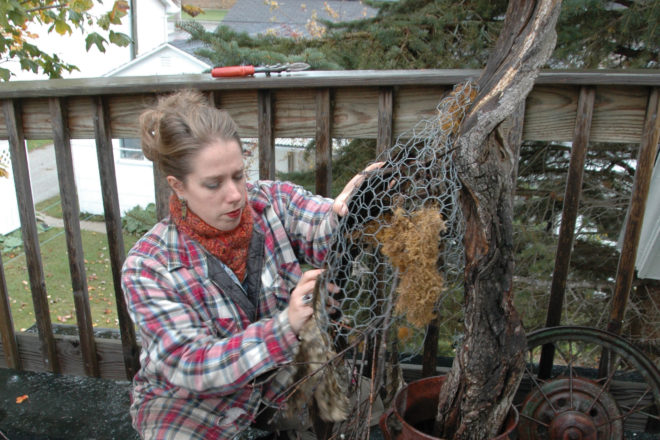 Jodi Brey takes what you might call a holistic approach to art. She is a skilled sculptor and jeweler who happens to possess the unique ability to bring her craft into a larger sphere – one that encompasses the myriad connections between environment, community and, of course, the impetus for art.

But like the story of so many artists, getting to where she is now required discovery of the direction she wanted her life to go and, importantly, the willingness to take a leap of faith to get herself there. Although Brey began her education at the University of Wyoming, where she studied social work, it was her later education that more obviously led her down the path of an artist. Brey began taking jewelry classes at Northeast Wisconsin Technical College and eventually completed a degree in Communication and the Arts with an emphasis in environmental design from the University of Wisconsin–Green Bay.

Upon return to the Door Peninsula, where her family’s roots stretch back to Ellison Bay in the 1850s, Brey began in earnest to establish herself as an up-and-coming artist. Over time she garnered a reputation as a talented jewelry designer, proving her ability to bring together her passions for both natural materials and fashion – something that is evident in her pieces, which are marked by subtle juxtapositions of colors and textures that flow through like little landscapes.

After a series of deeply life-altering personal and career changes, Brey is now headed in the direction she feels she is intended to go. She says, “If I had a message, it would be for people to find their truth and live it.” The search for her truth led Brey to begin working with natural materials and to spend time in nature reflecting and creating.

This search led her to broaden her scope into environmental sculpture, and she has since developed and implemented over 80 public projects and exhibitions. One of the first series of sculptures that Brey embarked upon is called “Entropy,” created in 2004. The series of sculptures is comprised of four pieces, one for each season of the year, and depicts women’s dresses floating against a flat plane. Brey describes the series in terms of emotion, each being a self-portrait delving into her feelings at the time of creation.

To create the pieces, Brey used materials found in nature during each particular season. “Spring,” for example, features brilliant green moss and freshly budded chive flowers (chosen in part for their ability to retain color as they dry), with the dress’s bodice made of bundled and wound barbed wire. “Summer” flows from “Spring” with a smoothly draping skirt that belies the fact it is formed of bark. “Fall,” as one might expect, brings together fallen leaves, branches, roots and wire mesh to create an image. And “Winter,” meanwhile, incorporates materials from the earlier seasons – as well as tree roots, deer hide, bark and wire arranged in uncomfortable angles – to offer a darker and more twisted representation than the others.

Her fusion of form and materials would seem to demand some analysis from a feminist perspective, but in Brey’s hands the driving force is strictly emotional; it is guided completely by an instinctive sense of materials, rather than a model of the final look. “Nature is not a material you can manipulate like fabric,” says Brey, “so I am open to what the materials tell me.” Ultimately, the process is left open and evolving, and it shows throughout her work.

The series was a landmark for Brey. Through the process of reflection and creation, she discovered what really drives her passion for art, and now works to bring those opportunities for revelation to other groups within the community. She has completed several artist residency programs, including one with Kewaunee High School. There, she recognized the need for students to bring their art into the public frame of reference, since they had no real outlet for exhibition of their work, and helped them create a public installation at Peninsula State Park, near the entrance to American Folklore Theatre.

Brey worked with the students on all aspects of developing the project, leaving many of the decisions up to them. They came up with the concept of a “flaming cone pod,” called “Forest Narratives,” comprised of three sculptures resembling dancing flames created from interwoven branches and vines. With Brey’s encouragement and direction, they spent time gathering materials, strategizing ways to use the different skills in the group, and working both within the basic space constraints of the project’s location and with the essence of the setting in mind. Of the installation, Brey notes, “These types of projects are a total leap of faith. You can’t plan this, because no one’s ever made flaming cone pods before!”

Working with community groups has really brought the larger picture of Brey’s calling into view. “For me, being an artist is about doing work that contributes positively to our society through activities that take place locally, at a grass-roots level,” says Brey. In other words, it’s not just about her own artwork, but it’s how artwork can help deliver meaning to that which it encounters.

Brey is a creative and talented figure in the peninsula’s arts community. She served as the Gallery Director at the Peninsula Art School in Fish Creek for the past six years, leaving recently to pursue a degree in community arts and expressive arts therapy. She has enrolled in a distance learning program that encourages her to keep her community roots and continue to develop her connections, while personally and academically evolving to bring more experience to the development of future community projects. She is also the grant administrator for the Peninsula Arts Association, is the recipient of numerous grant awards, and a recipient of the Fred Alley Visionary Award for community arts achievements and excellence in the arts. In all, it seems that Brey’s success in living her mission to the fullest is proof that the leap of faith was well worth it.

In 2007, Brey’s community work is marked by new artistic explorations. One project, held in conjunction with Kewaunee County’s Violence Intervention Project and Sexual Assault Awareness Month, featured a dress created through a series of 10 interactive retreat workshops. Seventeen women (survivors of domestic and sexual abuse) participated in the workshops, which included yoga, dance and meditation as the impetus for a collaborative design process. Each participant created an individual piece using wire mesh, dried fruit, and materials from the forest floor. These pieces were then assembled into the tree-like form, with cascades of fruit pooling into a skirt of moss. This outdoor installation will be placed in a mossy, woodland setting within a Kewaunee County park, creating a sanctuary for meditation and reflection. The project was awarded a grant from the Wisconsin Arts Board, with funds from the State of Wisconsin and the National Endowment for the Arts.

Another installation, part of Brey’s artist residency at LB Clarke Middle School, was recently placed at the Lester Public Library in Two Rivers. 310 students in grades five through eight participated in the project, first painting four truckloads of sticks, then cutting the sticks down and creating several hundred small triangles. The triangles were assembled into Dr. Suess-like nest formations that stand nearly four feet tall. The project made the front page of local papers and culminated with two public events at the library.

Brey’s jewelry and sculpture are on display at Edgewood Orchard Galleries, south of Fish Creek on Peninsula Players Road. Her environmental sculpture is made by commission or through community art projects. Contact Jodi Brey at [email protected] or visit her website at www.jodibreydesign.com.