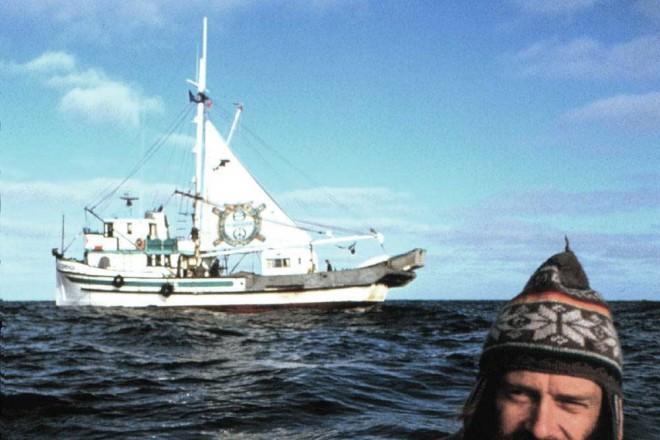 A still from the film “How to Change The World.” Submitted.

The critically acclaimed, award-winning documentary How To Change The World will be shown at the next Greens N Grains Dinner and A Movie on Feb. 18. The film, directed by Jerry Rothwell, chronicles the untold story of the birth of the modern environmental movement.

Using never-before-seen footage, it tells the gripping story of a courageous group of men and women, led by Robert Hunter, who set out to change the world and in the process sparked a revolution.

In 1971, a small group of activists set sail from Vancouver, Canada, in an old fishing boat. Their mission was to stop an atomic test bomb in Amchitka, Alaska. Chronicling this untold story, which marked the birth of today’s environmental movement and with access to dramatic archival footage unseen for more than 40 years, the film centers on eco-warrior Hunter and his part in the creation of the global organization that would come to be known as Greenpeace.

Greens N Grains Cafe offers a natural and organic dinner special before the screening. Enjoy a soup specialty, salad, a fresh baked roll and a cup of tea for $7.50, available from 6 pm on. Dinner and a Movie Night screenings take place at 7 pm and there is no charge to attend, but seating at screenings is limited to 28 people. Dinner and film reservations are requested. RSVP by calling 920.868.9999 or emailing [email protected]. Greens N Grains is located in downtown Egg Harbor at 7821 Hwy 42.