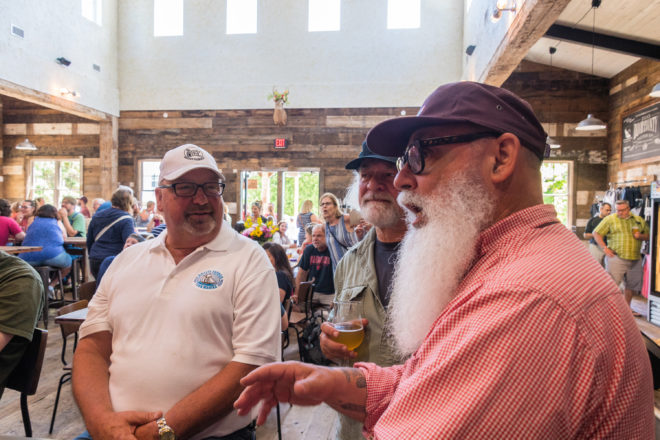 John McMahon speaks to customers in Door County Brewing Company’s new taproom. McMahon is concerned about legislation that would force breweries to go through distributors to sell in their own taproom. Photo by Len Villano.

A proposal detailed in a leaked document would prevent beer producers from also having ownership in distribution and retail, effectively forcing craft brewers to close their taprooms.

“We make beer in the back of the room and put it in a keg and put it there,” said McMahon, walking through his new taproom and production facility. “We pour it right there and the proposal says I have to pay somebody for the right to pour my own beer.”

The proposal, leaked by the Wisconsin chapter of Americans for Prosperity, bears the initials of the Tavern League of Wisconsin (TLW), Wisconsin Beer Distributors Association (WBDA) and the Wisconsin Wine and Spirit Institute (WWSI). None of these groups have confirmed their involvement in the proposal.

Producers statewide have banded together in response to the proposal, forming the Wisconsin Craft Beverage Coalition, “to promote, protect and defend Wisconsin’s vibrant craft beverage industry,” said the group in a statement.

Opponents of the proposal say the move comes because the growing craft beer and local taproom boom cuts out distributors.

Wisconsin saw a 27 percent increase in the number of craft breweries in the state between 2013 and 2015. Nine breweries opened in Milwaukee alone in 2016. Robin Shepard, author of Wisconsin’s Best Breweries and Brewpubs, told Wisconsin Public Radio that two breweries are opening every single day in the United States. Many of these breweries operate their own taprooms where they sell the beer they produce and distributors are left out of that transaction.

There is no bill in the legislature yet, but brewers fear the change could be placed in the budget, which has housed other controversial regulatory changes in the past. Gov. Scott Walker was supposed to sign the biennial budget by July 1, but has not done so due to continued stalemates over topics such as education and transportation budgeting.

“The craft brewers weren’t even notified,” said McMahon. “We’ve been putting a lot of pressure on the legislators to not pass it and we’re getting a really positive response from them.”

McMahon said he is happy with his current distributor, Flanigan Distributing, but the proposed changes would require brewers to pay distributors even if the distributor is not actually handling the product.

“It doesn’t even leave the building but I would still have to pay a distributor,” McMahon said. “It never goes into anything that can be distributed.”

The proposed changes would closely resemble distribution regulation placed on wineries in 2007.

“To our craft beer making friends, I can say god bless you,” said Tim Lawrie, owner of Simon Creek Winery. “You’re going to get shafted just like we did.”

Lawrie traveled to the state capitol as part of Door/Kewaunee Legislative Days in 2015 to lobby against changes made to winery distribution under Wisconsin Act 85 in 2007.

“Everyone has to take their share of the pie as it goes down the line,” said Lawrie. “Our margins were cut significantly.

“One or two wineries in Door County also own a restaurant and for them to get their own wine in their own restaurant they have to sell their wine to a distributor and turn around and buy it back. That’s one of the dumbest things I’ve ever heard.”

Lawrie has spent the last 10 years trying to change the rules back to what they were before 2007 without success.

Walker is expected to sign the budget in the next few weeks. If this proposal is not inserted into the budget as part of a last-minute 999 motion, it will need to go through the traditional legislative channels, giving brewers a chance to provide input on the changes.