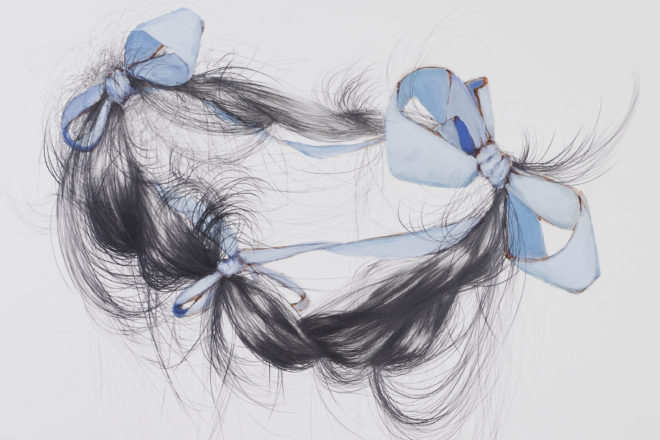 “Crown,” graphite and gouache on Yupo by Lesley Wamsley.

Brooklyn artist Lesley Wamsley offers an artistic perspective of issues related to objectification, likability and its ties to female worth in her series, Likable, now showing at Algoma’s James May Gallery.

Featuring detached hair forms woven into braids and decorated with delicate ribbons, the collection of drawings imbues purity, innocence and congeniality. The works, created in the summer of 2016, were originally intended as a technical exercise for Wamsley to replicate the unique way light reflects off hair.

But after watching the 2016 presidential election unfold, Wamsley revisited the drawings and slowly realized a link between their content and America’s political and social attitudes toward women. 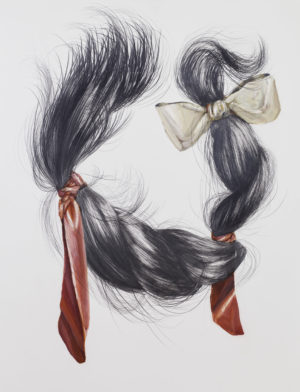 “So Rococo,” graphite and gouache on Yupo by Lesley Wamsley.

“The election demonstrated unequivocally our cultural demand that women be perceived as likable,” Wamsley wrote in her artist’s statement for the series. “More important than education, strength, and experience, the campaign proved that the socially acceptable woman is, above all, agreeable.”

Wamsley draws on these perceptions to craft a narrative for Likable, one associated with beauty and its reflection on a woman’s perceived sense of power.

Hair, as the dominant visible trait of femininity, has become a marker of attractiveness and youth in women. In The Handbook of Evolutionary Psychology, a passage on female hair quality reveals a correlation between hair length and perceived beauty, health and fertility, with long hair viewed as most desirable across cultures.

As women age and their hair thins, falls out or turns gray, it can signify a loss of beauty and therefore, power.

“It’s also a symbol of youth,” Wamsley said. “In the culture, youth is also fetishized; we’re a very youth-based culture so it’s also about this type of endless girlhood, keeping women in a place where they’re never fully empowered. They’re always in this state where they’re trying to feel forever young.”

The hair forms in Wamsley’s artwork are detached from the physical body and presented as an object that belongs to the public rather than the individual who truly owns it.

This facet of the artwork highlights the artist’s interest in, and conflict with, internalized sexism. Wamsley acknowledges the demands American culture places on women to look and act “socially acceptable,” and her own willingness to meet those expectations. Her drawings articulate this cycle, and arrive in the peninsula at a particularly interesting time in American culture, as revelations and allegations of sexual assault and harassment in politics, entertainment and the workplace dominate public dialogue. 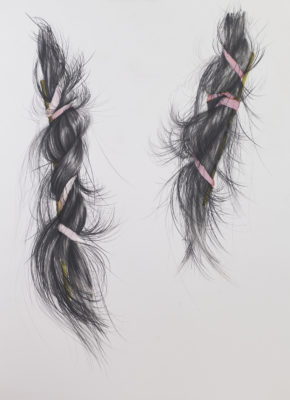 “Scalped,” graphite and gouache on Yupo by Lesley Wamsley.

These situations have forced Wamsley to confront her own knee-jerk reactions to reports of sexual harassment, which she notes have been a complicated mix of sympathy toward perpetrators and a realization of sexual harassment situations in her own life. These reactions and their prevalence in American attitudes toward women have served as the basis of the #MeToo Movement, encouraging women and men to speak out about sexual violence and harassment.

“It’s been fascinating for me to hear people’s stories and say, ‘That’s happened to me, and I didn’t even realize I was being sexually harassed because it was so normalized that that was okay to do that and treat people that way,’” Wamsley said.

As she continues exploring feminist themes through her artwork (she is currently working on a series that explores aging and mortality), Wamsley expressed her hope that in 2018, women are empowered to stand up for themselves in situations of sexual harassment, “to understand we don’t deserve this and this isn’t just the price you pay for being a woman.”

James May Gallery is located at 213 Steele St. in Algoma. For more information on the exhibit, visit jamesmaygallery.com. Wamsley’s work can be viewed at lesleywamsley.com.