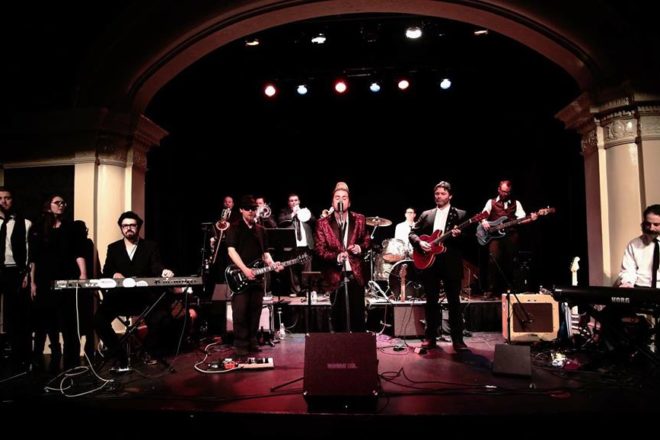 Cooper and his band have been nominated for multiple Wisconsin Area Music Industry (WAMI) awards for categories including Male Vocalist of the Year (Cooper) and Best Horn/Big Band. Winners will be named during WAMI’s awards show April 19 at Milwaukee’s Turner Hall Ballroom. Submitted.

After the departure of Stephen Cooper’s fellow singer and songwriting partner, Ruby James, from WiFEE and the HUZz BAND, Cooper sought to capture the same huge sound and danceability in his newest project, Stephen Cooper & The Nobody Famous.

Digging into this album, I quickly discovered that the quality of musicianship and composition it features is almost unseen in northeast Wisconsin.

Similar to the style that Cooper’s developed over 25 years, he finds a great balance between mimicking exactly the music that inspired him and adding eccentricity, without being unrelatable to listeners. He includes many aspects that are authentic to music from the ’50s, ’60s and ’70s, but he manages to keep it appealing to all ages by employing universal themes in his lyricism, such as love, breakups and the power of dance.

If I had to describe this album in a single word, I would say “lively.” It’s not music I’d listen to if I were trying to relax or calm down; it’s more the type of music to jam out to in the car or serve as a soundtrack for a bedroom dance party.

It’s often dynamically and melodically unpredictable, which is in part why it’s so exciting. This musical eccentricity is evidenced in “It’s You,” in which the guitar opens the track with gentle, innocent waltz-style arpeggios, only to be pleasantly punctuated by the rest of the band in a series of punch-in-the-face-style hits.

Although listening to this album through headphones isn’t nearly as exciting as seeing Stephen Cooper & The Nobody Famous live, it does a great job of replicating the energy of a live performance by offering a distinct variation in the mix and staying relatively light on vocal and instrumental effects.

It’s hard not to be enthralled by Cooper’s vibrato-heavy, soulful and dextrous vocals on this record. And it’s easy to see how much his vocal and musical inflections are inspired by Motown and R&B greats such as Al Green, Otis Redding and Stevie Wonder. He proves his ability to seamlessly transition from a percussive and wobbly modulation in a track such as “Three Shades of Black” to a more legato style that’s fitting for a track such as “I Love You More Than You’ll Ever Know.”

The only thing as evident as the emotion in his voice is the emotion in his saxophone playing. Cooper has incredible range for a tenor player, and his licks and style resemble the chops of Saturday Night Live bandleader and former Tower of Power saxophonist Lenny Pickett. Cooper exhibits this toward the end of his Fats Domino-esque track “Don’t You Dare Say Goodbye.”

On this album, Cooper’s 13-piece band complements his singing and playing perfectly. The horns are arranged to be conversational with Cooper’s melodies, often playing long tones in the background to bring out the vocals and emphasize harmony tones, and at other times, playing their own melodies in response to the vocal parts. The characteristics of these horn arrangements are on display in the album’s title track, “My One and Only.”

What Cooper and his band sacrifice in conforming to Motown and R&B musical dogma, they make up for with the inventiveness of their soloing. On “Breaking Up Somebody’s Home,” a few of the band members demonstrate their improvisational prowess with a trilogy of virtuosic solos.

I wasn’t sure whether the quality of the Cooper’s songwriting and arranging would diminish after WiFEE and the HUZz BAND disbanded, but after listening to this album, I can say that Stephen Cooper & The Nobody Famous is equally – if not more – exciting, fun and dance-eliciting as Cooper’s past projects. This album is definitely worth a listen and maybe a few dance moves, and I hope it grows in popularity to the point where the band name and album title no longer make sense.

Cooper and his band have been nominated for multiple Wisconsin Area Music Industry (WAMI) awards for categories including Male Vocalist of the Year (Cooper) and Best Horn/Big Band. Winners will be named during WAMI’s awards show April 19 at Milwaukee’s Turner Hall Ballroom.