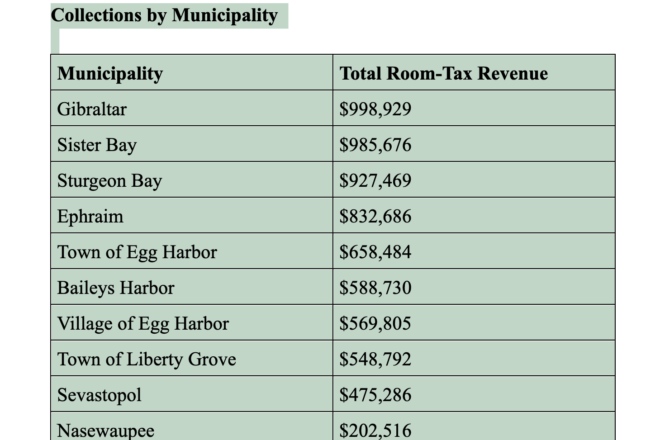 With December’s room-tax report now in, the growth of tourism in 2021 can only be described as explosive.

Lodging revenues for the year were up a staggering $38.7 million over 2019, the last full year prior to COVID-19 restrictions. Hotels, inns and vacation rentals pulled in $133.3 million, compared to $94.7 million in 2019. Revenue was buoyed by a 17% increase in the average daily room rate, skewed to a degree by the increase in the popularity of vacation-home rentals.

But the gross number of lodging nights filled also boomed by 20%: an increase of 112,055 nights filled over 2019, despite the number of nights available growing by just 5,562.

“We’re still not sure how much of it is lag from 2020 from people who didn’t get out and wanted to travel in 2021, versus more permanent change,” said Juliana Behme, Door County Tourism Zone administrator.

Those numbers will only increase as receipts from late-reporting properties come in. Behme said there are reports outstanding from 92 properties for the year.

Total room-tax collections for the year grew from $5.1 million to more than $7.3 million. Thirty percent of that revenue – $2.18 million – goes into the coffers of local municipalities. That’s $640,262 more going back to the 19 villages, towns and cities that make up the Door County Tourism Zone, allocated based on collections in each community. Four percent of returns goes to the Tourism Zone, and 66% goes to Destination Door County for tourism promotion and development.

Sister Bay leapfrogged Sturgeon Bay to move into second place in room-tax revenue behind the Town of Gibraltar, which has led the county in room-tax returns since the Tourism Zone was created in 2007. Much of Sister Bay’s growth can be traced to the opening of the 47-room Dörr Hotel in May 2021 and the expansion of Open Hearth Lodge.

It’s conceivable that once late reports come in, the Town of Gibraltar will surpass $1 million in returns, making it the first time an individual community has surpassed $1 million in room-tax revenue. The Town of Baileys Harbor moved into sixth in revenue, surpassing the Village of Egg Harbor.

“Even with our 13 additional rooms, our occupancy rate across the board was higher than in 2019,” he said. “We were a little surprised.”

Zacek said it’s too soon to consider 2021 the new baseline, but he’s hopeful.

“I’m skeptical based on conversations I’ve had with customers,” he said. “A lot of people were coming here for the first time and said they came because other travel was limited.”

But that also means a lot of travelers were introduced to the county for the first time and may return. In addition, Zacek points to the growth of Door County as a wedding destination – particularly the Northern Haus venue down the road from Open Hearth – as well as events such as the Christkindlmarkt, which brought many December visitors. One reason to believe the trend will continue? Advance bookings are up for his business.