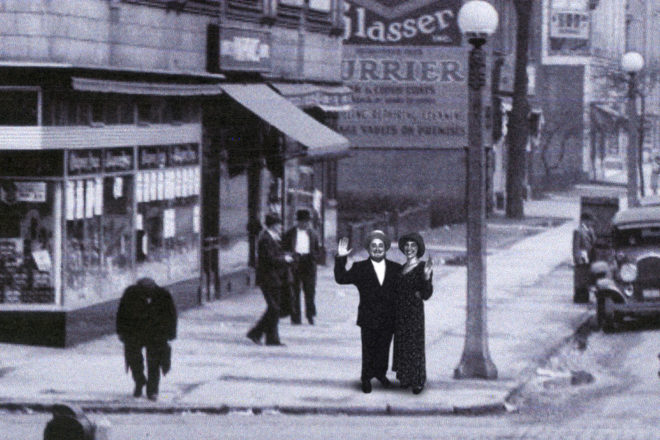 “In 1986 my daughter and I were rummage sale-ing,” Washington Island resident Donna Russell recalled, “and we found a man who had trunks for sale. I bought two but one was locked and he had no key for it. I hauled them to our garage and there they sat for many years, until my husband and I decided to move to Florida.”

Her husband wanted to take them to the dump but she wanted to look in the locked one first. “He broke the lock,” she said, “and I found hundreds of letters!”

In addition to the correspondence written during the 1920s, she discovered other memorabilia of that era along with items of clothing.

The find inspired Dear Rhoda, the original play that will be performed by the Island Players from June 17-19.

Donna and Larry Russell first came to Washington Island in 1978, and moved there permanently in 1986 to run the Sailor’s Pub Restaurant. That was the year that she made her rummage sale purchase.

“The letters in the trunk haunted me,” she said. They were written by a man named Jerry Nedwick to a woman named Rhoda Katz. 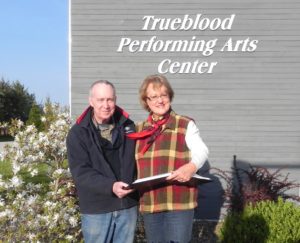 “I thought I could write a book,” she continued, “but I didn’t know how.” She had never written anything longer than a grocery list, she joked, but began writing dramatic scenes because she could hear music and see dancing when she read the letters. She did the best she could because she felt the letters documented a love story that needed to be told.

Dave Ranney was a retired professor of applied economics who had taught at the Chicago campus of the University of Illinois. He had been visiting Washington Island since 1984 and 10 years ago became a resident. When he learned of Russell’s project, he offered her assistance.

Although Ranney’s professional expertise was economics, his father had been a theater critic for the Cleveland Press and his mother, managing director of a Shakespearean company. As an avocation he had been acting and directing for Island Players productions. And as an academic, he was comfortable with the research that helped trace the route of the letters from Chicago, where bookstore owner Jerry Nedwick fell in love with Rhoda Katz. She contracted tuberculosis and spent two extended periods of time away from him while she was receiving treatment in sanitariums.

Ranney learned that Nedwick had purchased a home in Chicago on Prairie Avenue, that a factory wanted to buy houses in that area to tear down for a parking lot, and that the attorney sent to negotiate the deal fell in love with the Nedwick home and bought it, saving the building from the wrecking ball. Later that woman moved to Washington Island where she ran an antique shop called The Vagabond (later housing the Fiddler’s Green Cafe).

Connecting dots, Ranney theorized that the trunk had been left in the Nedwick property and was transported from Chicago to Washington Island where it became inventory in the retail shop and was purchased, only to be later resold at a rummage sale.

Unfortunately the letters that Rhoda Katz wrote replying to those of Nedwick did not survive.

But Ranney’s research found information about the bohemian Tower Town neighborhood in Chicago where the couple lived, the bookstore Nedwick owned, the night spots that he and Rhoda frequented (among them the Dill Pickle Club), and the entertainers they enjoyed (including the famous singers Sophie Tucker and Fanny Brice, and the well-known poet Carl Sandburg, who read his verse and sang folk songs).

“Donna and I talked about the question of what kept them together when they were separated by the sanitariums and the threat of death,” Ranney said. “We came up with three things: their physical attraction, their love of literature and poetry, and their politics as anarchists belonging to the IWW,” the Industrial Workers of the World, known as the Wobblies, a group that came under critical government scrutiny.

“We decided that Jerry’s letters would be used to reveal these three elements of the attraction,” he continued. But they had no letters from Rhoda.

“‘I thought you could become Rhoda,’ Dave said to me,” Russell explained. “I tried, but it took a couple of bottles of wine!”

She drew upon her marriage of almost 50 years, imagining how she would respond emotionally if separated from her husband.

Through the collaboration of Russell and Ranney, Rhoda and Jerry became fully realized characters, dealing with anti-Semitism, persecution for their political views, and the anguish of separation. Their drama occurs with the backdrop of flappers dancing the Charleston, performances of live music, and the staging of a Jewish wedding.

The script for the play evolved through a workshopping process that included critiques from professional directors, a preview performance on the island last summer, and input from the cast and crew – more than 40 islanders are involved in the production.

Rhoda is played by Rylee Johnson (who wears some of the vintage clothing found in the trunk), and Jerry, by Jim Sorensen. Cindra Hokkanen and Kristi Larson sing as Sophie Tucker and Fanny Brice, and Julian Hagen portrays Carl Sandburg.

“I’ve learned so much!” Russell said looking back on the development of the play.

“It is the most difficult of the plays I’ve directed.” Ranney said.

Their plans for the future? To spend more time with their spouses, they agreed. But they hope that the play will live on after its production on the island this month.

“It needed to start here,” Russell said. “But it needs to go on and be told, a wonderful story. Chicago would be a good place for it to be performed.”