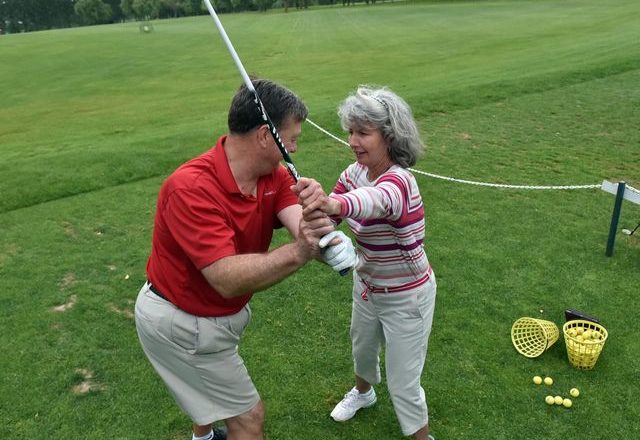 Julie Pyne has played tournament golf as both an amateur and a professional, competing on the Ladies Professional Golf Association (LPGA) tour for seven years. This summer, Pyne will bring her knowledge of the game to Door County, offering lessons at the Bay Ridge Golf Course over a six-week period.

Pyne made clear that her golf career was not something that she ever planned out or anticipated. Originally, her skill on the green served as a means to move forward in her schooling.

“I started playing when I was a freshman in high school and…well, the coach really needed a warm body,” Pyne explained. “I didn’t take it seriously until my sophomore or junior year. It was at that point I started thinking, ‘Hey, I can beat that girl if I practice.’ I ended up winning high school state my junior year, right when Title IX passed. After that, my golf coach said to me, ‘You know, I think you might be able to get a golf scholarship.’ I was expecting to go [to college] but I didn’t know how, and this was like an open door for me.”

Pyne approached her golfing career from a similar angle once she was at Arizona State.

“I was taking my golf seriously because I wanted to maintain my golf scholarship. I was playing all these national amateur tournaments and I played in the Open as an amateur.”

The January after graduation, Pyne decided to go out as a full-time professional.

“I figured I’d give it a shot, what the heck,” she said of her decision to go to the LPGA qualifying school. “It was all like a day at a time. It wasn’t like I had any of these grand visions.”

During her career, the golfer competed in more than 150 LPGA tournaments and six U.S. Opens. At her peak, she was ranked 31st in the world.

Pyne maintained her “day-at-a-time” attitude throughout her period with the LPGA, eventually deciding that she was ready for the next stage of her life beyond professional golf.

“When I was 29 and I had been playing for seven years, my husband and I decided that it was time to start a family,” she said. The pair now has four children.

“Now as a coach it’s fun. I get kids involved and engaged,” Pyne enthused.

Pyne first learned about Bay Ridge from a friend.

“I was coming up anyway to coach the First Tee,” she explained. “I had talked to Sylvia Ferdon, a good buddy of mine – she told me about Bay Ridge. I met Dianne [Trenchard] and Kristy [Champeau-Nelson] and they are such a delight. When I met them I thought it would be very neat to promote other businesswomen.”

The Bay Ridge lessons will be every Wednesday from June 15 to July 20, and are open to new and experienced golfers alike.

“It’s a one-hour clinic and limited to 10 just for more individual attention,” Pyne explained. “We cover chipping, putting and hitting each week, so each class can stand alone. If they come back the next week then I can pick up where we left off.”

Pyne is excited to share her expertise at Bay Ridge this year, as she understands the satisfaction and pleasure that can come from having a solid understanding of the game.

“I will say this: as a coach and as a parent of athletes, good instruction is something you can’t substitute,” Pyne asserted. “Having instruction is a way to make the game a lot more fun. I hope in my lessons to help people enjoy the game more.”