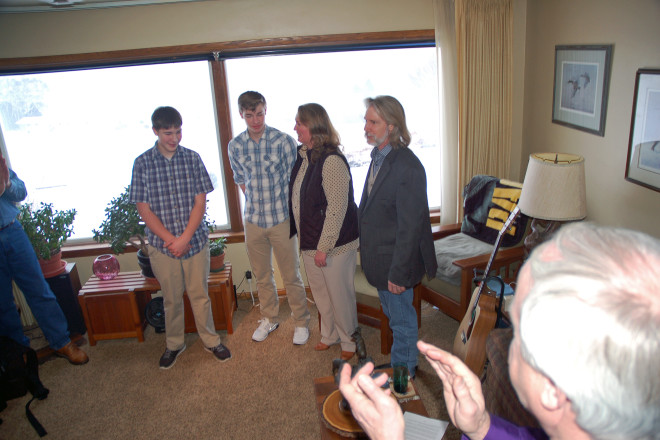 The same week he learned that he and his wife Nancy made the Wisconsin Department of Natural Resources “Do Not Respond” blacklist, Kewaunee County farmer and clean water advocate Lynn Utesch announced his candidacy for the 1st District Assembly seat.

Describing himself as a farmer, veteran and clean water activist, Utesch gave his announcement speech March 1 at the home of Dale and Mary Goodner of Algoma, alongside his wife and two of their five children, sons Hakkon and Sam. In addition to friends and colleagues, the event was attended by Democratic Sen. Dave Hansen of Green Bay. 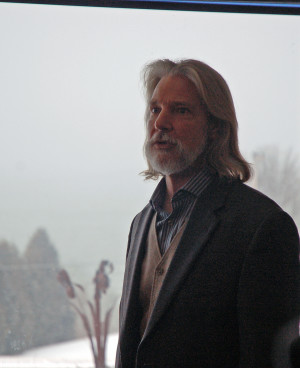 “After the last two years of watching our legislature and watching the issues that are occurring in the 1st Assembly District, it became very apparent that we needed a change,” Utesch said. “I decided it was time for our elected leaders to quit telling us what they can’t do. It is time to have a leader telling us what we can do. I will be that leader. For far too long, the people have been talking to our leadership, but they have not been listening. Going forward, I will listen to the people of the 1st Assembly District.”

The Utesches are founders of the clean water advocacy group Kewaunee CARES, which, among other things, has been documenting the continued pollution of once-healthy trout streams in Kewaunee County, and which is probably how they made the DNR’s blacklist. Last year the couple was awarded the Door County Environmental Council’s Citizens of the Year award.

Utesch mentioned that he and his family have lived in the 1st District for more than 25 years. Up until 2004 when they bought a 150-acre farm in Kewaunee County to raise grass-fed beef, the family lived on Washington Island, where Utesch worked for GTE Telephone, farmed and served on the town board.

“For the last decade, my family and I have been working on clean water issues here in Kewaunee County and in Northeastern Wisconsin,” Utesch said. “We have seen a degradation of the conservation ethic here in Wisconsin. It is time to restore the ethics we were given by John Muir, Aldo Leopold and Gaylord Nelson.”

Utesch pledged that if elected he would listen to all constituents.

“Too often, what has been taking place in Madison is that the citizens are not being listened to,” he said. “It is time that we have open and transparent government for the people.”

Sturgeon Bay veterinarian Joel Kitchens was elected from among a crowded Republican field of candidates to represent the 1st District in 2014 after incumbent Garey Bies announced he would not seek an eighth term in the two-year office. Kitchens has yet to announce if he will run for re-election.

Utesch said it was encouragement from others that helped him make the decision to run.

“Joel just was not fulfilling what he promised when he ran,” Utesch said. “People started contacting me. It’s a big decision. We talked as a family. We are farmers and had to look at the logistics of it, to see if it would work. But this is too important not to do it.”