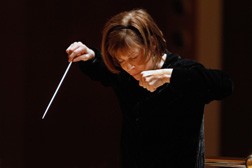 When JoAnn Falletta conducts the Aug. 20 Peninsula Music Festival Crossing the Channel concert, she will have the distinction of being the first female to conduct a full concert in the music fest’s 61-year history.*

She got to know Wisconsin as associate conductor of the Milwaukee Symphony from 1985 to 1988.

Falletta remembers the moment when she set out on the musician’s life.

“I started out studying the classical guitar,” she said. “My 7th birthday was my first lesson. I remember it so clearly. It was the beginning of my life as a musician.”

But she also clearly recalls when her heart and mind were captured by the majesty of the orchestra.

“I was about 10. It was at Carnegie Hall and I was with my parents and sister. It was Beethoven’s 6th,” she said. “I forget who the orchestra was or who the conductor was. I know it was a man. I was just enchanted with it. I remember at the end of the concert, the conductor turned around and said, ‘Since you enjoyed it so much, we will play the last movement again.’ I remember my father next to me groaning. It probably wasn’t a very good performance, but to me it was magic and I was so thrilled to hear the last movement again. I had to be in the middle of that sound. It stayed with me all my life because it seemed to me to crystallize wanting to be a conductor.”

Not willing to take credit for opening doors for other women, Falleta says she was just in the right place at the right time. 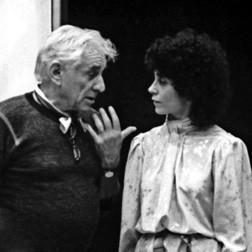 “I think I became a conductor at the right time for the world to open for woman as conductors,” she said. “I didn’t even know as a young person that it was unusual for a woman to become a conductor.”

Her job as conductor, she said, is to “create a landscape where excellence can flourish. It’s a meeting of the minds so that we can together communicate to the audience.

“Guest conducting is something completely different because you go to somewhere you don’t really know, which is a challenge, but a wonderful challenge, working with musicians you probably don’t know, for an audience you don’t know and that doesn’t know you. You have one to three days to put everything together and say something together. That’s very challenging, but it’s a great deal of fun to do that. It’s going to be a great discovery with people I haven’t met before.”

The invitation to conduct at the Peninsula Music Festival came from Music Director Victor Yampolsky.

“I had known about Victor and heard about him from countless people, but we never met. Until, strangely enough, in Santiago, Chile,” Falletta said. “I was guest conductor there and he was coming in for the next week. He came to my final concert and came back and introduced himself. He was totally charming. This was a couple of years ago. He said, you really should come to the festival.”

The Crossing the Channel concept for this concert came from Yampolsky, Falletta said.

“Victor had a wonderful concept of a French program, although it’s not completely French. But I love French music, so this is perfect,” she said. “We’re doing three French suites – Ravel, Faure and Bizet, a wonderful collection of music, very different of course. All three are fabulous color pieces for the orchestra. And in the middle of that, is the Bruch Scottish Fantasy, which is from a completely different place. It’s filled with northern folklore and this sense of misty coldness. A very wonderful piece. Caroline Goulding (violinist for the Bruch piece) is someone I’ve heard but have never worked with. She’s come to Buffalo, but I wasn’t conducting when she was here. So I’m thrilled to have a chance to do this with her. I can’t wait to get there.”

• Yuchi Chou will actually be the first female conductor to appear at the Peninsula Music Festival when she conducts Mozart: Overture to The Impressario, K. 486 at the Aug. 17 all-Mozart evening as part of the Emerging Conductor program.

The Peninsula Music Festival continues through Aug. 24 in the Door Community Auditorium, Fish Creek. Tuesday and Thursday concerts are at 8 pm with Saturday concerts at 6:30 pm.