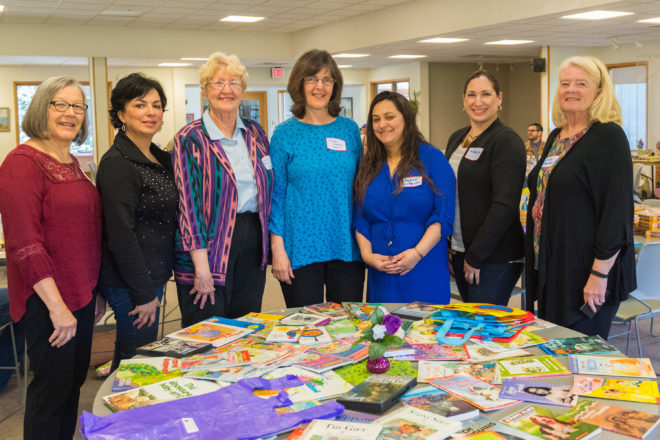 Literacy Door County celebrated their first annual Student/Tutor Recognition event on May 7 at Hope Church in Sturgeon Bay to acknowledge the hard work and commitment both the students and tutors have made. Photo by Len Villano.

Two years ago, social worker Pat Scieszinski of Sturgeon Bay was thinking about things she’d like to do when she retired in May 2016, knowing that she wanted those things to make a real difference in someone’s life. Encouraged by a friend, she attended a meeting of Literacy Door County (LDC, Inc.) and was intrigued. She enjoyed the four-hour training session for tutors, but told the leaders that she wouldn’t be able to start for a year. 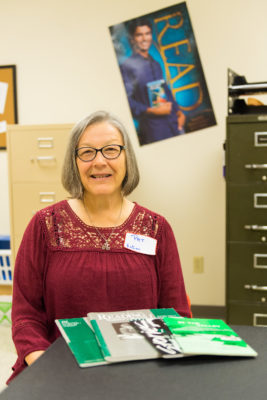 Last May rolled around, and the literacy group contacted Pat, who said she’d like to have the summer to settle into retirement, but would be ready to begin tutoring in the fall. She was looking forward to sitting down with an older adult who needed to improve – perhaps even start from scratch – on reading and writing English.

In September, she got another call. A student was waiting for her – Yanira Gil from El Salvador. Yanira (pronounced Janira) had a sixth-grade education and spoke almost no English. Pat’s first shocked reaction was, “There’s no way I can do that. The only foreign language I’ve studied is French, and that was 30 years ago. How could I possibly teach a Spanish-speaking person who knows no English?” “If you won’t do it, there’s no one else,” was the response of Peggy Sankey, the LDC president. So, of course, Pat said yes. “It was a case of being better than nothing.”

The two women met for the first time last October in the LDC classroom at Hope United Church. Pat learned that Yanira met her husband, Daniel Rodriguez, in church in her hometown, where he was training with the U.S. Coast Guard. They married a month later. Her two sons, Christopher and Justin, have their mother’s last name, as is the custom in South-American countries. Yanira had never traveled out of El Salvador until she came to Wisconsin. In 2016, Daniel was transferred to Sturgeon Bay.

English/French (sort of)-speaking Pat and Spanish-speaking Yanira formed an immediate bond. They began with Pat touching an object like a table and saying the English word for it. Yanira repeated it, then said its equivalent in Spanish. The next step was the alphabet, beginning, as with a preschooler, to associate each letter with a sound, learning words that begin with or include that sound, associating the words with pictures, then tackling the variations in pronunciation that make English so tricky.

It didn’t take Pat long to realize that Yanira was an excellent student. “She’s very bright,” her tutor says. “She is determined, she is enthusiastic, she wants to learn and she learns fast.”

Like many other literacy programs, LDC uses the Laubach method materials, with a tutor’s guide and student workbooks that introduce new words, include them in little stories and encourage the student to use them in written and spoken form. Pat uses lots of outside materials, such as the map of El Salvador she brought to the first class so Yanira could show her where she grew up.

She encourages activities that are both fun and practical. For example, when Yanira mentioned that she likes to go out to eat with her husband, who always orders for her, Pat asked if she’d like to surprise him by ordering for herself. Yanira thought that would be fun, so Pat copied Scaturo’s Café’s menu, and Yanira learned to read and pronounce the names of the items she likes best. She hopes to surprise Daniel – if he doesn’t read this first.

Yanira had three goals when she enrolled in the literacy program:  to get her driver’s license, to pass her GED (General Education Development) certificate and to get a good job. On the morning she and her tutor were interviewed, Pat brought a new little story about preparing to take the driving test – not knowing that Yanira had an appointment to do so that very afternoon. (It might be encouraging to other Spanish-speaking people in the community to know that they can study for both the written driver’s license test and the GED exam in Spanish.) Yanira studies two mornings a week with Pat and two mornings at NWTC in Sturgeon Bay, preparing for her GED. Both programs are free.

Yanira was sad when she completed the first workbook, because she mistakenly assumed that was the end of her literacy studies. She’s now sailing through Book 2, Focus on Phonics, with two more to go. She and Pat are also using a book called English Made Easy that teaches through cartoons with conversation balloons.

Asked her motivation for learning English, Yanira didn’t hesitate. “I live here,” she said. It’s obvious that she enjoys and appreciates the opportunity to learn.

For Pat, working as a literacy tutor is the most rewarding volunteer job she’s ever had. Although tutors traditionally move on to another student when their current ones achieve their goals, she says, “I’d love to work with Yanira forever.”

Peggy Sankey and Betsy Rossberg started Literacy Door County, Inc. about two years ago, with a lot of assistance and encouragement from Bob Garfinkel, president of Literacy Partners of Kewaunee County, who has been active in that program since 2006. Both women were trained to become tutor trainers by Literacy Partners of Kewaunee County and Literacy Green Bay, which has been in existence for more than 30 years.

Sankey, who is president of LDC, says their tutors are trained following guidelines established by the ProLiteracy organization. LDC provides free one-on-one tutoring to adults who want help to improve their speaking, reading and writing skills. “We tutor immigrants seeking help with citizenship requirements and native English speakers who want to improve their reading and writing skills,” she says, “and also provide help with skills needed for job advancement.”

At this time, LDC has 15 tutor/student pairs, most of whom meet one or two hours a week. One student just passed her test to become a U.S. citizen, and another is waiting to take the citizenship test. Two students are studying for GED certification. Most of the students are immigrants, eager to learn so they can take part in school conferences at their children’s schools or take part in community life.

Peggy says that most people have no idea how diverse Door County is. Current LDC students come from six different countries. Last year, LDC provided more than 670 hours of training to adults.

For more information about becoming a literacy tutor or student, call Peggy Sankey at 920.743.8185.