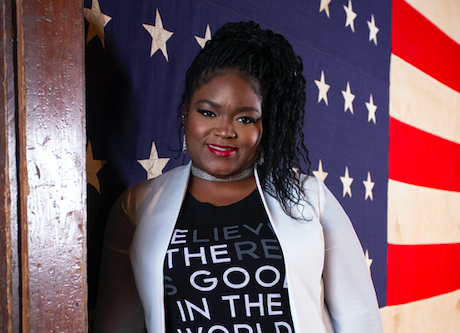 Shemekia Copeland will perform at the DCA on Sept. 21. Submitted.

Shemekia Copeland’s son changed the direction of her music

Shemekia Copeland – who will bring her band to the Door Community Auditorium Sept. 21 – joked that she became a beauty pageant contestant upon the birth of her son two and a half years ago.

“I was 38 years old when I had him. You think at 38 years old, not much can change you,” she said and laughed. “I immediately changed into a beauty pageant contestant because all I wanted was world peace and to make the world a better place somehow for him.”

Before his birth, she said, “You just exist and think, this is what it is. It’s crappy, and that’s that, with not a whole lot of thought about changing it.”

But her newfound vision is on full display in her 2018 Alligator Records release, America’s Child: her eighth release on the Chicago record label founded by Lawrence University alumnus Bruce Iglauer.

The record kicks off with a stinging song called “Ain’t Got Time for Hate,” in which Copeland sings, “Breathe the same air, bleed the same blood … One more moment is a moment too late, we ain’t got time for hate.”

She follows that with “Americans,” which pays tribute to the human melting pot of this country, from “an Elvis impersonator” to “a slick-haired deplorable” to a “Mexican pin-up girl” to “a hermaphrodite socialite sipping on a cold Bud Lite … Americans. Still free to be you and me.”

Then she confronts racial division at its most basic with the song “Would You Take My Blood?” In this song, she asks a direct question of a racist: “Would you take my blood? Or would you rather die than share your life with mine?”

The message throughout this recording is clear: Collectively, we have some weird hangups from another time that deserve to be left behind. It’s time to move on to the place this was meant to be. The record’s producer and guitarist, Will Kimbrough, succinctly sums up Copeland’s singing as “humanity made vocal.”

“Even before that [recording],” she said, “I wanted to put out messages to help people, but it was more about domestic violence, date rape, social injustice and religious hypocrites. Now it’s more about peace for me, and how can we bring people together in this world where everyone seems to be so separate with so much hate going on.”

Copeland’s musical journey began at the side of her father, the late blues composer/guitarist/singer Johnny Copeland.

“It all started with Daddy, sitting around the house playing his red Ovation guitar, and me watching him, listening and singing along,” she said.

And that’s as far as she thought it would go: singing at home with her dad.

“I was very shy. Earlier on, I was super shy,” she said. “In fact, I never thought I would ever be able to get up in front of people and perform like my dad did. That was kind of crazy to me. It was one of those things I thought I would never be comfortable with.”

Her first stage experience came when she was nine years old, and her father called her on stage at the Cotton Club in Harlem to sing a song he had written for her. Three years later, he arranged for her to put on her own show at the Cotton Club with a band he hired to work with her. Seven years later, at age 19, she made her recording debut with the critically acclaimed 1998 release Turn the Heat Up.

“I started so young,” Copeland said. “It wasn’t until I got older and got comfortable in my own skin and became accepting of myself – that’s when everything changed for me. Then it became, you know what, this is who I am. This is the skin I’m in [that] God gave me to work with. So I’m going to work with it and move on. That’s what changed for me. That takes time to get there. It does not happen overnight. It came with age, and I felt really good about it.

“Some people never become comfortable with who they are,” she continued. “I’m grateful it happened to me. And it helped me musically because then I wasn’t afraid to say what was on my mind and put my thoughts out there. It all kind of worked together in that respect.”

This is why she’s eager to get back into the studio to start making her new record next month, just 14 months after America’s Child.

“I’m really looking forward to that,” Copeland said. “Usually I’m not in a hurry to record, but I feel I have so much to say that I’m ready to get into the studio.”

She said it will be along the same lines as America’s Child, “but a little bit different. I’m always wanting to challenge myself.”

The opening act at Saturday’s show will be the Charleston, South Carolina-based Ranky Tanky performing jazz-influenced arrangements of music from the Gullah culture and African American spirituals such as “You Gotta Move,” which was covered by Sister Rosetta Tharpe, Rev. Gary Davis, Fred McDowell and popularized by The Rolling Stones.