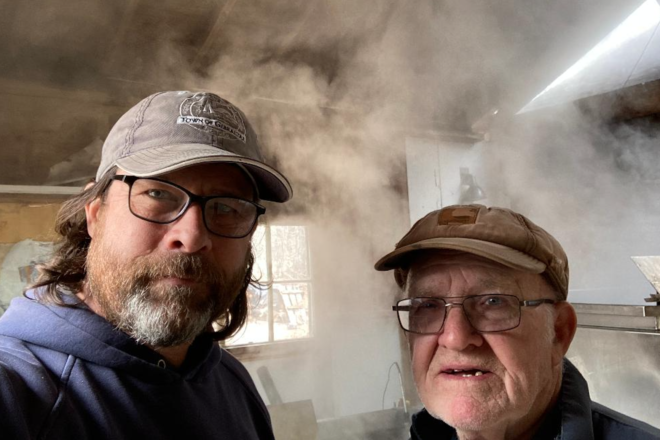 Louis Sohns, nearly 85, has been tapping trees since he was six years old

As farmers prepare their fields for a new season of growing, the harvest for another season has recently concluded: maple-syrup making.

Hard at the classic tree-tapping business this year, as he has been in one way or another for more than seven decades, was Louis Sohns. There are maple sugar producers with bigger operations in Door County, but hardly anyone who’s been in the business longer than Sohns, who will be 85 this year.

He was in first grade at Maple Grove School, just down the road from the farm where he was born and still lives, when he “went into business” with Walter and Bertha Reinhard.

“I’d come home from school, collect the buckets of sap from the trees I’d tapped, and put them in my little wagon,” Sohns said. “Before global warming, there was usually snow on the ground in March, so I’d replaced the wagon wheels with runners. I’d hitch up my dog, Muggins, and take off around the corner to Reinhards’.”

Walter Sohns, Louis’ dad, made syrup for their family, but the Reinhards (the parents of Jerry of Jerry’s Flowers) were tapping 3,000 trees. They became Sohns’ mentors, and they worked together for about 30 years, until he began boiling sap himself in 1972.

In the beginning, like everyone else in those days, the Reinhards collected the sap in buckets and bags hung on the maples they tapped. In the late 1950s, they were among the first in Door County to begin using tubing to transport sap to trash cans with liners in areas where there were many trees in one spot.

One thing that hasn’t changed is the way sap is produced. Nature still needs days of about 40 degrees and nights below freezing, ideally about 20 degrees, to coax the sap up from the roots of the trees during the day and allow it to retreat at night. Sohns thinks this up-and-down journey of the sap over the length of the “run” enhances the flavor.

“We’re totally dependent on the weather,” he said. “Traditionally, the run would start about March 20 and last a few weeks, but you never know.” In 1951, the Reinhards tapped 3,000 trees with buckets and had just one sap run before it got too warm. It was over before the end of March, and they ended up with just 37 gallons of syrup.

Sugar maple trees make sugar out of sunlight through photosynthesis: a process that allows trees and other plants to use sunlight to synthesize food from carbon dioxide and water. Trees with full tops that receive lots of sun make more sugar. Those in deep woods, where there’s not enough room to develop big tops, make less. A run may continue for a bit after buds form on the trees, but the sap’s flavor isn’t as good at that point.

“I’ve had syrup from all over the country,” he said, “and it doesn’t taste as good as here.”

Sohns had been making maple syrup with the Reinhards for nearly 18 years when he married Betty Franke in 1959. Their children, Steve and Evelyn, knew that winter was near an end when the sap began to flow. Their spouses, Sara Sohns and Charlie Eckhardt; and Steve and Sara’s daughter, Gwendolyn, 15, are now part of the family tradition, too.

Sohns treats his trees with respect, as did the Reinhards.

“A tree should not be tapped until it is 10 inches in diameter,” Sohns said. “When it’s 20 inches, it can handle two taps.”

Tapping the trees – inserting a plastic extension, attaching the tubing and getting the sap from the trees into the sugarhouse – is the more physically demanding part of the operation.

Until 2020, Sohns combined tubing, supported with high-tensile wire, with the old-fashioned use of bags and pails, but COVID-19 made it impossible to get enough help to monitor and empty them. This season is the second when the sap is being harvested solely with tubing.

Sohns’ 25 years as a welder in the shipyards were invaluable in “fin-gineering” much of the equipment he uses to get the sap into and out of the 325-gallon tank on the back of a small truck. Fin-gineering, Eckhardt explained, is a “Louisism” for putting things together from whatever he can find around the farm.

He also created the big boom that swings from side to side and the submersible pump (a modified sump pump) that suctions the sap from the barrels in the woods.

Back at the sugarhouse, sap is suctioned into tanks on the roof. The Reinhards boiled down their sap in a 5-foot by 16-foot flat-pan evaporator that burned 38 cords of wood a season. Sohns’ evaporator, a piece of machinery taller than he is, takes up most of the sugarhouse. The sap flows from the roof into the back pan of the condenser. There, as it boils down and gets thicker, it makes its way to the front pan.

On a recent Sunday afternoon, temperature 37 degrees, the sap had been gathered from about 600 taps on 400 trees, and Sohns and Eckhardt were tending its slow transition into syrup in the sugarhouse.

There is little time to sit around here. The firebox has to be fed with wood every 30 minutes.

“At peak heat,” Eckhardt said, “the fire is about 10 degrees cooler than the fires of hell.”

The sap becomes syrup at exactly 219.5 degrees. However, because it will be heated again before it’s bottled, the men are waiting for the syrup to reach just 218.5 degrees before drawing it off.

That’s the point when the syrup approaches a Baumé-scale density of 30 on a specific gravity hydrometer that looks a lot like an upscale candy thermometer. Eckhardt also checks its readiness with a “drip test” – just like Grandma let syrup “spin a thread” from a spoon when she was making divinity candy.

As each batch was drawn off, Eckhardt collected and numbered a small sample, comparing clarity and color. In an hour, the evaporator turned 35 gallons of sap into about nine-tenths of a gallon of syrup.

Walter and Bertha Reinhard began making maple syrup during the Great Depression. Nearly a hundred years later, Sohns is still doing what he learned from them as a boy. His mentors have been gone for years, but they’re not far from his thoughts.

One of the most prized pieces of equipment in his sugarhouse is a bench Bertha made. Occasionally he still uses it as she did, for making hot tea that’s sweetened, not with maple syrup (that’s for pancakes and oatmeal), but with maple sap.