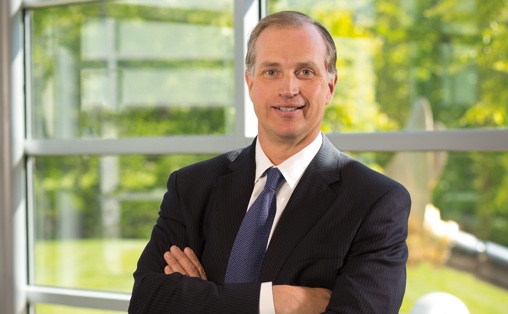 Mark W. Barker and some of his family members dedicated their lives to the maritime business, and he hopes that the new ship bearing his name, built in Sturgeon Bay, will sail the Great Lakes for years after he’s gone.

“My father, when we were designing and contracting to build the ship, decided he wanted to name it after me, and I didn’t tell him no,” he said.

Barker, president of Interlake Steamship Company, was pleased to see the 639-foot-long motor vessel pull out of the Fincantieri Bay Shipbuilding yard and navigate the waters of Sturgeon Bay for preliminary testing just before the Independence Day weekend. He said he’s still not sure when the ship will complete testing and depart for its home port of Cleveland.

Many Door County visitors and residents saw the Mark W. Barker go through the ship canal during its initial underway tests, but they might have missed the dramatic, James Bond–like splashdown of the vessel’s self-launching lifeboat.

“It’s kind of wild,” Barker said of the orange lifeboat that’s perched diagonally above the stern, not far from the living quarters and bridge. “You get in them and strap in. You push a button; it releases and slides down a slide into the water.”

That lifeboat capable of free-falling into the water stands out as the most visible safety measure on the newest freight carrier on the Great Lakes, but it’s by no means the most important feature on the vessel. Interlake Steamship Company designed the ship not only for versatility to accommodate customers throughout the Great Lakes, but more specifically for a customer on the narrow Cuyahoga River.

“We had a customer come to us and wanted us to carry some cargo for them. It was unique. It had to fit in a certain dock location and size,” Barker said. “For us to do it appropriately for our customer, a new ship was deemed necessary. On top of that, we built a ship that really could service all of our customers well, with options like a forward boom and a modern, efficient design.”

Barker said it’s tough – or impossible – to back into certain docks, with the stern of the ship usually heavier and floating deeper in the water than the front. With a forward boom, the crew should be able to move the ship closer to certain docks as cargo is unloaded from the front of the ship and the bow floats higher.

Interlake Steamship did not build a ship nearly as long as the thousand-footers that ply the open waters of the Great Lakes. This new River Class vessel had to be short enough to fit the Cuyahoga when jobs require it to leave the lake and enter the river.

“We’ve also incorporated better water-flow capabilities through the propeller and optimized the hull design for efficiency,” Barker said. “It has a square cargo hold without slopes. Our traditional self-unloaders have slopes to gravity-feed to the conveyor system. This boat will actually be able to carry more cubic capacity, but we will have to use front loaders to move some of the cargo to the conveyor system. That’s unique for us. There are some over on the Canadian side that use a similar technique.”

In addition to meeting all new safety requirements, Interlake Steamship kept its 17- to 18-member crew in mind.

“It has to work delivering cargo, but we have to ensure that the people are comfortable and have a good place to live. In the old days, comfort wasn’t taken into account as much,” Barker said.

That means better insulation and noise-limiting features for those trying to rest or sleep.

“Everyone will have their own stateroom with their own bathrooms, which is not uncommon on our ships today,” he said. “We’ve tried to update and make the amenities friendly. We’ve put male and female changing rooms on the boat to accommodate the diverse workforce.”

Barker’s family has a lengthy Great Lakes maritime history. Barker said his father’s uncle was the captain of a supply boat in Sault Ste. Marie, Michigan, and “my dad’s grandfather was actually the butcher on the supply boat.”

James Barker had been involved with the company since the 1970s, so Mark Barker grew up around the business his entire life. He attended State University of New York Maritime College, became a third engineer, sailed for a little while, then came ashore and worked in the company as a sea engineer: someone who works on the maintenance of the ships from a shore-staff position. Barker returned to the business side after attending business school in 2000.

James Barker’s pathway to leading Interlake Steamship included time in the Coast Guard and at Harvard Business School, after which he founded a consulting company and then worked for and bought another company that managed Interlake. During the 1970s and ’80s, James Barker was associated with Moore-McCormack, which eventually sold the shipping-business asset to him.

Mark Barker said he’s glad to be associated with the first large bulk freighter constructed in the United States for use on the Great Lakes since 1983. Canadian companies built a few between the 1980s and today.

“We operate in the U.S. domestic fleet, which comes under the Jones Act, which means we need to be U.S. built, U.S. owned and U.S. crewed,” Barker said. “I think it’s important for our county, our nation and our national security that we have U.S. shipbuilding capability. The craftsmen at the shipyard do wonderful work not only with this ship, but many others, and repairing our fleet throughout the wintertime when our ships lay up.”

Beyond being pleased with the vessel and the work at the Sturgeon Bay yard, Barker said it’s an important industry for the country.

“Without shipbuilding capability, we not only can’t build merchant ships, [but] we can’t build Navy ships,” he said. “It’s an important thing we need to keep alive and on the forefront.”