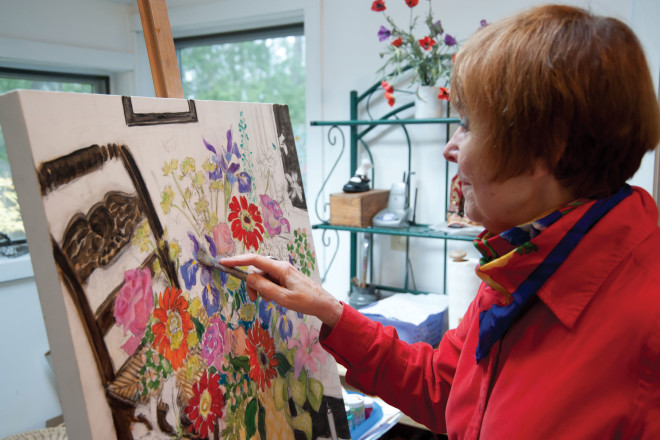 Picture a red-haired pixie, paintbrush in hand, standing before an easel in the wee hours of the morning. If you’re a member of Door County’s vast community of artists – or one of the multitude who appreciate the work they produce – you’ll have instantly recognized the description of Franne Dickinson. 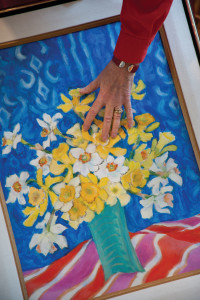 What you may not know – and find hard to imagine, given the immense popularity of her paintings – is that art was not the first passion of Door County’s Master Artist of 2006. Franne began dance lessons at age four and danced her way through high school and college. She loved music and majored in literature at the University of Illinois, where she met Duane, her husband. As a wife and mother in Elm Grove, she served for years on the boards of ARTreach Milwaukee, the Milwaukee Art Museum’s Friends of Art and the Milwaukee Repertory Theater’s Laura Sherry League (which became the Friends of The Rep), and spent 13 years with the Brookfield Players as an actress, writer, director and set designer.

Although as a child, she’d taken a few art classes at the Art Institute of Chicago and spent time with her mother in Impressionist galleries, she’d only “dabbled” on her own. She was motivated in classes at the Peninsula School of Art taught by Emmett Johns, who became her mentor, and has also studied at the Milwaukee Art Museum and in Mexico. In 1979, the Dickinsons bought their home on Anderson Lane in Ephraim. By the time they lived there full time 10 years later, Franne’s charming little Toe Path Gallery & Studio was well established.

Franne, whose paintings are classified as Post-Impressionist, works primarily in pastels, acrylics and oils. She is on the faculty at the Peninsula School of Art but says that it’s difficult to tell anyone how to paint because she uses color intuitively, without relying on rules and theories. She loves strong colors, and they are everywhere in her home, not only in paintings, but also in her bright yellow footed bathtub and her shocking pink bedroom. 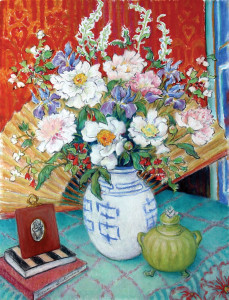 Her work often includes a minor element in a “foil” color, without which the painting would be entirely different. “This is a fun game to play in a museum,” she says. “Hold your thumb in front of your eye to block out one color in a painting and see how it changes.”

A visitor to her gallery once commented that a footed jug in the corner of a painting appeared to be dancing. “She ‘heard’ the Mozart,” Franne laughs. “I always paint to Mozart or Charles Trenet, a French cabaret singer I met long ago.” Her paintings are described as rhythmic, obvious in the graceful ballets of blossoms for which she is well known.

Although Franne has received many awards, has exhibited in galleries throughout the county and has paintings in private and corporate collections across the country and in Europe, it is the work of her granddaughter, Jennifer Lee, that she points out first in the gallery they share. Like her grandmother, Jennifer began to paint as an adult.

“She was always trying to put me in front of an easel when I was little,” Jennifer says. “And,” her grandmother adds, “she didn’t even pick up a crayon.”

“But she took me to galleries and museums – even to Paris,” Jennifer continues, “and I absorbed so much. When I did start painting, it was a surprise to both of us.” That epiphany came as Jennifer was talking on the phone with her mother, Jane Lee – a casual artist and sculptor – and playing with orange and pink bingo daubers in a notebook. “When I was finished,” Jennifer says, “there was this really awesome fat, naked woman. I went right out and bought watercolors.”

Her growing interest in art prompted a move in 2000 from Maine to Door County, where Franne and 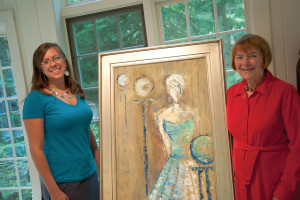 her circle of artist friends have been very supportive of Jennifer’s escalating career. In 2006, she was named an Emerging Artist by the Peninsula Art School (now called the Peninsula School of Art), an honor culminating in a successful show of her work.

With Jane’s assistance, Jennifer manages the Brew Coffeehouse in Ellison Bay. She completes perhaps 20 or 30 paintings a year and would someday like to own a gallery to promote the work of other young artists.

Although Jennifer’s contemporary style is very different from Franne’s, both often paint women. Jennifer’s figures have a playful attitude; Franne’s tend to be more serious, although she has done a series of 1920s flappers, one of which will be donated to American Folklore Theatre for an auction this fall. She has also painted mail-order brides, facing an unknown life.

And, since 2006, much of her interest has centered on a group of five African women, standing in line at a refugee camp in Darfur. Their picture in USA Today tugged at Franne’s heart. “I felt an immediate connection to them,” she says. “Sympathetic as I was to their vulnerability, I figuratively took my place in line with them, not as victims, but as ‘women,’ each one reacting in her own way – accepting, resilient, listening, wary and nurturing.” 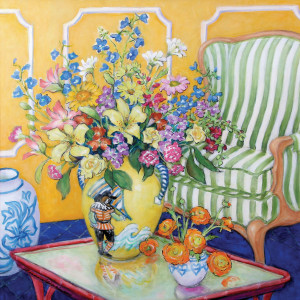 Over the next five days, Franne did a 15- inch by 44-inch charcoal sketch of each of the women. “It was a spontaneous reaction,” she says. “Afterward, I could hardly remember doing the drawings.” Later, she did full-color versions in pastels.

She hopes someday to be able to help women like them, as she did victims of Hurricane Katrina in 2005. Troubled and wondering how she could make a difference, she thought of all the posters that had been made of her paintings. She and Duane spent two weekends parked beside Highway 42 in Ephraim in their little red convertible, with a handmade sign offering a poster to anyone who would donate $100 to the relief effort. They raised $6,000!

Franne’s home has a shocking number of unfinished paintings, and she’s writing a book about her work that she says should be called Promises, Promises. But when it comes to recognizing a need and meeting it, her determination and energy are as boundless as her artistic talent.