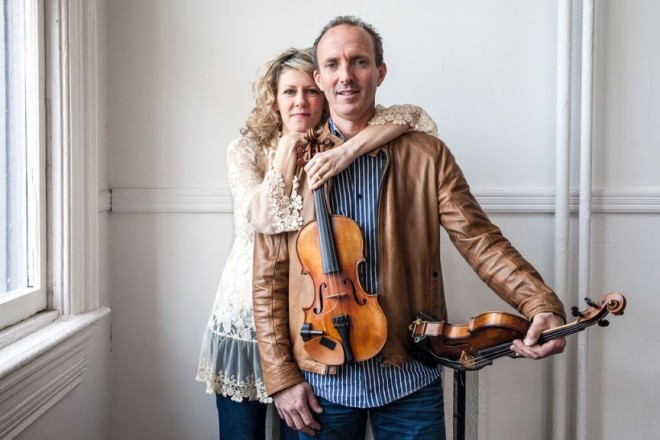 Several years ago I heard Natalie MacMaster play her fiddle at the Door Community Auditorium (DCA), performing in a style that combines French, Celtic, bluegrass and Cajun music. She spoke to the audience about her childhood in Nova Scotia’s Cape Breton, and the ceilidhs (KAY-lees) her family enjoyed, Gaelic social gatherings featuring fiddle music and step dancing. That is a place I want to visit one day, I thought as I left the auditorium, and this past September my wife and I did, flying into Halifax, renting a car, driving through Cape Breton, and attending ceilidhs. The trip was wonderful!

This Valentine’s Day fans of fiddle music will have the opportunity not only to enjoy MacMaster’s mastery of her instrument, but that of her husband Donnell Leahy, an equally talented musician – and without the expense and hassle of airfare to Canada.

MacMaster and Leahy perform together with two pianists, Mac Morin and Erin Leahy in the group Masters of the Fiddle. Some readers may recall their last concert at the DCA in November of 2013. And the pair also plays with his family band that includes two brothers Doug and Angus, performing under the name Leahy. They appeared at the DCA in July of 2012.

“Where’s that?” people back home ask, when she mentions that she’ll be performing in Fish Creek. MacMaster laughed. “It’s a great little spot,” she tells them.

Speaking of the combined careers of her husband and herself, she said, “It’s always a treat for the two of us to share our passion in life, which is music, and go out on tour together.

“This is very much a family affair,” she continued.

Both young Natalie and Donnell were brought up in musical families, she with an uncle and two cousins who were fiddlers, and he with a fiddler father and a family with a 100-year history of fiddling. She began playing at 9 and produced her first album at 16; he, raised in a family of 11 children, began fiddling at age 3.

Now, after each has been performing for three decades, they are providing their kids with the same tradition. “They all play fiddle, dance, and play piano,” MacMaster said, and many times the youngsters accompany their parents on tours. “We’ve done 60 shows with our kids,” she said, but added that because the present tour was long, the children would not join them when they perform at Fish Creek.

Although some people might think running a farm, raising a family of six children, and touring as professional musicians might be activities at odds with each other, MacMaster finds them perfectly compatible. “We feel how important it is, as so many of these elements of life are particular to kids.” Not only do they live close to nature on the farm, but “have natural musical talent and they participate with us.”

MacMaster and Leahy have individually and together produced many albums, received numerous commendations – she, for example, has several Artist of the Year awards – and have performed with major artists – she recorded with Yo-Yo Ma. But because their music is grounded in a long folk tradition, their performances have an air of authenticity. Audiences may not only find themselves enjoying the music, but also experiencing a culture that has a long, rich history of neighborhood ceilidhs.

The Door Peninsula is a good setting for Masters of the Fiddle, as on my trip to Nova Scotia I noted similarities between the two areas, a comparable climate, endless miles of coastline, natural wooded landscape, and an appreciation for live music.

Masters of the Fiddle, featuring Natalie MacMaster and Donnell Leahy, will perform at the Door Community Auditorium on Feb. 14 at 8 pm. To learn more about the couple and their music, visit nataliemacmaster.com and donnellleahy.com. For tickets and information about the concert, call 920.868.2728 or visit dcauditorium.org.