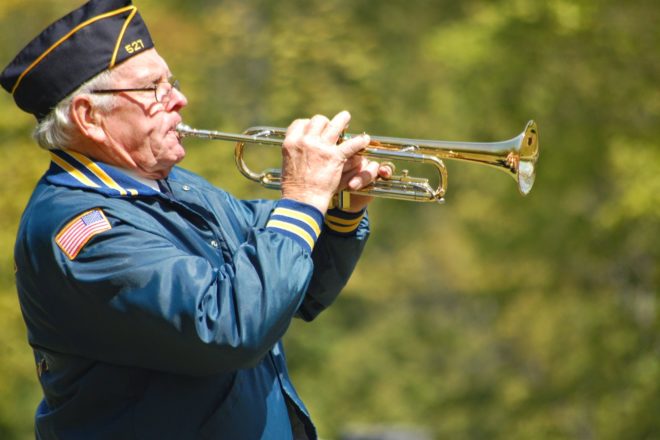 Ceremonies will begin on Monday, May 27, 8:30 am, at Bayside Cemetery with VFW Post 3088, which will also provide the flag. They will continue at 9 am at St. Joseph’s Cemetery with American Legion Post 72, then at 9:30 am at the Dorchester with AMVETS Post 51.

The city ceremony will begin at 10 am in the Sturgeon Bay Fire Department bays at City Hall. American Legion Post 72 will provide the rifle squad; the Peninsula Symphonic Band will play patriotic music; Pastor Sauer will serve as chaplain; and Congressman Mike Gallagher will be the speaker.

Andy Anderson and Mary Nickel will sound echo taps at all locations. The Sturgeon Bay Fire Department will provide the bell, and the Civil Air Patrol will toll it. Marine Corps League DET 1130 will host the post-ceremony reception inside the fire department bays. Sturgeon Bay Public Access (Jason and Morgan Mann) will tape the ceremony. At noon, flags will be raised to full staff/mast.

George W. Goetz Post 372 of Forestville will conduct services at all 22 Southern Door cemeteries on Sunday, May 26. Clergy at each location will offer a prayer; a rifle salute will follow; then two Southern Door students will play echo taps. The post will also honor members who have died during the last 10 years by placing a flag and wreath.

Immediately after the last cemetery, on the lawn by the Forestville Town Hall, a rifle will be stuck in the ground and a military helmet placed on its stock. The names of the deceased will be read; a chaplain will offer a prayer; and the ceremony will end with a rifle salute and echo taps.

The Billy Weiss Post 527 of the American Legion, along with VFW Post 8337, will hold services at Little Sister Cemetery on Monday, May 27, 10:30 am. The Gibraltar Band will play patriotic songs before ceremony.

At 10:30 am, veterans will present the colors at the Eldred & Mildred Koepsel Memorial Flag Pole, followed by the national anthem. Veterans will march to the assembly area and post flags, followed by VFW Post 8337 of Ellison Bay placing a ceremonial rifle and helmet. First Vice CDR Tom Kowalski of American Legion Billy Weiss Post 527 will provide the welcome; Joy Zakrzewski, chaplain of Good Samaritan Society, Scandia

Village of Sister Bay, will deliver the invocation; Stella Kersebet will lead the Pledge of Allegiance; and Dale Seaquist will lead the choir in singing patriotic songs.

The guest speaker will be Lieutenant Commander Andrew Murphy of USCG Marine Safety Detachment of Sturgeon Bay. Veteran Charles Eckhardt will lead the Gibraltar School band in a salute to our armed forces. Don Sitte, Americanism chair of American Legion Post 527, will read the names of Northern Door veterans who have died within the last year, followed by a benediction by Chaplain Joy Zakrzewski.

Veterans will then prepare for closing ceremonies; Dale Seaquist will play “Taps” for his 73rd consecutive year; Charles Eckardt will sound echo taps; and Regina McIntosh will lead in the singing of “God Bless America.”

Please take your own lawn chairs.