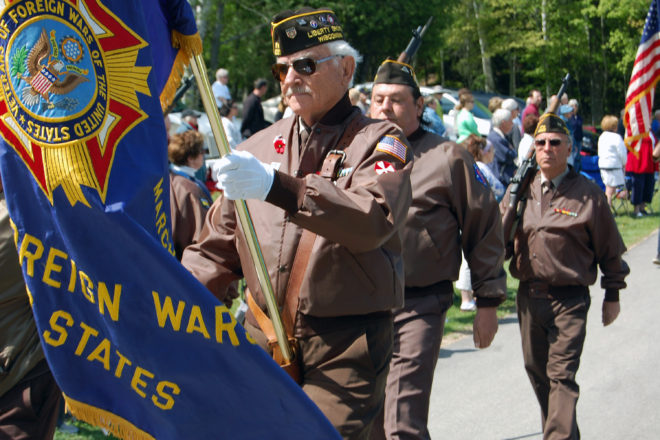 The spirit of Memorial Day weekend can often get lost in the three-day weekend; it’s a time for putting the boat in for the season, the beginning of summer in Door County.

Its spirit resides in the sacrifice and burden that a few share to protect the many. More than 42 million Americans have served their country during wartime and 1.3 million didn’t make it back home.

For those that do, local governments and grassroots organizations provide ways for veterans to get together, share experiences and maintain normalcy in their lives after service.

Scott McFarlane is head of the county’s Veterans Services department and his staff has kept busy keeping up with changes in veterans’ services. No two wars are the same and it has created an environment of many different veterans with many different needs.

“The challenge with those posts with the declining membership is that after WWII with all the veterans coming back there was a huge influx of members that joined those groups,” said McFarlane. “That was the thing to do.

“Most of it’s stayed the same as far as delivery of the benefits,” said McFarlane. “The key thing that has changed is the Vietnam veterans are getting older.”

Veterans services have gone through many different iterations as the country is involved in different wars and the veteran population ages. Most veterans organizations are made up of retired men and some of them are not experiencing post-war challenges until decades after their service.

McFarlane said the number of veterans his office is involved with has decreased, but their conditions are getting continually worse as the population lives longer.

“The Vietnam veterans are getting Agent Orange conditions but also reaching retirement age and having more issues with mental health conditions,” said McFarlane. He credits some of the mental health conditions to the competitive work environment when veterans return to the more traditional workforce. Keeping busy keeps their minds off of their traumatic experiences in war, but with consistent jobs more difficult to come by, their mental health problems can be exacerbated.

McFarlane expects these mental health conditions to increase with the younger generation of veterans who don’t receive as much support when they are welcomed home.

“[WWII veterans] went as a group, they came back as a group, they were welcomed home with parades,” said McFarlane. “The Vietnam veterans, some had some welcome, some were spit on. Some of the recent young veterans they keep deploying… in multiple deployments, we’re going to see a lot of mental issues down the road.”

The few holidays throughout the year for honoring and remembering active military members and veterans, including Memorial Day, are some of the only times a veteran truly sees nationwide support of his or her entire community.

Veterans groups, including the American Legion, Veterans of Foreign Wars (VFW), American Veterans and the Marine Corps League have had a harder time recruiting and retaining membership. McFarlane credits this disconnect with large generation gaps of veterans who protected the nation from very different threats in a different day and age.

“The Vietnam veterans did not feel that they had the support of some of the bigger veteran organizations so they formed VVA (Vietnam Veterans of America), which is fairly large,” said McFarlane. “It can be frustrating for these younger veterans who go to the meeting and then they realize how big the generation gap is of most of the guys and gals that are sitting in that room.”

While the Veterans Services office recognizes nine veterans organizations throughout Door County, there are some groups that have formed to support soldiers currently in the service.

“I wanted Matt to know that we appreciated what he was doing,” said Hutchinson. “I went to Sevastopol to see if they wanted to take up a collection of items. When they did that we were able to send 40 boxes on the very first try.”

From there, Hutchinson and a collection of volunteers have sent more than 4,000 boxes to 188 Door and Kewaunee County servicemen and women. Recently, the nonprofit has supported local Coast Guard members with household items and basic accessories for living in a new post.

The group collects goods year round and sends eight boxes throughout the year, usually with a theme such as Movie Night or S’mores.

Community efforts such as Adopt a Soldier paired with support from veterans organizations help create an environment in which veterans are welcomed home and supported throughout the year, not just during a three-day weekend.