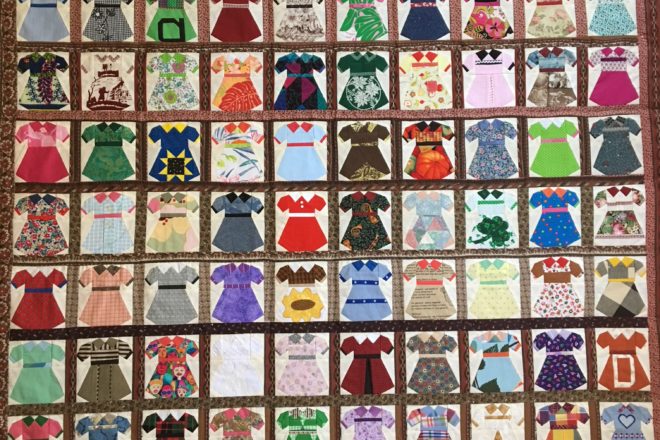 Family histories are often found in the pages of old photo albums, passed down at family functions or in the cotton swab of a genealogical DNA test. Chicagoan Deb Lindahl, on the other hand, decided to capture her family history in a quilt, and she’s showing it at Ephraim Moravian Church with her program called “100 Dresses, 100 Memories.”

Lindahl’s grandmother, Mabel Olivia Wann Nelson led a difficult life, so she was inspired to share stories from not only her grandmother’s life, but also from her own mother, mother-in-law and children’s lives. She took their clothing, with certain memories attached to them, sewed them into the shapes of dresses and then sewed them into squares for a quilt — 100 of them.

It doesn’t end there. She wrote 100 essays to go with each square. These essays share the stories behind each of the dresses, some of which are representational. For example, Lindahl had the recipe to her grandmother’s Swedish pancakes with lingonberry jam, so one of the dresses is the same color as a lingonberry, though the fabric itself wasn’t worn by anyone. There’s also a square that has the words, “word geek” to represent Lindahl’s love of words and Scrabble. Similarly, the Lindahls lost a child at birth, so one of the dresses is representational of that. These stories are both happy life stories and ones of loss, she said.

“A lot of those squares remind me of being in the moment and freezing time,” Lindahl said. “It evokes so many memories.”

Where did the motivation to make this quilt come from? That’s a question Lindahl has trouble answering herself. She grew up with her mother and grandmother sewing, so she thought that it was a way of life. She’s been quilting all through married life.

Lindahl was also a teacher and children’s librarian, so she’s always enjoyed books and reading. Perhaps part of the inspiration for this project came from one of her favorite books as a child, The Hundred Dresses by Eleanor Estes. The book is about poor immigrants coming to America, and the main character gets teased for wearing the same dress to school all the time. She tells them she has 100 dresses in her closet, and draws 100 pictures of them to prove it. 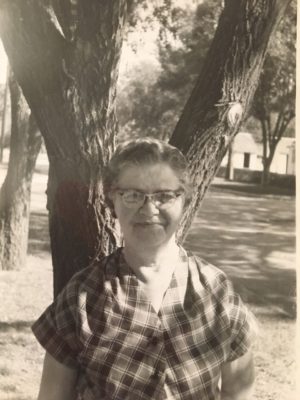 Nelson was an immigrant from Sweden. Her family settled in Marquette, Kansas, she being the eldest daughter of nine children. At eighth grade Nelson quit school to help take care of the younger children. After she married, she had seven children of her own: six boys and one girl. Their only daughter died at age 14 of rheumatic fever. The husband died too, leaving her a single mother of six boys. Later on, five of them would enter the service, three of which were on active duty.

In the end, they all came home, and Nelson depended on them and others throughout her life. This story was first handed down to Lindahl’s uncle, who interviewed Nelson for her story.

The ultimate motivator, though, is preserving her family’s history. It’s twofold, she said — sharing her family stories with her own family and her grandchildren, and to encourage others to do the same with their own histories while they can.

This whole experience of presenting her story to others has been something she didn’t expect. People have come up to her after her program and shared that her stories brought up memories of their own. She encourages people to preserve their history in a way that means something to them.

“Even through our lives may not be in the public, we all have a way of making a ripple effect by sharing our story,” Lindahl said. “It’s the human condition to share a story.”