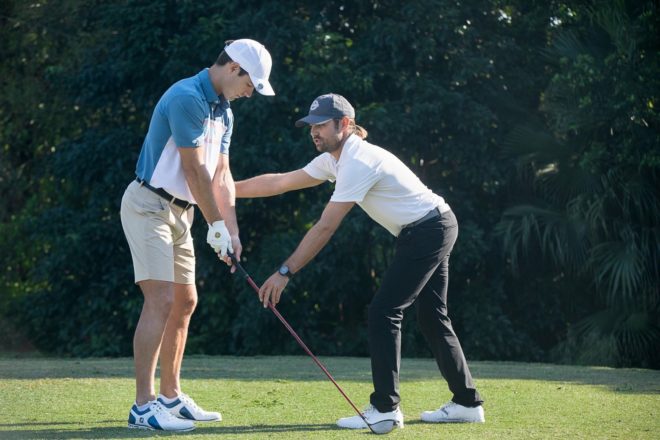 When’s the best time for a golf lesson: the beginning of the season? Indoors with a simulator during the winter or early spring? Or is it better to take a lesson in the middle of the summer, when you’ve had some encouraging days but have occasionally fallen back into bad habits?

Horseshoe Bay head golf professional Jamie Christianson sees golfers of all abilities and ages, and he said any of them could benefit from lessons at just about any time of the year. He said that if a player is scoring well and preparing for a big event, he and the four other Horseshoe instructors wouldn’t encourage any big changes that might harm a player’s confidence. Instead, they might provide subtle guidance to help a player build on what he or she is already doing well.

But when asked whether players should take lessons early or late in the season, or during the summer when they’re swinging well and in some sort of mid-season form, Christianson had this to say:

“I don’t believe people take enough lessons in the beginning, middle or end [of the season]. I think it’s a continuous process. If you want to truly better yourself, there’s a certain work ethic and understanding of what that process is. Even the best players in the world get a weekly checkup, if not more. It doesn’t take a lot for it to go off-kilter.”

Also, golfers can create new flaws or new bad habits if they change something in their swing, and they may need a PGA pro to help them correct the problem. Christianson considers each player’s swing to be a “living, breathing thing,” and it may need alterations to help the golfer swing safely and well for years to come. He encourages longtime players to take a lesson – or several – at various stages and ages.

“As we get older – and it depends upon how physically active the golfers are – because as we get older, our muscles get a little bit shorter. The flexibility we once had tends to go away, which will eventually hurt the golf swing altogether,” Christianson said. “It’s important to have somebody to take a look at your golf swing.”

He said golfers don’t necessarily need the step-through finish or the incredible, lifelong work ethic and exercise regimen of Gary Player if they want to keep swinging a club fairly well as they age. However, he knows all players could benefit from emulating a bit of Player’s routine.

“I actually had the privilege of speaking with Gary Player when I was in Florida,” Christianson said. “He does an hour of yoga each morning. During our conversation, he got on the ground and started doing sit-ups. He got back up and said, ‘I’ve got to do a thousand every day.’ He’s in the weight room every day for at least an hour, if not more.”

Player also is very conscious of what he eats and drinks, and he swings a weighted club every day and has one of the strongest handshakes Christianson can remember.

Christianson said golfers of all ages can benefit from yoga or Pilates because they improve flexibility by stretching the back and the rest of the muscles. This flexibility can not only lengthen a golf swing, but it can also lengthen the number of years a golfer can enjoy the game.

In addition to yoga and Pilates, swimming is a fantastic way for golfers to stay fit and actually improve their power and flexibility, said Steven Cox, a 2005 Gibraltar High School graduate who’s now a golf instructor at PGA National in Palm Beach Gardens, Florida.

“I personally tell all my golfers to get themselves into the pool,” Cox said. “If you can do frog kicks and free swim for 20 minutes a day, you will open up your hips, and you will take all of that stress off of your lumbar and lower back. I would say 99.9% of golfers have chronic hip tightness. They cannot internally or externally rotate their hips as we all wish we would.”

Christianson also encourages young, limber golfers and new players to schedule a lesson if they have a desire to improve and advance at least a little bit from the “hit and giggle” stage of golf.

Though they work 1,500 miles apart, Christianson and Cox see a lot of the same kinds of players – those who can play all year because they live in the South during the winter and in the North during the summer.

Growing up in Ephraim, he learned that most Door County residents are too busy working in the spring, summer and fall to dedicate the time they need to improve greatly at golf.

Both Cox and Christianson said that for players who are trying to improve, a lesson while they’re playing well during the middle of the season can help.

Also, at the end of the season, a teaching professional can “give you a plan for the off-season if you ask them,” Cox said. “They’ll give you whatever the necessary regimen is to feed that need. I have a good friend who I played high school golf with who went to Gibraltar. He does that. He goes in in the fall and sees one of my tour-coach friends out of Chicago who gives him a plan and says, ‘This is what you’ve got to do.’”