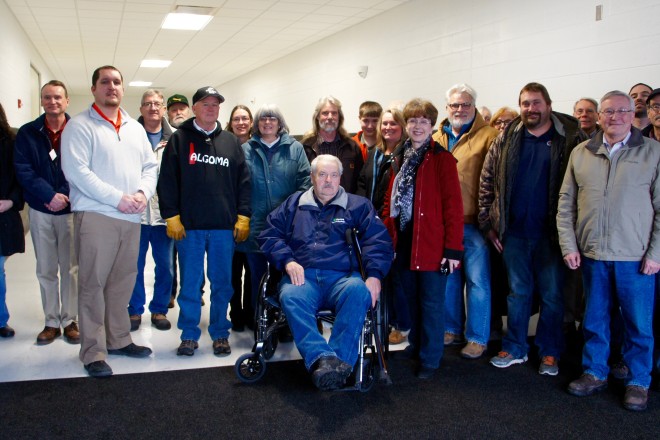 The group that showed up for the unveiling of the water delivery unit at Algoma High School on Jan. 14. The water filtration system was donated by Stonehouse Water Technologies of Milwaukee. Photo by Susan Connor.

When the folks at Stonehouse Water Technologies of Milwaukee were contacted about helping with Kewaunee County’s water issues, they had no idea that conditions were worse there than some of the Third World countries the company has worked with.

Charles Bensinger, director of water analytics at Stonehouse, said in Third World countries they usually are dealing with a single contaminant to a water supply, such as arsenic, bacteria or parasites, whereas Kewaunee County water has multiple problems, including nitrates, coliform, hormones and pharmaceuticals. 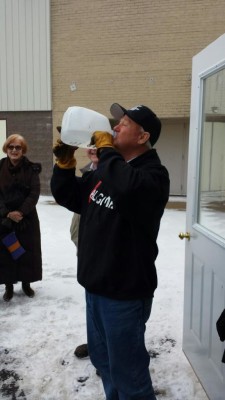 An Algoma resident takes a big swig of fresh, clean water from the filtration system. Photo by Stonehouse Water Technologies.

“I think they’re at the epicenter of what’s happening in our country,” said Stonehouse President Hensley Foster. “Where we came from is looking at the Third World and trying to have a system that is simple, low-energy and easy to maintain so that from a long distance we can have a sustainable way to maintain it. Quite surprising to us, when we look at the situation up in Kewaunee County, a lot of our thinking fits with it.”

He added that while the company is deeply involved in water issues, “We had no clue about the problems in Kewaunee County.”

The company learned about the contaminated water issues in Kewaunee County through the Joseph J. Zilber School of Public Health in Milwaukee.

“People aren’t aware of issues that are happening in our own state,” said Anne Wick, director of communications for Stonehouse Water Technologies.

On Jan. 14, Stonehouse unveiled to the community its donated Water POD Water Filtration System that was installed at Algoma High School.

The Stonehouse system eliminates polluting chemicals and organic contaminants while enhancing the taste of the water and retaining trace minerals. It uses an energy-efficient system to purify the water without chemicals and can be monitored remotely by Stonehouse.

“We are really focused on drinking water and providing the best and healthiest water that we can,” Foster said. “We will be looking at every technology that comes along, but we have a really good system that can do some pretty amazing things.”

Algoma School District Superintendent Nick Cochart, who also serves on the Kewaunee County groundwater task force, worked with Stonehouse to locate the water-dispensing unit at the school. The school built a “warming hut” to house the water dispenser so it is available 24/7. Foster pointed out that the water is not just for those who have been identified with contaminated wells, but anyone within the contamination zone.

“We’re saying those people should be allowed to get water for free,” he said.

He said there is a cost to maintain the pod, but a very small cost compared to other water sources available to Kewaunee County residents, such as bottled water.

“We believe it can be funded through some sort of subsidy through state government, but right now it’s funded by citizens,” Foster said. “It’s a complex issue because, quite frankly, the state doesn’t want to open Pandora’s box.”

“The grassroots efforts of the citizens of Kewaunee County, Algoma School District and Stonehouse Water Technology have successfully brought clean, safe water to those living with contamination, in spite of the failures of the agencies designed to protect us, which include our local government, state and local health departments, the DNR, and EPA,” said Kewaunee County farmer and clean water activist Lynn Utesch.