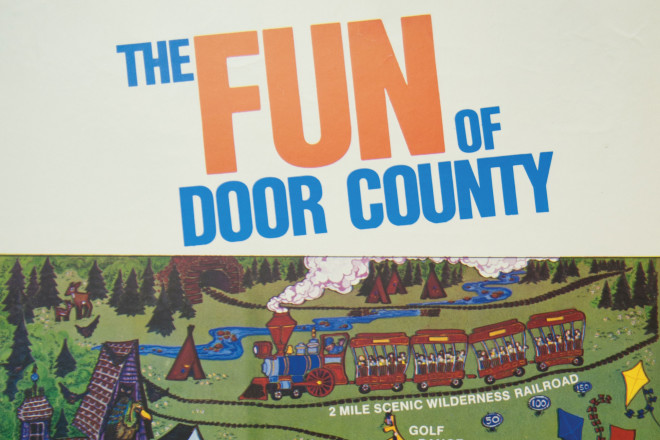 When former restaurateur and now visitor center extraordinaire Digger DeGroot says “Thumb Fun was really good for business in Northern Door,” his sentiment extends beyond the crowds it used to attract.

For the latest issue of Door County Living magazine, I took a look back on the iconic Fish Creek amusement park with its founder, Doug Butchart. In five hours over breakfast, in his living room, and digging through Thumb Fun remnants in his garage, I learned that there was much more to the Thumb Fun story than rides, frights, and water slides. 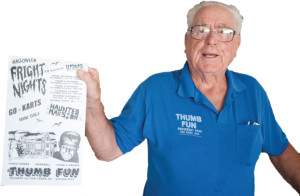 Doug Butchart, the man behind Thumb Fun for 40 years. Photo by Dan Eggert.

At its peak, the park employed 106 people, mostly seasonal workers plucked from the high school or college ranks. By the 1980s, Butchart needed to build a dorm to house his staff, providing seasonal housing for 16 workers, plus a few more that lived in apartments on his own property. What is often overlooked about the places that provided housing in Door County is that they often provided double the bang for the buck.

Most of those workers took on part-time second jobs, and some carried two full-time gigs for the summer. Employers at that second job essentially got the free benefit of Butchart’s housing, just as so many today benefit from the housing provided by Dave Ellmann at Camp David or the dorms at Landmark Resort.

That huge Thumb Fun staff spread their income around the peninsula, brought their friends up to Door County, and returned year after year long after their college days.

So when Thumb Fun closed, Northern Door lost more than the haunted house and a bunch of rides, it lost vital employee housing. When Hotel du Nord was replaced by condominiums a few years ago, we lost the seasonal housing that that hotel provided for 16 workers as well.

“There’s not much housing left,” says Bruce Alexander of Alexander’s restaurant in Fish Creek, which used to be located at Hotel du Nord. “We’re fortunate we’re a year ‘round business and have a lot of year ‘round employees that live here.”

When Tom Young built his restaurant, the Gibraltar Grill, he included units for a couple employees above the restaurant.

“It was the best money I ever spent,” he says. “I’d love to have twice as many as I have.”

DeGroot recalled his first days coming to Door County as a summer worker, before he opened his own hallmark restaurant, Digger’s Grill.

“There aren’t nearly as many places you can find today to rent as you could when I came up here in the ‘70s,” he says. “Back then you could show up for work in May and find a cheap place on the water! If we didn’t have employee housing at Peninsula Players we’d be dead.”

As time goes on it becomes more difficult for businesses to provide housing. Building regulations make them expensive to build, fire codes make it difficult to get the density needed to make them feasible, sprinkler requirements turn potential developers off, and that combines to drive up the cost to workers.

“I know summer workers paying $85 a week for a sleeping room,” Alexander says. “That’s nuts for a seasonal employee.”

Nobody wants seasonal housing near them, afraid of noise and impact on property values. Our zoning codes prevent density, and many of our once-young residents are now want a police officer stationed wherever more than a handful of youth gather on the peninsula.

As we age, we plot against much of the fun we had in our early Door County days, the things that helped get us here in the first place. And when we lose places like Thumb Fun, we don’t realize just how great a loss it is.