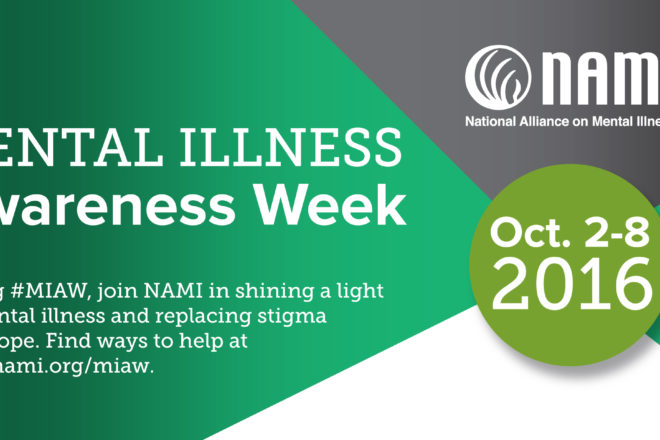 In recognition of Mental Illness Awareness Week, which takes place the first full week of October, we talk to a Sturgeon Bay man who has overcome his own demons and now helps others on the road to recovery at JAK’s Place.

Seth Wiederanders has come a long way since suffering his first psychotic breakdown in the early 1990s.

“If you’re going to look for a story of recovery, it’s not linear,” Wiederanders said. “It’s not one point to the next. It’s all over the place. I fortunately pulled it together the last 15 years, meaning no hospitalizations.”

Wiederanders has done more than pull himself together. He has opened up his own troubled past and recovery for the world to see as an example for others through two programs offered through the National Alliance for Mental Illness (NAMI).

“I was diagnosed at 19, 20. That was in the early ’90s,” Wiederanders said. “I was fortunate enough to have parents with health insurance. I got my initial psychiatric care from a doctor, not a jail doctor, so I was very fortunate. I went in to see the doctor because I started to hallucinate and was very paranoid.”

Wiederanders said he was barely hanging on through the rest of the 1990s.

“My résumé doesn’t even really start until 2006 because I was just doing cleaning jobs,” he said. “My ambition in my mid-20s vaporized. I tried going back to school but had medication issues. I got pretty far out there in 2000 and that ended up with hospitalization.”

Wiederanders was living in the Madison area at the time of his second hospitalization. After two moderately short hospital stays, he learned “pretty quickly that I don’t want to lose my freedom.”

“I was in Madison getting an SSDI [Social Security Disability Insurance] check and working part-time as a janitor. I didn’t have anyone I could even talk with, which was ridiculous,” he said. “I moved back here [to Sturgeon Bay] specifically in 2001 because I had people I could lean on, people I hadn’t leaned on in the past. The services in Madison were adequate, but I was pretty much stalled there. I wasn’t doing anything.”

It was a family tragedy that helped to bring meaning and direction to Wiederander’s life. After his younger brother, Jonah Andrew Klapatch, succumbed to the effects of mental illness in 2005, Jonah’s memorial fund was used to buy a home at 820 Egg Harbor Road in Sturgeon Bay and turn it into a drop-in center for those with mental health issues. JAK’s Place opened in September 2006 and was operated under the auspices of NAMI Door County. Wiederanders’ mother, Marlys Trunkhill, is president of the local NAMI branch, and his stepfather, Paul Klapatch, is secretary.

“This place is something Door County NAMI wanted for years and years,” Wiederanders said. “I was hired out of the gates. My people skills were nil. I wasn’t really comfortable with it at first, but I thought, I guess this is my new job.”

But he wanted to do more, so in 2010 he took NAMI’s Inner Voice training.

“That was really valuable,” he said. “It was training us to speak in front of people about issues that are not pleasant. That was a major, major eye opener.”

Wiederanders was in his late 30s when he took the training, and he was paired up with a man in his 70s.

“We had very different issues,” Wiederanders said. “I talked about my psychotic breaks and he talked about his depression and alcoholism.”

But they worked as a team and grew to be friends.

“We had some really well attended presentations,” he said. “That really helped me. We presented at churches, mental health focus groups. Our first one was a trial run for a NAMI group in this room full of NAMI people. The hardest part of that is you’ve got to go back to bad things. In your mind at least, you’ve got to go back and revisit all this bad stuff. You don’t want to think about it, but you’re telling a whole crowd of people. I used to tell people, if I can make it through that, it’s all gravy. Then you talk about your recovery and medications and meeting with counselors and friends and family and how right now I’m not in the hospital and this is why I’m never going back to the hospital. It was trial by fire. You’re putting yourself out there, but the idea you’re putting out to people is that you’re not the only one out there feeling like that.”

After proving himself in that arena, Wiederanders was encouraged last year by family, friends and colleagues to get his peer specialist certificate, another NAMI program that trains people who have had mental health issues to work with those going through the same things.

“That peer specialist training was very intensive,” he said. “It went well and I made some really good contacts and friends there.”

Now he has a list of clients that he meets with regularly.

“It’s all voluntary. Everyone I meet with comes because they want to. So it’s all up to me to keep them engaged and help them try to meet goals,” Wiederanders said. “That’s the whole idea of peer specialist training, we’ve all been through it. We graduated 13 people in that class and every one of us has been through mental health issues or AOD issues or more often than not, both. When you’re talking to me, you’re not talking to a doctor or even a counselor. No, I did the same thing.”

“It’s rewarding and sometimes frustrating, but it’s good work and I’m glad I took the time to do it,” he said. “My goal is to keep these guys out of the hospital. I sit down with a guy and make him go through everything in his past. After a couple hours of this, you say, let’s come up with a goal with all of this.”

One of the big problems is getting his clients to overcome the stigma of talking about their illness.

“You don’t identify yourself as the illness,” Wiederanders said. “I’m a person living this. I’m not a schizophrenic. I will share my diagnosis with clients or friends or people who come in here, and they will say, ‘You don’t seem like that, Seth.’”

He laughs and continues, “Good, good, because it’s taken me 15 years to get to the point where I don’t feel like that.”

“Now we’re in the process of reorganizing NAMI,” said Paul Klapatch. “We need to re-establish our grassroots in the community of Door County. There are families out there who could benefit from programs such as Family to Family or Peer to Peer. We have other programs, too, where people with mental illness get together and confide and learn from each other and how to manage.”

Anyone who would like to learn more about NAMI Door County can do so via email, [email protected] There will also be an organizational meeting at the Door County Library, Sturgeon Bay, at 6:30 pm on Oct. 18.