You can thank Patrick Surfus’ mother-in-law for getting him involved in brewing beer. She gave him a Mr. Beer Homebrew kit for Christmas 2004.

“It was awful,” he said. But it got him interested in the process and he continued to dabble with brewing, to the point where he is no longer dabbling, but is the proud owner of Door County’s newest brewery.

“A town should have certain things, its butcher, its baker, its candlestick maker, and its brewery. Sturgeon Bay is finally complete again,” said Starboard employee Steve Rice, who tends bar and assists in the brewing with owner Patrick Surfus.

Surfus, whose day job is as a production control manager at Bay Shipbuilding, said the idea for opening a nanobrewery has been on his mind for about two and a half years.

How does a nanobrewery differ from a microbrewery? It’s all a matter of scale. The U.S. Department of the Treasury, which regulates alcohol, defines a nanobrewery as a very small brewery operation that produces beer for sale.

In the case of Starboard, Surfus uses a one-barrel system (31 gallons), which results in three to four quarter-barrels of beer. 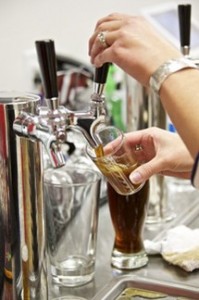 “The business plan was to do something small,” he said. “What really helped was when Ahnapee Brewery opened in Algoma (in July 2013). They were brewing on a small scale. That gave some meat to my business plan, that it is possible to brew on a real small scale and make a go of it.”

The tap room is comfortable but pretty bare bones. Surfus said his parents, Paul and JoAnne Surfus, were a great help with the brewery. Paul, a carpenter at Bay Shipbuilding, took time off work to help with the brewing, building the bar and getting the tap room ready for opening.

“Our focus was to get it open and get some good beers on tap,” Surfus said. “Our tap room is a little lackluster, for want of a better word, but we’ll work on giving it a more comfortable feel. I’ve been telling people, good décor is just a way to make up for a lousy bartender, and we have a good bartender who engages people in conversation.”

He refers to Rice, who is Surfus’ right-hand man.

“It really is comforting for me that we have someone who can handle racking the beer while I’m working at Bay Ship and I can trust that everything’s going to be done exactly right,” Surfus said.

In the short time Starboard has been open, Rice said he has already seen some major shifts in attitudes about craft beers.

“It’s hard to satisfy both the Miller Lite people and those who like extreme beers,” he said, yet he has been witnessing it happen.

“The enthusiasm for the British styles are amazing,” Rice said. “The wives say they don’t like beer, but they like the bitter. They’re terrified of the name, but once you explain to them that it’s not really bitter, they enjoy it.”

He said he’s even gotten some inexperienced beer drinkers to try the brown ale and the stout to help “take away the fear of color” in their beer. 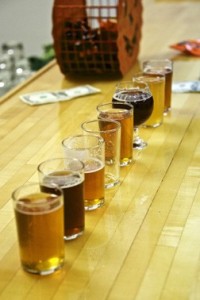 “It’s not supposed to be an extreme experience,” he said.

Although extreme beers are not out of the question. An Imperial IPA is already in the works.

Rice will also be brewing one beer a month. His first will be a smoked maple amber that is due out next month.

“It will be a good holiday beer,” Surfus said.

There is also a chalkboard for customers to suggest beers to be brewed.

“We’ll pick one request off the board a month and then we’ll erase the board and start over,” Surfus said. “The first request is going to be a cranberry wheat, so another nice holiday beer. We started the wheat beer on Sunday. After our primary fermentation, if our alcohol’s high enough, we’re going to rack it right on the cranberries.”

The brewery is open Thursday through Saturday. You can purchase cheese plates to have with your beer. Check Starboard’s Facebook page for more information.