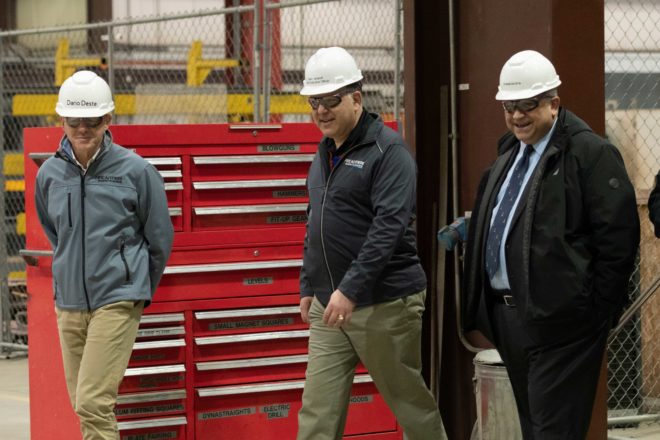 Fincantieri Marine group president and CEO Dario Deste (left) and Fincantieri Marinette Marine CEO Mark Vandroff (middle) walk through the Marinette Marine shipyard with Secretary of the Navy Carlos Del Toro on April 13. Del Toro did not visit the Sturgeon Bay site, but that shipyard will play a role in producing new naval vessels. Those who met with Del Toro said he showed an appreciation for the complex shipbuilding environment and its connection to national security, according to a press release.

Secretary of the Navy Carlos Del Toro toured the Fincantieri shipyard in Marinette recently to see where massive frigates will be built.

He did not travel to Sturgeon Bay’s Fincantieri Bay Shipbuilding site, about 24 miles away by boat, to see the improvements made to the south yard in preparation for the Navy contract, including the construction of an 84,000-square-foot, 110-foot-tall building, as well as a 68,000-square-foot addition to the existing building off the dead end of North 1st Avenue.

A spokesperson for Fincantieri noted, however, that the Door County site plays a huge role. Typically, skilled personnel in the local shipyard assemble 3,700-ton sections – or modules – and then load them onto barges destined for final assembly at Marinette.

Fincantieri had to construct a larger building to accommodate work on modules with a 7,400-ton displacement, the spokesperson said.

At the sprawling, revamped Marinette shipyard, workers are finishing serial production of the Freedom-class littoral combat ships (LCSs) and are about to begin construction of the Navy’s newest class of ships: Constellation-class frigates. These frigates will be larger and more capable than the LCSs, which are produced in partnership with Lockheed Martin, a Fincantieri press release noted.

“We offered updates on the [Constellation-class] frigate program and then showed the secretary the scope of our recent $300 million investments in our system of shipyards,” said Dario Deste, CEO of Fincantieri Marine Group. “Secretary Del Toro mentioned several times the importance the frigate program is for the Navy and the nation, and that is not lost on our team. Our men and women know that their work is directly linked to the Navy’s ability to project power abroad.”