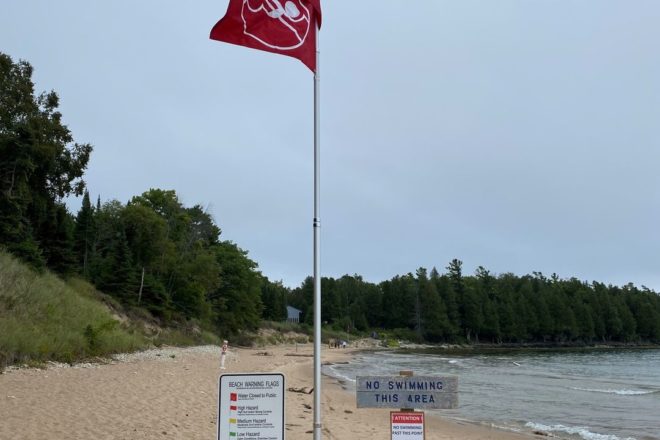 Flag and sign alerting the public of the rip currents.

Over Labor Day weekend, a child got caught in the rip current at Whitefish Dunes State Park and appeared to be going under. That’s how the message came in to dispatch, according to Door County Emergency Services director Aaron LeClair.

The accident involved a child and four adults, according to the incident report prepared by the Door County Sheriff’s Office, with the child unconscious for some time before the adults induced the child to vomit the water prior to emergency vehicles arriving on the scene. In the end, only two patients were transported to Door County Medical Center for evaluation, LeClair said.

The incident turned out far better than it could have, given that the swimmers were in the permanent no-swimming zone, even if only accidentally.

Following the incident, a new warning system was posted on the beach alerting swimmers to the no-swim zone. Though some speculated the two were related, Stepanik said the new system had been in the works since May.

“We used to use buoys to mark the riptide,” Stepanik said – until gale-force waves destroyed the buoys. They opted for a flag-and-sign system rather than replacing the buoys.

“The flags are more visible, and we don’t have to put them in the wake,” Stepanik said.

The Friends of Whitefish Dunes State Park paid for the upgraded warning system, which will alert beachgoers about the strong currents that whip around Cave Point County Park and create dangerous currents at the beach. The warning is important because rip currents aren’t visible to the casual observer.

Although they’re well known to occur regularly enough to close a portion of the beach at Whitefish Dunes, they can happen anywhere along the Great Lakes, according to the National Weather Service (NWS).

By the NWS definition, rip currents – also called riptides or undertow – are currents of water flowing away from the shore that form on ocean and Great Lakes beaches when waves break near the shoreline and pile up water between the breaking waves and the beach. Rip current speeds can carry people offshore far enough that they’re unable to get back due to fear, panic, exhaustion or lack of swimming skills.

The County of Door monitors for beach water quality, but not for weather or swimming conditions. It’s up to swimmers and boaters to inform themselves. At the time of the Labor Day–weekend emergency call, for example, NWS had issued a Beach Hazard Statement that warned swimmers and boaters of the dangerous waves and currents along the Lake Michigan shore.

“We always encourage anyone going on/into the lake to be aware of weather/water conditions, and to make sure someone knows where they’re going and when they’ll return,” LeClair said.