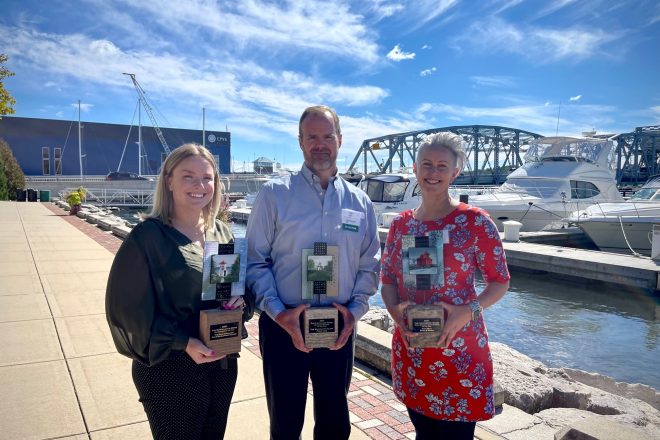 The long-standing, annual awards were changed this year “to be more inclusive to honor all the businesses in our diverse business community we’re so lucky to have in Door County,” said DCEDC director Steve Jenkins.

In this inaugural award, Bexell, who emigrated from Sweden in 2010 after working seasonally in Door County since 1995, was honored for her leadership, vision, growth and commitment to the community. Bexell takes pride in staying open and employing her staff year-round, making her store a go-to stop for locals to buy gifts, clothing and décor.

“Everything I do, and everything I want to do with this business is because of our community and our people,” she said in accepting the award.

In 2013, Bexell opened Spot, a year-round retail store that features bright, colorful and funky clothing, shoes and accessories. She has since expanded the store to create Space, which offers fun gifts and home décor. In 2019, she opened a third store in Egg Harbor, becoming part of a wave of new energy in the community.

“We have all kinds of dreams and things we want to do,” Bexell said. “We are not done yet.”

Range Lights Award for New Business of the Year

Within a matter of weeks, Alexis Fuller had found a way to reimagine and reopen the center in partnership with Door County Medical Center and other supporters. In doing so, she aimed not only to provide great child care, but also to change the paradigm for her employees by improving wages to create a stable workforce. Most importantly, Fuller worked with community partners to raise funds to sustain a child care business within the community.

The Washington Island Ferry Line was selected for its continued investment in the community, and particularly for the recent addition of a new ferry, the Madonna.

As a fourth-generation, family-run business founded in 1940, the ferry line chose to build the Madonna at Bay Shipbuilding in Sturgeon Bay to make a positive impact on the local workforce.

This established business is a lifeline not only for Island residents, but also for every business on Washington Island that relies on the ferry line to transport potential customers daily during the busy tourism season.

Hoyt Purinton credited the employees of the ferry line for the company’s success, and especially their commitment during the pandemic.

“Every business and employee who made it through the mess of the last year deserves one of these awards,” he said.