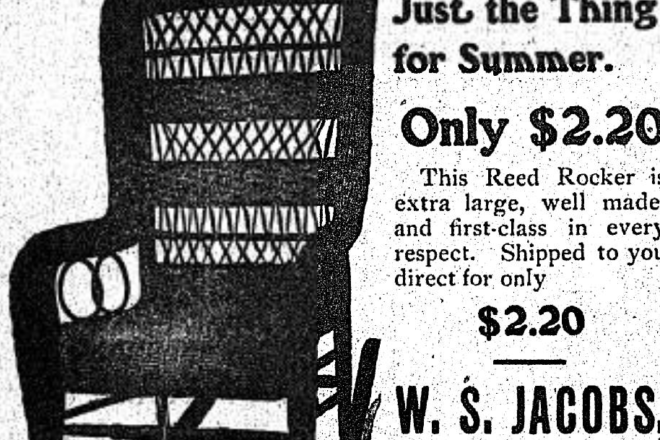 The contract for the work on the county line road, between door and Kewaunee Counties has been let to Swarty & Roberts, of Ahnapee, for $3.80 per rod, for a distance of one mile and a half, the road to be corduroy, the top of the logs to be not less than one foot above the surface, and to be covered six inches deep with earth.

The new saw mill at Lily Bay will be completed and ready for operations about the 1st of August. The frame work is all up and the structure is now being enclosed. It rests on a good solid foundation and when finished will rank among the best in the country. The location is one of the best, and may well be termed a natural mill site. In addition to the mill a new store building will also be erected and the old one will be used as quarters for the workmen during rest time. The mill business will be under the superintendence of H. H. Reynolds while the store will be in charge of Chas. Mashek, and Ed. Arnold will have control of the boarding house. Five cargoes of wood and cedar have been shipped so far this season, and about 800 cords of wood are now ready for shipment.

At the council meeting last Tuesday evening the city attorney was instructed to draw up a “curfew ordinance.” We presume it will be similar to a like ordinance now in force in Negaunee, whereby all children under 16 caught on the streets after 9 o’clock will be arrested.

The contest at “Dreamland” last week for the most popular man in Sturgeon Bay resulted in a decided victory for William Hurst, who beat his opponent, Henry Fetzer, 214 majority. “Billy,” as he is more commonly known, is highly elated over his victory.

The state legislature on Tuesday endorsed the suffrage amendment, both the assembly and senate passing the measure with no opposition, there being one vote against the measure in the upper house and two in the lower.

The legislature of the state of Illinois also endorsed the amendment on the same day and a few minutes before the Badger legislature. These are the first two states to vote on ratification.

ROCK ISLAND – Herban Cance, son of Mrs. Arthur Weber, of Fish Creek, and James Bernel, of Escanaba, were drowned early Monday evening bout one mile off the coast of Rock Island when the boat in which they were crossing over to Washington Island swamped. The bodies have not been recovered.

Michael Mahaney, of Sevastopol, and Howard Mathe, cook at rock Island, who were also in the boat were saved. Mahaney clung to the boat while Mathe swam about 500 feet, clinging to a pond net. The two men were rescued by the C. H. Thordarson yacht.

Cance and Mahaney had gone to Rock Island Monday to secure work but had decided to return home again. Bernel and MAthe were assisting them to Washington Island with a small boat equipped with an outboard motor used as a tender on theThordarson yacht. The party had progressed about half way distance between the two islands when a wave swept over the stern of the boat, the craft turning bottom side up. A party of workers who were watching the progress of the boat immediately went to the rescue in the Thordarson yacht. Mahaney and Mathe were picked up after being in the water about one-half hour.

Cance is well known in this vicinity and last year graduated from the Sevastopol Consolidated school. His step-father is employed at Rock Island. Mahaney will graduate in 1930 and is one of the school’s stellar basket ball players.

Door county cherry and apple orchards will receive some exceptional publicity as the result of a national advertising program which is in the making by the Goodyear Tire & Rubber Co. A representative of the company spent some time in the county during blossom time and had the Riebold Studios take a number of views of the bloom at the Martin Orchard Co., the Reynolds Preserving Co., and the A. W. Lawrence orchards.

Several other views, taken by Rieboldt Studios during picking time last season, were also secured by the tire company, whose representative stated that all views will be used in a special edition of a magazine to be given national circulation.