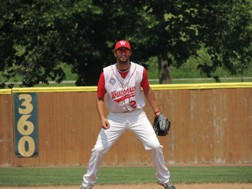 The Wisconsin All-Stars are in their 10th year, and they’ve had 135 players go on to play college baseball on a baseball and/or an academic scholarship, and four of their players were drafted in an MLB amateur baseball draft.

The All-Stars play one of the most challenging schedules in the country, bringing unmatched exposure to college coaches and professional scouts for its players.

In tournament play so far, Kita has played second base, shortstop and third base for the team. The All-Stars are currently 2-1 in the 2013 Decker Sports CWS Tournament in Omaha, Nebraska. In the first three games of the tournament, Kita was 3 for 6 with a double, had 2 RBIs and 2 runs scored. His current batting average for the summer is .520 with two doubles, a home run, 8 RBIs and 5 runs scored in eight games played.