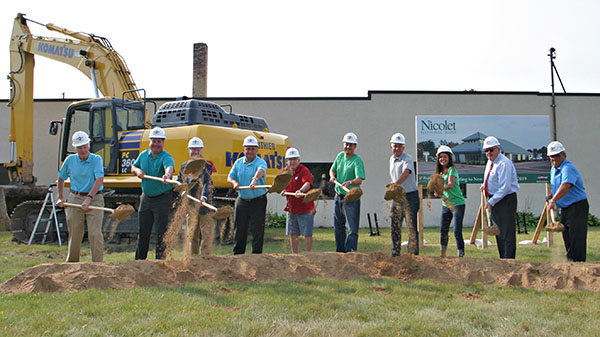 Just two years after the April 29, 2016, merger of Baylake and Nicolet National Bank, Nicolet reiterated its commitment to the community with an Aug. 7 groundbreaking for a new state-of-the-art bank at the corner of 4th and Jefferson in Sturgeon Bay.

“We are drop-dead serious about the trust this community has placed in us, not just Sturgeon Bay but all of Door County,” said Nicolet CEO Bob Atwell during the gathering of area movers and shakers at the groundbreaking ceremony. “We are here to be good stewards of the place you trust in us.”

Atwell said the new bank will reflect the many changes in banking since the almost four-decade old bank building across the street was built.

“Banking is changing and it’s very, very important that we as a community bank strive for greater efficiency,” he said.

In introducing David Voss, Jr., president & CEO of Miron Construction Co., Inc., the company tasked to build the bank, Atwell revealed that in addition to being a banker, he is a potato farmer on Washington Island, and presented Voss with a bag of Washington Gold potatoes that he and his 10-year-old son George dug up on Sunday. Atwell mentioned that diners can eat his potatoes at Chives in Baileys Harbor and Barringer’s Restaurant in Fish Creek.

Voss said after Miron built Nicolet Center on Washington Street in Green Bay, the company shifted its business banking to Nicolet, which he said was “hands down the best decision I’ve made in 43 years.” He added that the subcontractors who will work on the bank project are also friends and customers of Nicolet.

Sturgeon Bay Mayor Thad Birmingham – or “Birmington” as he was introduced by Voss – said the bank’s construction is a clear indication of continued commitment to the city and is already spurring interest and opportunities.

“It matters to us that Nicolet Bank is here,” he said.

Finally, Jamie Alberts, who started with the bank as a teller 23 years ago and today serves as senior vice president of commercial banking, said the old bank was built to house tons of paper that used to go with the territory, but since the bank was one of the first to go online and work with scanned imaging, the new building will reflect the need for less storage space.

He said all 32 employees at the current downtown branch – with a combined 656 years of banking service to the community – will transfer to the new location.

When the new Nicolet National Bank opens next summer, it will be celebrating 130 years of banking service to Sturgeon Bay and Door County, first as Sturgeon Bay Bank, then as Baylake Bank, and now as Nicolet.