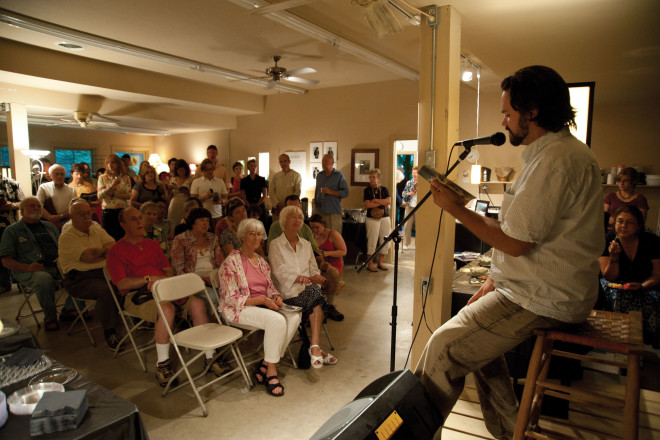 Nik Garvoille is unassuming, a laid-back, soft-spoken man with a lot of talent, a lot. On a sunny afternoon, he and I sit outside Good Eggs with our breakfast burritos, drinking coffee and orange juice, as we often do as coworkers of the Peninsula Pulse. However, this particular afternoon I have a notepad with a list of questions and discover there is a lot I did not know about my friend. 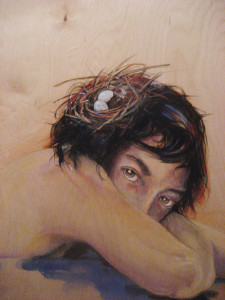 Since moving to Door County in 2004 as a full-time resident, Garvoille has been a bartender, a waiter, a carpenter, a painter, and a baker. “My first job was at Sweeties Pies in Fish Creek,” he says. “I moved to Door County because I had friends working here, and I was very sick of the city. I thought this would be a good place to get a jump on an art career, though I didn’t really use my design schooling for three years.” Though his employment may not have reflected his artistic ambitions (like so many Door County employees and residents), in his spare time he continued to create art.

In fact, in his first year in Door County, after attending the School of the Art Institute of Chicago (SAIC), where he studied painting, graphic design, and fine art, and finishing a bachelor’s degree at the University of Minnesota, Garvoille submitted a portfolio to the Peninsula School of Art’s “Emerging Artists’ Program.”

“Young artists submit portfolios, and they choose the best in the surrounding counties,” he says. “I was the only Door County artist to be picked that year.”

Garvoille states that his interest in art began when he was four or five years old:  “I used to paint with my Grandpa Elvin, mostly birds from the encyclopedia.” He spent a significant amount of time with his grandfather between ages six and 10, while his mother attended nursing school.

“He watched and taught me about painting with watercolor. He was a musician who cooked liked crazy, who came to art a little bit later in life,” remembers Garvoille. 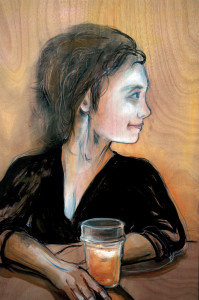 Aside from using watercolor as a boy, Garvoille remembers “always writing stories and illustrating them, using Transformers, Ninja Turtles, or robots” for inspiration.

Now as an artist, Garvoille’s favorite medium is oil paint. He uses oil on wood, paint on wood panel, or gouache (similar to watercolor) on paper. He also writes stories, creates comics (including the popular “Up Nort” featured in the Peninsula Pulse), and digital art.

When asked how he describes his work, Garvoille ponders for a moment and lists a few relevant terms:  “Fantasy, new expressionist with comic book lines, neo-Flemish, avant-garde.”

One of Garvoille’s major contributions to the Door County arts community is Knock, a free literary journal that contains work by a number of Door County artists, writers, and poets. Currently on its eighth issue, the journal is published twice a year.

Garvoille states that the concept for Knock was born during a Door County winter when he was unemployed, right before he began working at the Peninsula Pulse.

“I realized there wasn’t a lit magazine or anything,” Garvoille says. “I liked making books and stuff, and it was a void that needed to be filled. It’s an outlet, especially for young people; there is so much talent in the schools up here, so many talented people.”

For the first issue, Garvoille relied on himself and friends for content. “I had a whole bunch of stories I wrote and thought about publishing, so I had that to work with,” he says. “I asked friends to contribute; I think it was me and three other people – there were maybe five things in the whole issue. I funded it myself. I stapled it myself.” 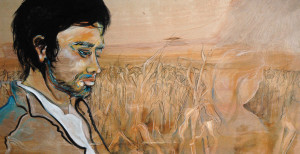 “As the cornfields as my witness, I’ve run out of brains”

He continues to put in a lot of time and effort, sorting through submissions, getting sponsors, doing the layout, the cover, the design, and delivering the publication to businesses all over the county.

Garvoille states that he has received “a lot of good feedback” for the publication. “It’s paying for itself now,” he smiles.

As far as his current employment, Garvoille works as a graphic designer for the Peninsula Pulse. Since 2007, he has learned a lot about the newspaper industry.

“It’s pretty awesome to use your degree for work,” he says. “It’s cool. You have to be creative within this box, and it’s a challenge.” One of his favorite issues of the Peninsula Pulse is the Literary Issue, in which he has a lot of creative leeway.

Regarding the arts community in general, Garvoille believes that “it is getting a lot cooler – lots of cool stuff. I think it’s getting more innovative. The Peninsula School of Art is branching out in new mediums, and there are a lot of younger gallery owners now, like Chad Luberger at Plum Bottom Pottery.”

In his spare time, Garvoille spends a lot of time hiking, treating himself to a nice meal at T. Ashwells, or hanging out at the AC Tap, which has become another venue for his artistic ambitions. 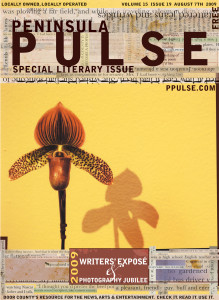 “I am always at the Tap,” laughs Garvoille. “We did a poetry reading at the Tap and read selections from Ralph Murre’s poetry book [Barcode] about bars. We all drank and read poetry.”

In the vein of Murre’s poetry book, Garvoille is working on a series of paintings about people at the bar. “The paintings show people drinking, having a good time or a not good time,” he says.

As for the future, Garvoille, who has spent every winter in Door County since moving to the peninsula, has aspirations of attempting a winter elsewhere:  “I have a lot of pulls from big cities. I have friends in New York City, Chicago, and Seattle. I think I neglected getting on with stuff that scares the heck out of me. It’s very easygoing up here – you have to make projects to get challenged.”

Through all his various projects and jobs in Door County, Garvoille has challenged and created opportunities not only for him, but also for others. Though the city life may steal him away for the winter, he is certain he will be back for summer seasons to come.

For more information or to see more of Garvoille’s work, visit nikenji.wordpress.com or become a fan of Knock on Facebook.com.