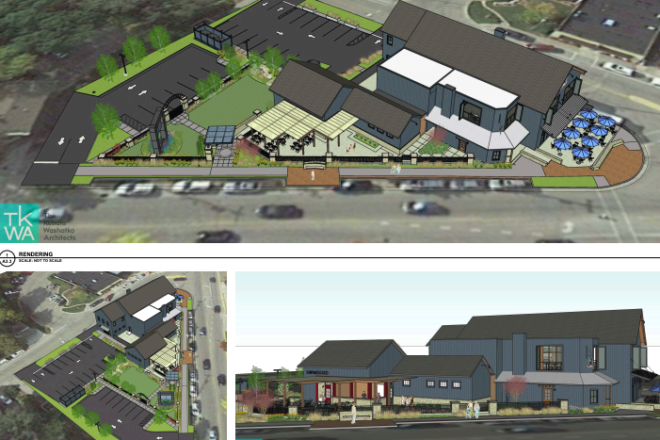 Renderings for a proposed beer garden and expansion of Shipwrecked. The plan relied on a shared use agreement for a driveway on the neighboring property (left side of rendering). The owners of Shipwrecked had not sought the agreement before submitting the plan however, and said at Tuesday’s meeting that an agreement isn’t realistic.

The Egg Harbor Plan Commission spent more than six hours discussing an expansion proposal from Shipwrecked Brew Pub that would make it one of the largest restaurants in Door County. After the meeting stretched into the dinner hour, the commission put the discussion on pause and plans to resume it next Tuesday at noon.

The proposal would include an 1,865-square-foot addition and a 92-seat beer garden on the former site of Christine’s Casuals clothing store. Those would be additions to the nearly 300 seats the existing restaurant had before COVID-19 limited capacity, according to a presentation made by general manager Joe Smith on Jan. 26.

A Village of Egg Harbor ordinance requires one parking space for every four seats, which would require 97 parking spaces for the combined parcels. The existing Shipwrecked on the corner of Highway G and Highway 42 is grandfathered in, though its seating capacity expanded substantially when it rebuilt after a 2017 fire, converting upstairs lodging units into a second-story dining room.

In his presentation to the plan commission, Smith cited the use of 22 on-site spaces; 10 off-site spaces from the Fat Louie’s property, which the Shipwrecked owners own across Highway 42, and at the Cape Cod property on the south end of the village; and 55 on-street parking spaces.

Village code had previously allowed businesses to count on-street parking within 500 feet toward their parking allotment. In December, the village board approved a plan commission recommendation to eliminate the counting of on-street parking spaces toward allotments, but it has not yet formally adopted the new ordinance.

Smith is chair of the plan commission.

The project proposal was met by a long list of people opposed to the project during the Zoom meeting attended by about 75 people. Most commenters focused on the lack of parking and the amount of impervious surface involved in the project.

The village’s limit for impervious surface is 60%, and the submitted plan calls for 81.72% impervious surface. Smith said the development would make up for that with an enhanced stormwater management plan, but plan commissioner Cambria Mueller questioned whether the 60% threshold is simply for water runoff, or also for green space.

Several other commenters pointed to traffic issues at the corner of Highway G and Highway 42, and a change in character that an expansion of the proposed size would make to the village.

Kim Jensen, owner of Mojo Rosa’s and three other village restaurants, said that if the village approves this project, it will set a dangerous precedent for other restaurants such as hers.

“I own half an acre behind Mojo’s,” she said. “I could go pave my backyard and say I’m going to use parking from Trio and Village Cafe. I applied for a building permit to put in a simple bar at the beginning of summer, and I haven’t heard anything back. I don’t think it’s fair to any other businesses if we keep letting this happen. When is enough going to be enough, and when are we going to treat businesses equally? How much does each business need to have before we start acting like a community?”

Bob Hawley and his wife, Jennifer Blahnik, own Signature Pieces, the neighboring property to Shipwrecked. Hawley said the proposal’s reference to a shared driveway with his property was news to him.

“There has never been any easement, shared-driveway agreement on file or existing elsewhere,” Hawley said. “It’s amazing to me that someone would put this much effort into a project and not find where the four corners of their property are. They’ve never approached us about the use of the driveway.”

Chris Roedl of Hatch Distilling Co. alleged that Smith was abusing his position and operating in a conflict of interest in his role as a village trustee and plan commission chair who also oversaw many regulations and committee discussions during the last two years that would affect the proposal.

“He has worked very hard in his position on [the] plan commission to delay restrictions that would have made this project impossible,” Roedl said.

Smith disputed that charge by referring to a motion he made during a Dec. 14 meeting to reduce the amount of on-street parking a business could count toward its total.

“I made that motion; it was seconded; and it was voted down,” Smith said.

Village trustee Lisa VanLaanen clarified that his motion was voted down because the commission instead voted to take more drastic action, voting to eliminate the counting of on-street parking entirely.

Roedl said that in addition to not meeting parking requirements, the failure to meet green space requirements affects more than stormwater-runoff control.

“The ratio is for more than stormwater,” Roedl said. “It’s for green space, and we’re focused on being a Green Tier Community.”