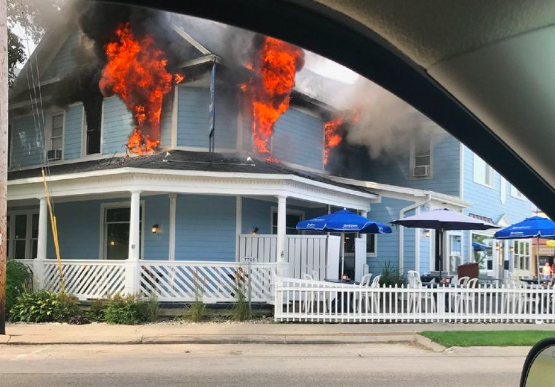 Flames rise from the windows of Shipwrecked Brew Pub before firefighters arrived on the scene Sunday, Aug. 20. The Egg Harbor landmark was a total loss. The new Shipwrecked is under construction and scheduled for a summer, 2018 opening. Photo by Becky Ash.

The owners of Shipwrecked Brew Pub and Inn said they plan to rebuild the restaurant that was destroyed by a fire Sunday, Aug. 20.

Bob Pollman, who owns the establishment with his wife Noreen, was traveling to Mexico when the fire occurred.

“We’ll rebuild one way or the other,” he said when reached by phone. “We’ll just have to see what we can salvage from it.”

Pollman said he was told the brew house and kitchen are OK, but with the amount of water poured onto the building it would be a surprise if the structure can be salvaged. Village zoning code allows non-conforming buildings built before current zoning codes were adopted, such as Shipwrecked, to be rebuilt on their original footprint so long as the new building does not exceed the height or volume of the original building.

Fire engulfed the second story of the historic structure at mid-day Sunday, Aug. 20.

“We think it’s electrical, but a final determination has not been made,” he said.

An employee was cleaning rooms at checkout time Sunday when a fire alarm sounded. When the employee checked the room the fire had already spread to a couch, and flames were spreading to the ceiling, Schopf said. After a brief effort by employees to extinguish the fire, the building was evacuated. No patrons or guests were injured.

After receiving reports from the scene, the response quickly escalated with mutual aid called in from 15 fire departments from across northeastern Wisconsin.

“We started with a two-team interior attack, but after about 30 minutes the floor was spongy and we had to pull our personnel from the building,” Schopf said.

Firefighters evacuated so quickly that they dropped hoses in the building. The fight transitioned into a defensive mode, with firefighters attacking flames from the exterior. Schopf said the age and construction of the building presented a challenge as the fire spread in crawl spaces that firefighters couldn’t get into. The hot, humid temperatures didn’t help.

“We had 90 firefighting personnel on scene and about half of them had to go to our rehabilitation station at some point in the day,” Schopf said.

Firefighters go to rehabilitation when they’ve gone through at least two tanks of oxygen. Up to a dozen firefighters were taken to the hospital for heat-related problems. Door County Emergency Services sent 35 personnel to the scene to support firefighters. Schopf thanked the Red Cross and local businesses for sending loads of food and water for responders.

“We could not have the result we had without the response of the other departments in mutual aid,” Schopf said. “To not have the fire spread to other buildings or completely destroy the structure is remarkable.”

Pollman said he felt bad about the disruption the fire caused to the business community. Hwy 42 through the village was closed to traffic, with vehicles being routed around Egg Harbor, and power was cut off to many village businesses and homes.

The fire appeared contained by 7 pm, but firefighters returned to the scene at approximately 9 pm when hot spots flared up. “That was not the happiest moment back at the station,” Schopf said.

“It’s very sad,” Pollman said. “There’s 20 years of memories for us in there. All my kids have worked there. And to see all these people on Facebook we don’t even know who are impacted by this. Think of all the people that have been through there over the years when it was Shipwrecked and before that. It’s heartening.”

Pollman said Shipwrecked employs about 25 people, many of whom are college kids about to go back to school. Some will be moved to the Pollman’s other Door County establishments. The Pollman’s also own Juniper’s Gin Joint, Fat Louie’s, Door County Distillery and Door Peninsula Winery.

Village Loses A Piece of History

The fire closes a mainstay business and major attraction in the center of the village of 203 residents that swells with thousands of visitors daily through the fall season.

Shipwrecked, Door County’s only microbrewery until Door County Brewing Co. opened in 2013, is housed in one of the oldest buildings in Egg Harbor. The location has long been a centerpiece of dining and drinking in the village, operating under several names.

It was built in 1882 by George Barringer and named the Kewaunee House when it was run by John and Mary Worachek from Slovan, in Kewaunee County. According to the Egg Harbor Historical Society, Fred and Joseph Burdo owned it in 1898 and Ed Fiedler in 1901. In 1904, John and Anna Bertschinger purchased it and expanded the saloon, adding hotel rooms and a dining room.

John and Phoebe Carmody bought it in 1912 and changed the name to Harbor Inn. Olive and Arthur Parent purchased it in 1931. Verna and Maurice “Murphy” Moore operated it as Murphy Moore’s Harbor Inn from 1945 – 1975. It then became The Thimbleberry Inn, then the Blue Iris, and finally the Harbor Point Inn before it was turned into Shipwrecked Brew Pub in 1997.

For years, visitors have claimed the building is haunted by the ghost of Al Capone’s illegitimate son, Jason. The notorious Chicago gangster is said to have hid out in Door County when the heat was on, and the story goes that Jason was found hung in the attic of the building, killed for fear he would inform the police.

The American flag in front of Shipwrecked Brew Pub waves as firefighters battle the blaze Sunday. Photo by Jim Lundstrom.

Flames shoot out of Shipwrecked Brew Pub and Inn Sunday, Aug. 20, before firefighters arrived on the scene. Photo by Mary Dunworth.

Flames rise from the windows of Shipwrecked Brew Pub before firefighters arrived on the scene Sunday, Aug. 20. The Egg Harbor landmark was a total loss. The new Shipwrecked is under construction and scheduled for a summer, 2018 opening. Photo by Becky Ash.

A horse-drawn cart is the only traffic on main street (now Highway 42) in Egg Harbor in this 1895 photo. The Kewaunee House, at right, is now Shipwrecked. The dirt road wouldn’t be paved until the mid-1930s. Photo courtesy of the Egg Harbor Historical Society.

Shipwrecked Brew Pub and Inn after a fire gutted the second story in 2017. Photo by Jim Lundstrom.