It was a few minutes after the Green Bay Packers lost to the New York Giants in the NFC Championship game when my phone buzzed with my older sister Christine’s number popping up. The post-moment phone call from her (she lives outside Chicago) has become as much a part of the Packer game routine for me as the pre-game nerves and slamming any announcer who dare rip Favre.

“Hey Chris,” I said dejectedly as I answered the phone. 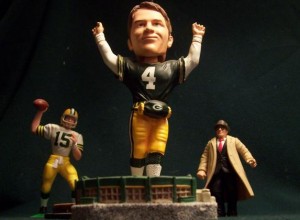 “It’s Jacob,” replied a very terse, almost angry voice on the other end. It was my nine-year-old nephew calling. He wasn’t happy.

“Do you hate the Giants?” he asked.

“Yes Jacob, I hate the Giants.”

“Me too,” he said, seeming relieved to have the affirmation. “I hope they get killed in the Super Bowl. I hope they’re like the Dolphins next year.”

I was impressed that this nine year-old had the sense to equate his revenge with this year’s worst team, the Miami Dolphins. I was also a little concerned that he had acquired my own mechanism for dealing with great fan disappointment – rooting with a vengeance against the team that wronged you (for example, I still hate the Denver Broncos and Dallas Cowboys, for obvious reasons hatched over a decade ago. I also hate Terrell Owens and Steve Young for the touchdown that should never have happened – Jerry Rice fumbled! – in the 1998 playoffs).

Then Jacob asked the question.

“Do you think Brett Favre will retire?”

I did. I just had this feeling. But when he asked the question I choked up a little, and decided this was one of those moments when I had to lie to the little man who I knew was wearing his green Favre jersey in a sad room a couple hundred miles away.

“No Jacob. I think he’ll be back,” I said, trying to muster some confidence for him. “He’ll be back.”

“Good,” he said. “Cause I want him to beat the Giants next year.”

I agreed with him and we ended the conversation. When I got off the phone I couldn’t help but think I had just passed through some inter-dimensional hole and had a conversation with my nine-year-old self.

I was holding out hope that Favre would make my lie the truth, but this morning the announcement came that the era was over.

Every media outlet you can name is posting odes, memories, and lists of Favre’s greatest moments. They all include the standards – Super Bowl XXI, the five touchdown passes on a bum ankle versus the Bears in 1995, the tear-jerking tribute to his father against the Raiders in 2003.

But when I think of what defined Favre’s career (and I saw the whole thing start to finish, religiously…OK, the obsession is creepy), I don’t think of the high-profile games, because a lot of great players have a handful of incredible performances. Even Anthony Dilweg had a moment. What separates the very best is how they compete in the games that don’t count so much, the ones when the world isn’t watching.

Watching Michael Jordan throughout his career was a study in consistency. A Monday night contest against a bottom-feeder still brought out his competitive fury. Some of the most impressive games of Reggie White’s career were sack-less endeavors when his relentless pressure brought through double and triple-teams left you feeling pity for the opposing quarterback and linemen. The brutal force of Walter Payton’s runs on a hapless Bears team early in his career to this day define him more than the team’s greatest years.

And so it was in this vein that I came to truly appreciate Favre in a low-profile Sunday afternoon contest against a bad Detroit Lions team in November of 2002.

Favre threw for 351 yards and two touchdowns in a 40-14 Packer victory. Donald Driver and Terry Glenn were his main receivers and seemed determined to catch everything Favre threw. After three years of watching Favre throw to body-catchers Antonio Freeman and Bill Schroeder it was mind-blowing to see him able to lead receivers because they caught the ball with their hands.

He was throwing lasers off his back foot, across the field, and putting balls in impossible spots, shredding any hope the Lions had in the first 30 minutes of play, with 295 passing yards by halftime. I remember leaping out of my seat several times, simply laughing in disbelief at what he was doing, and thinking it was a shame nobody outside the Midwest was watching, because it was the kind of week-in-week-out performance no Bears, Vikings, Cardinals, or Giants fan ever gets the pleasure to see.

But for 16 ridiculous seasons, we saw it every week. Every play was a chance for the incredible, the “you’ve-got-to-be-kidding-me!” underhand, Peyton Manning-never-did-that kind of play. I’m trying to focus on how much fun it has been, and so far I’m doing better than I thought I would with this (maturity perhaps?).

When my phone rang this morning, my sister’s name popped up on my caller ID. It wasn’t Jacob, he was at school already. My sister wanted to know if it was true.

He’ll get home from school and the career of his first hero will be over. He’ll think it’s not true, think Favre will change his mind or get talked out of it. Like I once handled such news as a kid, he’ll be in denial.

For a little while longer, so will I.