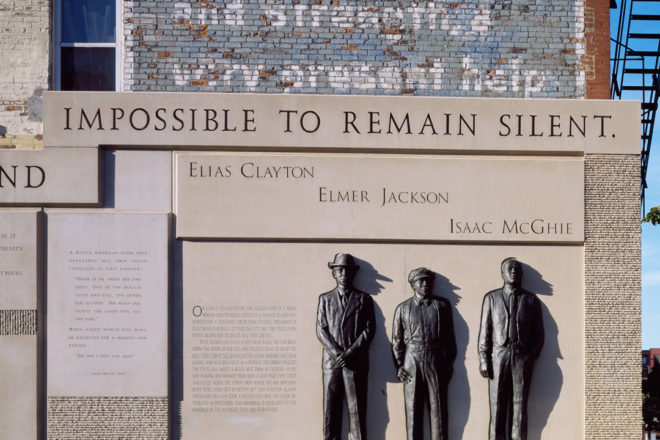 It is easy for us in the north to look down on our fellow Americans from the south for their historic inhumanity against blacks, but racism knows no regional boundaries. The south’s intolerance is just better documented than the racial horrors that took place in the north.

An example of this can be seen in my hometown of Duluth, Minn. In 2003 a memorial was erected at the corner of 1st Street and 2nd Avenue in Duluth’s bustling downtown to the memory of three black circus workers who on June 15, 1920, were snatched from the city jail by a mob and lynched on a lightpole across the street from where the memorial stands.

The men were accused of robbing a teenage couple at the circus and raping the girl. That was the story the teens told their parents when they arrived home late from the circus on June 14. 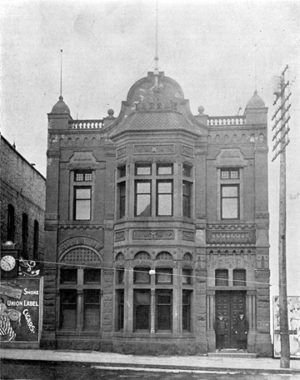 Somehow, the story quickly spread that a young local couple had been victimized by a gang of blacks with the circus that was in town. In all the stories the girl had been brutally raped, and in some she had died after the attack.

Police rousted all the blacks associated with the circus and put them in a lineup. The two teens picked out six men as their assaulters, and those men were arrested.

Tales of the assault passed through town and a crowd grew on Superior Street where the men were jailed. The crowd excited itself into a mob and stormed the jail, grabbing prisoners Elias Clayton, Elmer Jackson and Isaac McGhie, who were beaten and lynched.

A photograph was taken of the mob around the pole where two beaten bodies hang. The third man has been cut down and lies broken on the ground. While I have never seen one myself, the photograph became a popular postcard.

It pains me that this happened in the place where I was born and grew up and learned about life.

I never heard about the lynching while growing up in Duluth. It wasn’t mentioned in the schools I attended. It wasn’t memorialized in any way. It was forgotten.

I knew the area where the lynching took place well. I know just where the jail was. I walked past it a million times and always noticed its architectural peculiarity. But I had no idea what had taken place there.

After leaving Duluth to explore the world in 1974 at age 18, I returned to the area in 1979 to attend college, and during that first year in college, a fellow Duluthian released a book about the hanging called ‘They Was Just Niggers,’ which was a comment made by one of the mob. The lynching photo was on the book’s cover. The book has since been reissued with the less provocative title The Lynchings in Duluth and with a cropped photo on the cover showing the mob and not the lynching.

The book drove me to newspaper microfiche at the Duluth Public Library, where I found the lynchings were well documented in the local newspapers.

What was not documented in the newspapers is a fact that has come out since – a doctor examined the alleged rape victim and found that she had not been sexually assaulted. The couple’s story apparently was a teenage fabrication that had deadly consequences.

In short, that angry mob of Duluthians from June 15, 1920, murdered three innocent men.

Three members of the mob were convicted and sentenced to serve up to five years in prison for rioting. All three served about a year in prison. No one was ever convicted of murdering the three men.

Max Mason, another of the black circus workers, was convicted of rape and sentenced to serve seven to 30 years in prison. Despite a very sketchy case against him, his appeal to the Minnesota Supreme Court was denied. He was released from prison in 1925 on the condition that he immediately leave the state.

The lynchings prompted the small black community in Duluth to form a local branch of the National Association for the Advancement of Colored People in September 1920. Their first speaker was one of the founders of the NAACP, W.E.B. DuBois.

It also prompted the Minnesota legislature to adopt an anti-lynching bill in 1921 that held police officers negligent should a mob gain access to prisoners. 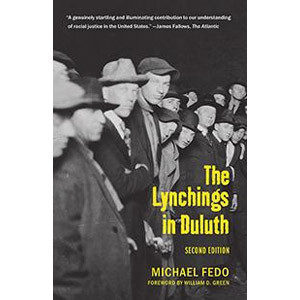 The three victims of the mob were buried in unmarked graves in a Duluth cemetery. In 1991 granite headstones were installed with their names and the inscription “Deterred but not defeated.”

In 2000 – 80 years after the lynchings – a grassroots committee was formed with the intent of “fostering racial justice in the community through education, reconciliation and healing.” The group was called The Clayton Jackson McGhie Memorial, Inc., and it concentrated on raising funds to memorialize the three victims. Three years later, on Oct. 10, 2003, the memorial was dedicated before 3,000 Duluth residents.

A quote by Edmund Burke runs across the top of the memorial: “An event has happened, upon which it is difficult to speak and impossible to remain silent.”