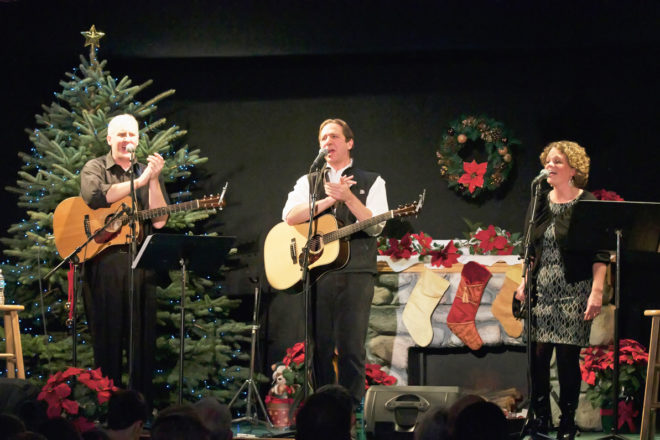 “It all started as an opportunity to extend that holiday feeling beyond Christmas morning,” said Holly Feldman of Home for the Holidays. “So many people talk about the ‘let down’ that follows shortly after the ‘build up’ for the holiday season.” The show “has been very popular with folks who cherish the season and don’t want to see it end on Dec. 25.”

In that spirit, Northern Sky Theater again is presenting Home for the Holidays, running from Dec. 27 through 31 at the Old Gibraltar Town Hall in Fish Creek. Lewis, along with veteran performers Fred “Doc” Heide and Feldman, will offer a program of seasonal songs, instrumental virtuosity, and holiday humor.

“The Town Hall is well suited for the show,” Heide said, “wonderful for this time of year, a warm, cozy historic venue.” The small stage is “a sweet setting, good for harmony.”

The hall “sounds natural,” Lewis added, “nice acoustics, more intimate, more personal, makes you feel like you’re going back in time, getting a slice of music and entertainment not easy to get anywhere else, a quaint, charming, unique, special atmosphere.”

In short, a heritage building in a small village is a classic spot to return home for the holidays.

This year’s show is the tenth in an annual series, after a hiatus since 2010, but each year offers different selections. Lewis and Heide, who have been friends for 20 years, not only make music together but also collaborate on productions, including this one.

“I like to find obscure beautiful Christmas carols,” he continued.

He gives as examples the spiritual “Poor Little Jesus” and the Appalachian song “Jesus, Jesus, Rest Your Head.”

And he has written a new song for the show, “Follow That Star,” with lyrics that offer the perspective of the Wise Men and their incredible journey to the scene of the nativity.

He has composed comic pieces, too, some political humor that deals with the occasionally tense conversations that have been taking place around holiday dinner tables after the presidential election.

The trio of performers is well known to fans of Northern Sky Theater, who have enjoyed the long tradition of original summer musical productions in the Peninsula Park amphitheater. Heide is the co-founder of Northern Sky and has performed professionally for more than four decades, co-offering 20 shows as well as recording CDs.

Lewis is an award-winning musician who has not only appeared with Northern Sky, but from coast to coast with well-known musicians. He, too, has issued CDs.

Feldman has dual roles with Northern Sky, having performed with many of the company regulars and also working as the theater’s Director of Development and Public Relations.

The trio enjoys playing together. “Eric is a ray of sunshine,” Heide said, and his “instrumental ability is jaw-dropping.” He has “tremendous sensitivity” and is “easy to work with.”

“Holly has a really rich alto voice and an incredible work ethic,” he added, and he especially praises her work with close harmony.

“Doc is well prepared, and thinks everything through,” Lewis said. “He is good at everything, funny, a seasoned performer!

“Holly adds an extra dimension,” he continued. “She has a bubbly personality” and he “can’t help smiling with the combination” of the three of them as Feldman and Heide are “very easy to be around.”