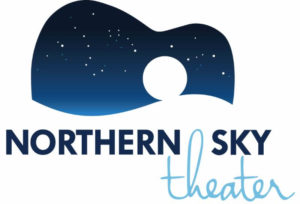 If you’re looking for the ultimate Door County experience, we’ve got you covered. Chicago Tribune calls Northern Sky “as much a Door County tradition as cherry preserves.”

Two unique theaters showcase original musicals from “one of the most exceptional professional troupes in the country (Chicago Tribune).” Find yourself nestled in the woods under the stars at the Peninsula Park outdoor stage. Relax indoors at the intimate, new Gould Theater.

Enjoy three shows in rotating repertory June 10 through August 29 at our 650-seat park amphitheater. The amazing setting has you tucked into the forest of one of Wisconsin’s most-loved state parks. Under the pines and starry sky, we’ll lift your spirits. Join us for the world premiere of a sweet musical comedy Love Stings. Delight in two fan favorites: Belgians in Heaven and Fishing for the Moon.

You’ll find our new 248-seat Gould Theater located a few minutes from the park. Set on 40 wooded acres, it’s modern, yet blends with Door County’s natural elements. Towering windows in the theater and lobby frame the trees and stars. Four summer shows will be on the Gould stage June 16 through September 5. We’ll feature a reprise of the 2019 hit comedy Dad’s Season Tickets. Take in Song of the Inland Seas and The Mountains Call My Name in honor of our 50th anniversary. Rounding out the season is SkyWriting! This whimsical new musical celebrates nature, conservation and young writers.

Shows continue into the fall, September 11 through October 31, at the Gould. Naked Radio, our 2017 hit musical comedy, is back by popular demand. The election-year favorite And If Elected returns in October.

No matter the show or venue, Northern Sky is must-see entertainment while you’re on the Door peninsula. Discover stories you’ve not heard before. They’ll become the ones you can’t wait to share!