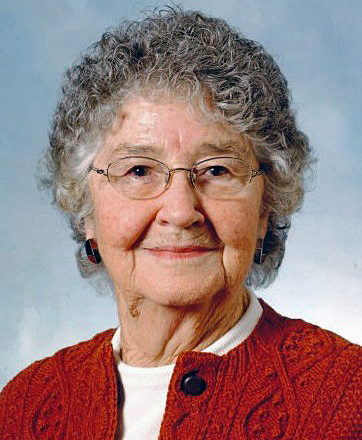 She was born July 16, 1924 in Oakley, KS, the daughter of Frank Horace Beam and Alice Edith (Myers) Beam. In 1936, Alice’s family moved to New Castle, IN where she continued her education and graduated from high school. She initially worked for an insurance company as a bookkeeper and secretary. Alice was united in marriage to James Riley Keys on October 17, 1947 in New Castle. Two years later, they moved to Illinois where James opened his own architectural firm. Alice assisted with the bookkeeping and secretarial duties in addition to helping other family with anything else that needed to be done.

She and James moved to Door County, WI in 1974 and made their home in Sturgeon Bay. They were blessed with over 46 years of marriage. James passed away March 10, 1994.

Alice was a member of the Sturgeon Bay United Methodist Church and helped as a greeter there. She volunteered at the Miller Art Center in Sturgeon Bay and was also a member of the international women’s educational opportunity effort, P.E.O. (Philanthropic Educational Organization). Alice was a very good bridge player and also enjoyed bowling in league at Worley’s in Sturgeon Bay. She spent hours tending to her garden, which often resulted in huge piles of old plant growths she had cut away. Alice was a very social person and loved getting together with her daughter, Brenda, weekly.

She will be deeply missed by her daughter, Brenda of Idlewild in the Town of Nasewaupee, Sturgeon Bay; grandson, Sam Keys of Berwyn, IL; step-grandson, Joe Popour of Green Bay; step-great-granddaughter, Giselle Popour; sister, Charlotte Beam of New Castle, IN; many nieces and nephews; and friends.

Her life was honored with a funeral service on Saturday, November 11, 2017 at Huehns Funeral Home in Sturgeon Bay with Rev. David Leistra officiating. Alice will be laid to rest in Bayside Cemetery beside her husband, James.

Visitation for family and friends will be held at the funeral home on Saturday from 11:30 a.m. until the time of service.