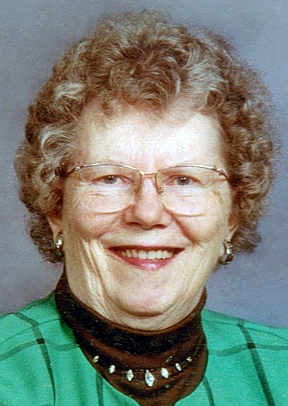 She was born with her twin sister, Shirley on July 5, 1927 in Sawyer, the daughter of the late Albert and Erna (Zastrow) Robertson. The family later moved to the country on County S where Audrey and her sister attended Wilson School. She later attended Sturgeon Bay High School. Audrey worked with her family harvesting cherries on her father’s farm and later years at Fruit Growers Canning Factory, Goldman’s Cherry Factory, and Wisconsin Apple Factory on East Walnut Street on the west side. She also worked a few years at Amity in Sturgeon Bay.

One day Audrey met Chester Wodack at an ice cream parlor while Chester was a Tech Sargent with the U.S. Air Force, and he later proposed to her. They were married on March 14, 1948 at the Sturgeon Bay Moravian Church parsonage. She and Chester operated an 80-acre cherry orchard. He preceded her in death on July 9, 1990.

She loved being with her family especially her grandchildren and great-grandchildren. Audrey loved the family get-togethers, going out for lunch with Rose, and their many road trips together. She also enjoyed playing the piano, was self-taught and played by ear.