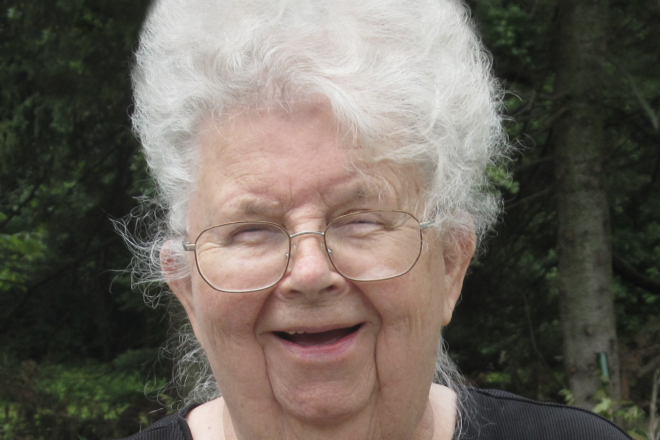 She was born July 18, 1925 on Washington Island, the daughter of Ludwig “Louis” and Anna Katherine (Jorgensen Hansen) Gunnlaugsson. Dorothy attended school on Washington Island and then continued helping care for her younger siblings and helping the family farm on East Side Road. Through her sister, Rhoda, and Rhoda’s husband, Bill, (Dorothy) met Bill’s cousin, Dennis Gerald Lindsey, who was originally from Illinois. They were married on May 12, 1945 in Benton, IL.

Dorothy and Dennis were “roamers.” After settling down in a community for a period of time, they would pack up and look for the next place to call home. They made friends everywhere they went. Dorothy and Dennis initially went out to California and started up a chili restaurant. They returned to Washington Island and started several restaurants on the island, some of which were the first (on the island): Center Grill, Lindsey’s Drive-In (which became Lindsey’s Restaurant and eventually Fosco’s Restaurant), The Checkerboard (now the Albatross Drive-In) also owned the home behind, along with other homes over the years on the island. Aside from running their restaurants, Dorothy and Dennis raised their three girls, Sue, Rose, and Sara and cared for their other relatives on the island. Dorothy and Dennis were of The Truth (faith) with Dorothy professing in her early 60s. She made sure her family was educated with the Bible, which they read frequently together. They bought a home in Tampa, FL where they enjoyed visits with family and friends.

Some would describe Dorothy as a “force of nature,” a strong and independent woman. She loved her family and always made sure her kids and others from the area had a place to play growing up. In her later years, she wrote small articles for the Peninsula Pulse (newspaper).

Dorothy will be laid to rest in the Town of Washington Cemetery on Washington Island, beside her husband, Dennis, with a graveside committal service at a later date.

“Our family would like to express our heartfelt thanks to the staffs of Door County Medical Center and Unity Hospice for the wonderful, compassionate care given to our mother.”

Expressions of sympathy, memories, and photos of Dorothy may be shared with her family through her tribute page at www.huehnsfuneralhome.com.