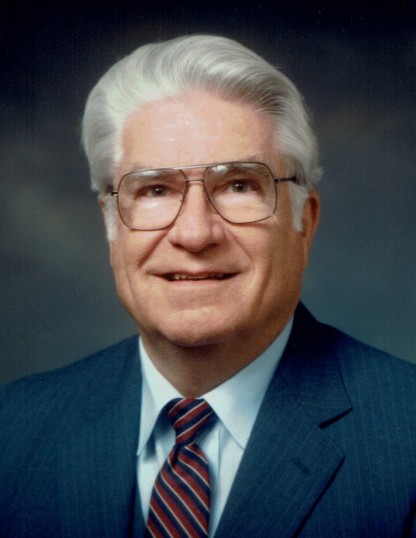 Ellsworth L. Peterson, 94, a lifelong Sturgeon Bay industrialist and philanthropist, died at his home on Wednesday, May 2, 2018. He was admired and loved by his family, friends, and many employees as a role model for his quality of character, integrity and civic dedication.

Born in Sturgeon Bay on January 16, 1924, to Fred J. and Irene (Laabs) Peterson, Ellsworth was graduated from Sturgeon Bay High School in 1941 and the United States Merchant Marine Academy, Kings Point in 1946. He served his country as a midshipman during World War II, and after the war’s end and graduation, he returned to Sturgeon Bay to rejoin his family’s shipbuilding business.

In 1965, he took over from his father as President of Peterson Builders, Inc. (PBI). Under his leadership, PBI emerged as a premier shipbuilder and developed an international reputation as a versatile shipyard producing Navy vessels for thirteen countries worldwide. At its peak, PBI and its affiliates employed nearly one thousand workers.

His family and community were important to Ellsworth. He and his wife of 35 years, Carla, have supported local needs and served many organizations in Door County like the YMCA, Peninsula Players, Northern Sky Theater, Door County Maritime Museum, Rotary just to name a few. Through his philanthropy and volunteer time, he has left a legacy of life enrichment for generations to come.

During his lifetime, Ellsworth was able to achieve a unique balance of contributing his time and talent beyond his full-time career. He was involved in dozens of nationwide maritime organizations including the Society of Naval Architects and Marine Engineers (SNAME) where he was elected Honorary Vice President for Life. Further, he received an award in recognition of a decade devoted to the National Shipbuilding Research Program as Chairman of the Ship Production Committee for leadership improvements to productivity and numerous contributions to shipbuilding technology. In 1981, Ellsworth received the Vice Admiral Jerry Land Medal for outstanding accomplishment in the marine field, and in 1993 the “Ship of the Year” award.

Ellsworth was readily known at the Pentagon for his dedication and wisdom in the maritime industry. He was a member of the Navy League of the United States, the Royal Institute of Naval Architects, American Bureau of Shipping, Naval War College Foundation, American Society of Naval Engineers, and many other affiliations.

Throughout his life, he supported his alumni, the United States Merchant Marine Academy, and was the recipient of the Admiral McCready Award and named “Man of the Year.” Today, cadets enjoy gathering at the “Ellsworth Peterson Lounge” on the King’s Point campus!

After his retirement, he and Carla enjoyed four cruises around the world before settling in their retirement home in Honolulu, Hawaii. His leisure time was most enjoyed sailing on the Utopia on Lake Michigan and Green Bay at the helm of the schooner built by his Father in 1946.

Ellsworth is survived by his wife, Carla; his daughter, Marsha (Tom) Kerley, of Kamuela, Hawaii; granddaughter, Jennifer (Jordan) Kobilca of Sturgeon Bay and their children, Kenton and Carver; grandson, Brian (Mimi) Kerley, of Kamuela, Hawaii and their children, Nolan and Olive; brother-in-law, Fred (Barbara) Unes; niece and nephews; faithful friends, Kristen and Kelly Bachman and, of course, the “Geriatric Crew” on the Utopia (Jerry, Robert, Carla).

He was preceded in death by his parents; son, Gary, and step-son, Brian McKown; his spouse, Mary Jo (Washburn); and his brother, Robert.

A memorial service will be held at 11 am on Friday, May 18, 2018 at St. Joseph Catholic Church in Sturgeon Bay. Burial will be in Bayside Cemetery.

In lieu of flowers, expressions of sympathy in memory of Ellsworth L. Peterson may be made to the Door County YMCA Endowment Fund or to the Carla and Ellsworth Peterson Charitable Foundation that supports Door County non-profit organizations.

Arrangements have been entrusted with Huehns Funeral Home, Inc. & Door County Crematory LLC. Expressions of sympathy, memories, and photos of Ellsworth may be shared with his family through his tribute page at www.huehnsfuneralhome.com.