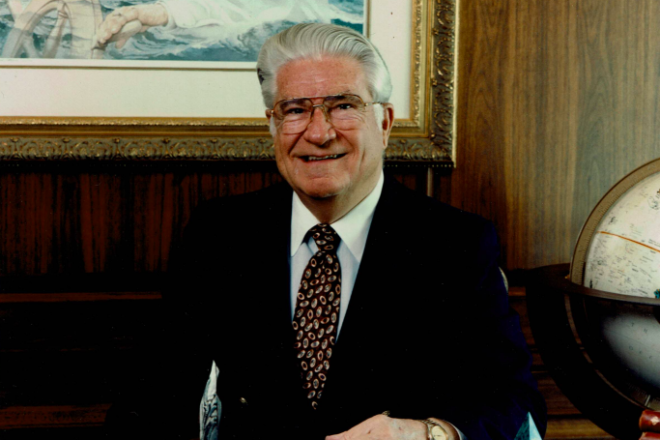 For six decades, Peterson Builders Inc. pumped oxygen into the lifeblood of the Sturgeon Bay economy. The shipyard known for building Navy vessels employed more than 1,000 people at its peak, and when profits soared, they were proudly shared with employees. The revenue that trickled up went to executives who lived down the street, and those that flowed into the pockets of the man at the top, Ellsworth Peterson, flowed back out in sums large and small to the people and nonprofits of the city and Door County.

Door County lost a man of another era when Peterson died late in the afternoon May 2, just as a heavy fog came creeping across the water toward his home on the bay of Sturgeon Bay. He was 94. 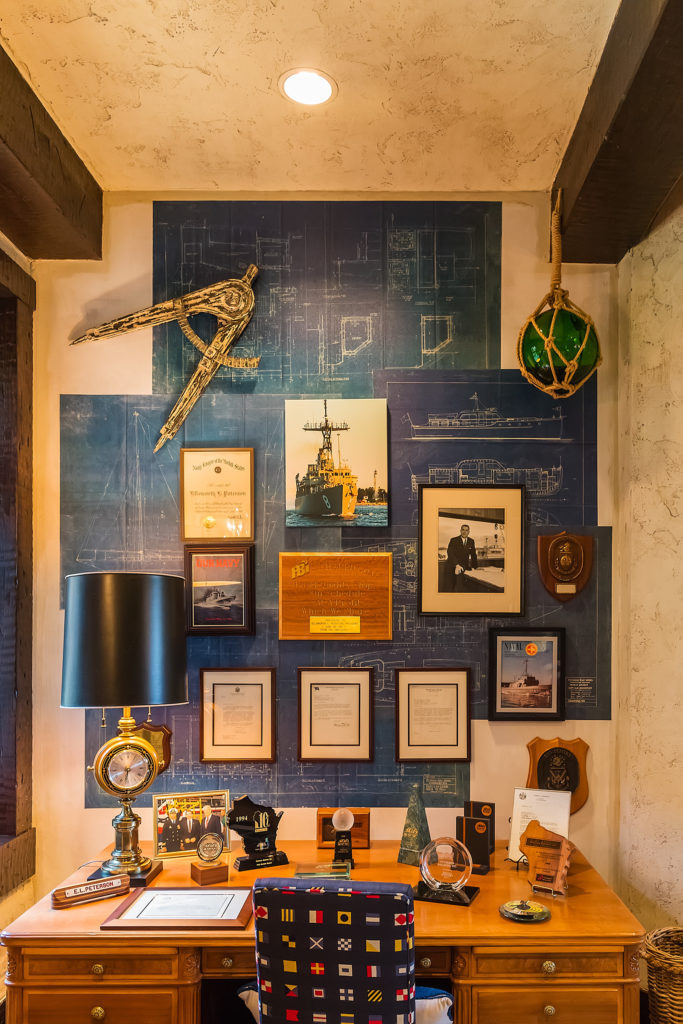 A wall in the Peterson’s room dedicated to Peterson Builders Inc., including a plaque engraved with the company’s goal: “Build Quality Ships, On Schedule, At A Profit, Which We Share.” The wallpaper is a reproduction of Fred Peterson’s plans for the Utopia, Ellsworth Peterson’s beloved schooner. Photo by Len Villano.

Peterson was born Jan. 16, 1924, in Sturgeon Bay, the son of Fred and Irene Peterson. He got his start in the family boat building business by cleaning out bilges with his brother Bob as a boy, then graduated to his first official job in the stockroom at age 17. After high school he entered King’s Point Merchant Marine Academy in New York, to which he maintained a connection throughout his life.

When the war ended he hoped to continue traveling the world in the Merchant Marine, but his father needed him home at the shipyard. In 1956, he took the helm of the company and spent the next 40 years building on his father’s success, billing the company as “The world’s most versatile shipbuilder,” with a workforce that could handle any job.

“His seminal contribution came in what he did in the years after World War II,” said Bob Desh, Door County maritime historian. “He felt that there would still be a role for an independent shipyard to earn contracts for small combatant ships. He saw it as a way to make PBI unique, a yard that could make a ship out of anything.”

There were difficult years, but his confidence buoyed the company. His wife Carla called him the most optimistic person she ever met, known to say simply, “things have a way of working out,” perhaps inspired by watching his father build the business in the midst of the Great Depression.

Peterson led as a man of few words, hard-driving but patient. Fair but firm. As his career progressed, his accomplishments and accolades piled up. In 1974 he was named the Wisconsin Small Business Man of the Year. He counted senators, congressman, governors and secretaries of the Navy among his friends. His ships could be found in ports around the world and on the cover of magazines. But he remained a humble man from a small shipyard town, revered by his workers and community leaders.

Jim Stawicki, general manager of Sturgeon Bay Utilities, started his career as an accountant for PBI and worked his way up to President. He holds nobody in higher regard than Peterson.

“I learned a lot of what I know about business and how to treat people from watching Ellsworth,” Stawicki said. “You’d be challenged to find anyone who worked for Ellsworth that didn’t respect the hell out of the man. Truly a larger than life guy.”

“He was always doing the best for his company,” Graul said. “He was an outstanding individual and seemed to have the best interests of the people of Door County in mind.”

PBI paid family supporting wages, offered generous benefits, and a profit-sharing program that gave millions of dollars back to employees.

Friends called him Ells, others called him the “Shirt-sleeve Shipbuilder,” known as a straight shooter who was well-respected by those in the military hierarchy. He tirelessly worked the halls of Congress to secure military contracts and bring work back to Sturgeon Bay.

“Ellsworth knew who to talk to,” Stawicki said.

In the course of those visits to woo Congressmen he met Jerry Waite, who became one of his closest friends and a frequent crewmate on Peterson’s beloved schooner, the Utopia. The sailboat was designed and built by his father Fred at the end of World War II, intended as a showpiece to market PBI as a builder of luxury yachts.

“Do you love anything more than you love that boat?” Waite once asked him. Peterson chuckled in response.

“He wasn’t a golfer,” Carla said. “Sailing the Utopia was his passion.”

In the 1980s and early 1990s business boomed as PBI was flush with contracts to build minesweepers for the U.S. Navy. Peterson attempted to diversify and carve new niches for the company, but in 1995 things finally stopped working out for PBI, and he slowly, painfully wound down the boat yard his father had founded and he had worked in all his life.

But in retirement he remained committed to his city. He invested in the Door County Economic Development Corporation and donated the property that became its business incubator.

“He was involved in just about everything that went on in Sturgeon Bay and Door County,” recalled Bill Chaudoir, longtime head of the Door County Economic Development Corporation. 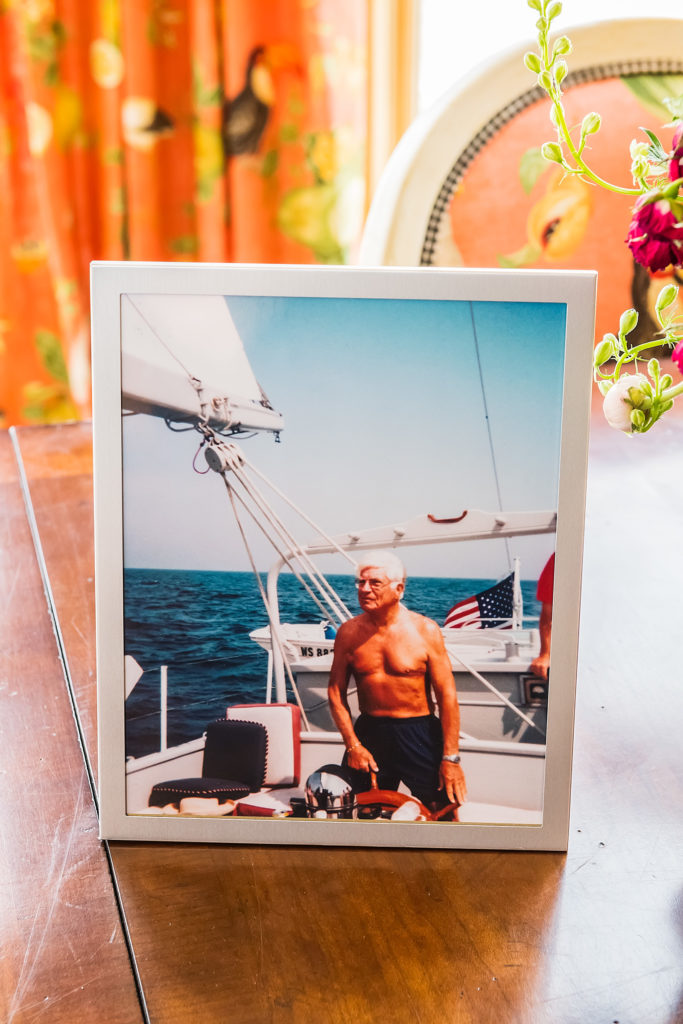 Generations of city kids learned to swim at the Peterson Pool, built by Fred Peterson in 1963 and donated to the city. His father’s charitable example imbued in Ellsworth an ethic of giving back that would have enormous impacts throughout Door County, and later, in his second home community in Hawaii.

That impact can be seen at Peninsula Players, where Ellsworth and Carla provided a $1 million challenge grant to spur fundraising for a new theater. It can be seen in the rooms of the Door County Maritime Museum, a recipient of substantial donations from the Petersons. But perhaps nowhere is their impact more profound than in their gifts to the Door County YMCA, where they provided seed money for a capital campaign in the 1990s that resulted in the building of two program centers in a community of a size that normally wouldn’t have one.

“When we discussed the idea, it seemed far-fetched,” Chaudoir said. “But Ellsworth liked the idea, and if he liked it, we thought we had a shot. He had a lofty vision of what this community could be.”

“It’s the perfect feeding ground for all ages,” Carla said in explaining their support of the YMCA. “It serves children, teens, young adults, seniors. It covers all the bases of the population. It fosters the growth of self-esteem, and if you’ve got self esteem, there’s nothing you can’t handle.”

His friends said he was always looking for ways to give back to the community and always had an open ear for new ideas. While his name can be found on plaques and buildings throughout the county, there are countless other quiet gifts that few know about. For a man who leaves an immense hole to fill, he cared little about legacy. “I don’t think he ever did anything because he wanted to be remembered,” Waite said. “He did it because he felt it needed to be done.”

“People like him are just not replaceable,” Chaudoir said.

Funeral services for Ellsworth Peterson will be held at 11 am Friday, May 18, at St. Joseph Catholic Church in Sturgeon Bay with Fr. Ron Colombo and Fr. Robert Stegmann officiating. Burial will be in Bayside Cemetery.

Friends may call from 4 – 7 pm Thursday, May 17, at Huehns Funeral Home in Sturgeon Bay and at the church, Friday morning, from 10 am until the time of services.

Peterson is survived by his wife, Carla, and daughter Marsha Kerley. He was preceded in death by his sons Gary Peterson and Brian McKown. 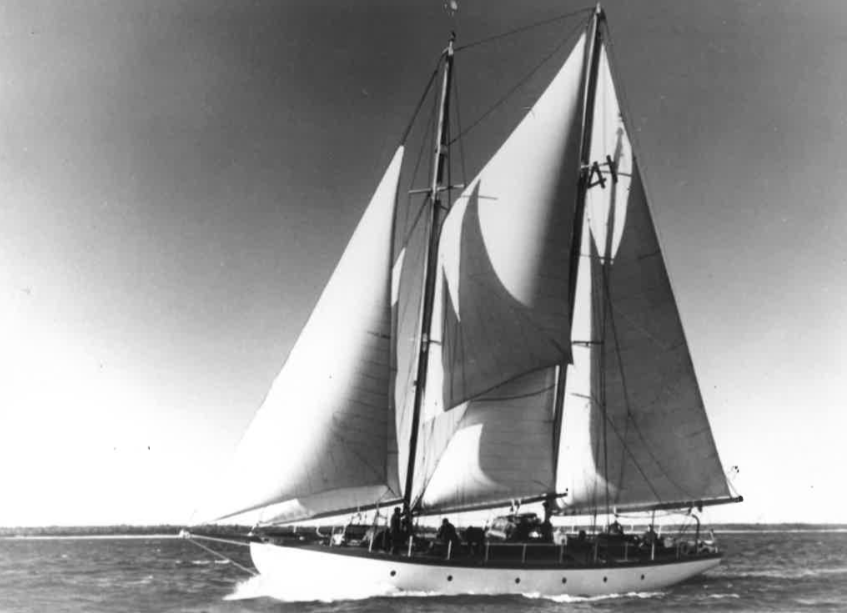 The Utopia in one of its early voyages. Submitted.

“He was a sailer’s sailer, a mariner first and foremost.” – Bob Desh, former head of the Door County Maritime Museum

“There wasn’t a more committed businessman than Ellsworth Peterson to this community.” – Bill Chaudoir, former director of the Door County Economic Development Corporation

“He treated people well, and I think you’d have a tough time finding anyone at PBI who didn’t think he was both firm and fair.” – Jim Stawicki, former Peterson Builders Inc. accountant, CFO, and president

“He was proudest of his daughter and family. And of his contribution to the U.S. Navy.” – Carla Ellsworth

“A person should bite off more than they can chew, and chew it.” – Ellsworth Peterson

“I never heard the man swear. He was a gentlemen’s gentleman.” – Jerry Waite, friend and frequent crewman on the Utopia