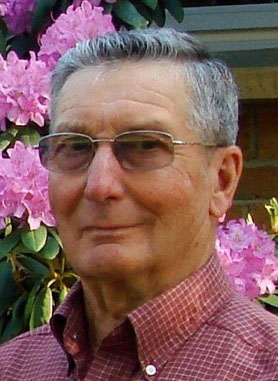 Elmer served as a member of the United States Armed Forces during the Korean War. During his professional career, he worked in Milwaukee before joining Nekoosa Papers in 1955 where he worked for 35 years in a variety of positions before retiring in 1990.  He also managed a dairy farm near Vesper, Wisconsin from 1956 through 1995.

In 1995, Elmer and Mary moved to Sturgeon Bay on the shores of Green Bay.  Elmer regularly volunteered with the “Friends of Potawatomi State Park”.  He could often be found at the park cleaning campsites, building benches and chopping firewood.  Each spring he tapped trees on his property, collected sap every day and produced pure maple syrup, truly treasured by his family!  In 2015, Elmer and Mary moved to Greendale, Wisconsin near their daughter Linda.

Elmer is survived by his wife, Mary and their children Bill (Cathy) Horn of Grand Rapids, Michigan, Jerry (Cindy) Horn of Oakland, California, Sheryl (Ken) Morgan of Pleasanton, California and Linda (Jeff) Horn of Franklin, Wisconsin.  He is also survived by seven grandchildren, Ben Bandt, Andrea, Erica, Kristin, and Gregory Horn, and Kelly and Laura Morgan.  He is further survived by a sister Dorothy Luken of Pittsville.

He was preceded in death by his parents; sisters, Norma Schmoldt, Lucille Bubolz and Florence Rumlow and brothers, Kurt, Edward, Lawrence, Leonard and Carl Horn.

A memorial service will be held at 11 am Tuesday, November 22, 2016 at St. Joseph’s Catholic Church in Sturgeon Bay with visitation starting at 10 am that morning.  The family requests donations be made to the “Friends of Potawatomi Park” in lieu of flowers.  Forbes Funeral Home is in charge of arrangements.