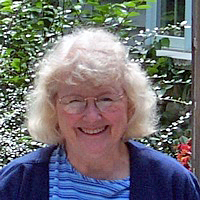 Margie was born in Brainerd, Minnesota on October 13, 1928. Shortly after her birth, Margie’s family moved to Green Bay. She graduated from East High in Green Bay. Many of Margie’s summers were spent in Ellison Bay at a family friend’s orchard. After high school, Margie worked at the Brown County Library’s main branch, until she met the love of her life, William “Bill” Nichols.  Margie and Bill were married on March 5, 1949; they were married 68 wonderful years. Margie was a homemaker living in Green Bay and enjoyed her family, gardening, crafts, and decorating. She was a life-long Packer fan and though it has been several years since her and Bill attended a Packer game, they always watched them on TV.

In 1995, after Bill retired, they built their dream house in Sister Bay. They moved in one blustery day in December and have been there ever since. They enjoyed the many restaurants and beautiful scenery of the area.

She is predeceased by her husband of 68 years (Bill), parents, Carl and Rowena Werner of Green Bay, Wis., her brothers, Bob, Carleton, and Dick, and one granddaughter, Michelle Houlihan.

Survivors include two sons Bill Jr. (Sue) and Michael and her daughter, Amy Schmidt and three granddaughters, two grandsons, and 13 great-grandchildren and two sisters, Gloria Hannum and Patsy Kreuser and one brother, Don.

Memorial plans are being made for a later date.