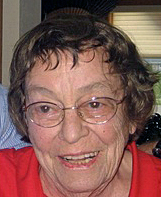 Marjorie C. Binder, 96, of Sister Bay, Wisc. and formerly a resident of Renovo, Penn. passed away at Sister Bay on Sunday, April 22, 2018. A Mass of Christian Burial will be celebrated at 3:00 p.m., Monday, April 30, 2018 at Stella Maris Parish in Sister Bay, Wisc. Friends and relatives will be received at the church from 2:30 – 3:00 prior to the service. Interment will be at St. Joseph Cemetery, Hyner, Penn.

Marge was born May 9, 1921 in Renovo—the fourth daughter of the late John P. and May (Pruner) Binder. She was a graduate of St. Joseph’s Catholic School and a life-long member of the Catholic Daughters of America. She attended Chestnut Hill College and Lock Haven State Teacher’s College and graduated with a degree in Health and Physical Education.

Marge was very patriotic and served her country during WWII and the Korean War. During WWII she joined the Red Cross and was assigned to the staging areas of France and Germany working in the recreation centers and serving as a Clubmobile Captain and “Do-Nut Dolly”. In Japan she was stationed with the Air Force as a Recreation Director. Part of her experience in Japan was documented in a book by Joseph Anthony titled “The Rascal and the Pilgrim”. She continued to serve her country when, in 1953, the Air Force hired her to work in England. There she served as Civil Service Recreation Director at the Air Force bases of Molesworth, Alconberry and London.

Because of her work in the Red Cross and Civil Service for the Air Force, she is honored as a charter member in the Women In Military Service for America Memorial located at Arlington National Cemetery.

In 1965 she returned to the United States and settled in Door County, Wisc. where she and her friend Bibs McAghon purchased and ran Wilson’s Ice Cream Parlor. They with another friend Sarah Wright also purchased the Red Barn Antique Shop which they ran until they retired in 1999.

Marge had an outgoing and fun-loving personality that drew people to her and made her a favorite with her family and friends. She had a generous heart and supported many charities both in Door County and Renovo.

Memorial contributions can be made in her memory to Greater Renovo Area Heritage Park, 530 Erie Ave., Renovo, Penn. 17764 or to your favorite charity.