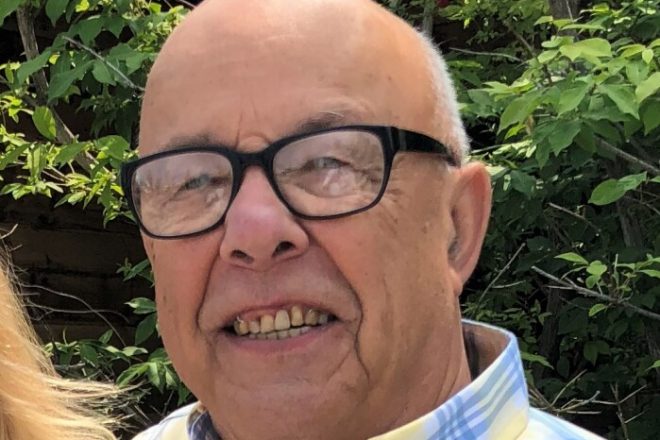 Michael James Walker, 80, of Sister Bay, WI died at 9:47am on Sunday, October 17 while in hospice care at St. Vincent’s Hospital of Green Bay, WI ending his battle with cancer.

“Mike” was born January 24, 1941 at St. Luke’s Hospital in Chicago, IL to Clarice (Kamin) and James Mabin. He grew up in LaGrange Park, IL and attended Ogden Oak Grade School. In June 1955 he tragically lost his father, James, at age 14. His mother, Clarice, remarried Merton Walker in 1956 and they moved to Hinsdale, IL. Merton later adopted Mike and changed his name to Michael Walker. Mike graduated from Hinsdale Township High School.

Following high school, Michael attended Culver Stockton College in Canton, MO for 3 semesters then transferred to Bradley University in Peoria, IL. In 1964, he graduated with a degree in Business-marketing and retailing.

Mike married Millirose Babcock of Peoria, IL on August 28, 1964. For him it was love at first sight. “Millie” was the love of his life. She preceded him in death on January 6, 2019. They had a blessed 54 years of marriage.

Michael served our country from December 1965 through May 1969 in the U.S. Marine Corps. He fought in the highest level of combat in Vietnam leading his platoon as Captain with the First Battalion 9th Marines. He inherited a platoon that was entirely killed 3 days before his arrival. He was a tremendous leader and most notably he kept his men alive. His leadership philosophy was if your men respect you they’ll do anything for you.

After returning to civilian life he and Millie settled in Green Bay, WI and later in Sister Bay, WI. He began his profession of assessing in 1973 and was hired as Assessor of Northern Door County in 1978 where he resided for 42 years until his passing. He loved his job and retired in 2013.

A significant turning point in Mike’s life was when he accepted Jesus Christ as his Savior July 4, 1976. His wife, Millie, followed this path of faith alongside him and they were baptized. They raised me, their daughter Katyrose, and became foster parents to Brian for a year and then later raised a special needs child, Mark Allen Grignon, as their son for over 18 years.

I, Katyrose Chapman, survive as Michael’s daughter, my husband, Larry, and our children Henry (20), Oliviarose (19), Genavive (15) and Evelyn (9) of East Troy, WI. He loved being a grandfather and rarely missed a birthday with his beloved grandchildren.

Preceding him in death were his father, James Mabin; his parents, Clarice and Merton Walker; his wife Millirose Walker and his sister Marcia (Andy) Diwik.

Michael was a kind man. He belonged to First Baptist Church of Sister Bay. His hobbies and interests included historical preservation and land conservation. He cared very much for our nation and supported many who serve our country defending and protecting our freedoms. He loved cutting and stacking wood, working outside and “puttering” about the yard. He enjoyed filling his feeders for the birds all around his windows and creating obstacle courses for his woodsy “critters” as he liked to call them. He served locally in his community over the years in the American Legion, County Board, Door County Medical Board and Highway Committee. Mike loved reading and saved favorite reflective quotes and tucked them in his desk. He will be dearly missed by our family, his church and his community.

The memorial service and celebration of Michael’s life will be held Saturday, October 23rd at 2:00pm at the First Baptist Church in Sister Bay with military honors. Pastor Mark Billington will officiate. Friends may call at the visitation Saturday from Noon to 2:00pm at the church.

A private burial with family will be held at Little Sister Cemetery following the service.

Casperson Funeral Home is in charge of arrangements.  Sign online guestbook and offer condolences at www.caspersonfuneralhome.com

Memorials may be made in Michael’s  memory to First Baptist Church and will be designated to his favorite charities.