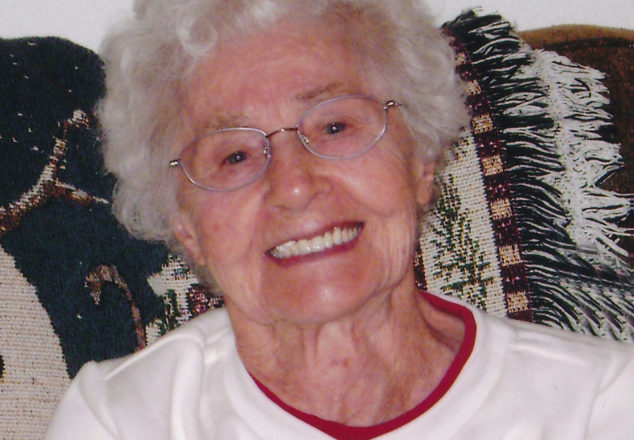 She was born in Egg Harbor, the daughter of Paul and Elizabeth (Miller) Kuehn. Myrtle attended Sunnypoint School. On November 24, 1938, she married Theobald “Butts” Drexler at the Episcopal Church parsonage in Jacksonport.

She came from a musical family and enjoyed playing her home organ so much, going through four of them. Myrtle also enjoyed flowers, gardening, her tulip gardens, traveling with family and taking rides around the county with Butts. She will also be remembered by her family as a very good baker. Myrtle was good at playing cards, especially canasta, gin rummy and solitaire. Myrtle spent many summers picking cherries and apples at her parents’ orchards in Egg Harbor.

She was preceded in death by her parents; her husband; brother, Alvin Kuehn; two sisters, Mildred “Milly” Brungraber and Doris Dier.

Funeral services will be held Monday, May 13, at 11 am at Huehns Funeral Home, with Rev. Reeder Herrick, pastor of Sturgeon Bay Moravian Church, officiating. Burial will be at Bayside Cemetery.

Friends may call after 9:30 am on May 13 at Huehns Funeral Home until the time of the service at 11 am.

Memorials may be given to Sturgeon Bay Moravian Church in her memory.

“We can’t say thank you enough to the caring staff at Cardinal Ridge CBRF who really made our mom feel at home and gave us peace of mind in all aspects of her care, especially in her final days.”

Huehns Funeral Home is assisting the Drexler family with arrangements. Expressions of sympathy, memories and photos of Myrtle can be shared through her tribute page at huehnsfuneralhome.com