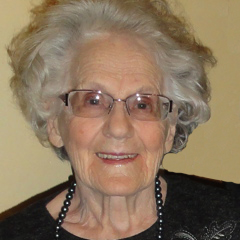 Rita Emily Columb, 93, died on July 4, 2022, at Cardinal Ridge Residential Care, Sturgeon Bay.  She was born on September 5, 1928, to Goldie and Rosamond Nellis and grew up on a large family farm.  She was one of seven children.  She worked hard as a child and was an excellent student.  Rita married Erwin Columb on February 28, 1946, and they had 8 children.  Widowed at the age of 46, she devoted her life to supporting and caring for her family.  Throughout her parenting years, and thereafter as well, Rita faced the trials and tribulation of life with great fortitude, strength, and courage.

In her retirement years, Rita was an avid reader, frequently finishing off 1-2 books a week.  Rita had an excellent memory of past events and a natural talent for record keeping.  She managed her financial affairs and filed her own taxes right up to the end.  She collected hundreds of recipes over the years and made countless wonderful meals for family gatherings.

Many thanks to the amazing and kindhearted staff at Cardinal Ridge, together with the wonderful hospice staff, for so tenderly caring for Rita’s spiritual, emotional, and physical needs through the final stretch of her life.  Special thanks to Jessica Winograd, “adopted” granddaughter and Amy Hayes, special neighbor friend, for their many kindnesses.  Rita’s journey on this earth has ended.  May she rest in peace knowing that her legacy lives on within the “village” of offspring she so lovingly brought into this world.

In accordance with Rita’s wishes, private services will be held at the Shrine of the Good Shepherd Mausoleum in Green Bay at a later date.